DirtFish drivers, Conner Martell and James Rimmer along with the entire DirtFish Motorsports team made their way to America’s Playground for rounds eight and nine of the 2017 Red Bull Global Rallycross season. Known for it’s high stakes games, fast-paced lifestyle and picturesque boardwalk, Atlantic City is an ideal location for the high horsepower and fast-paced action of rallycross. This was the second year in a row that GRC has been back to this location, creating excitement within the local community to see their favorite drivers battle for the top spots all over again.

Crisscrossing the abandoned runways of Bader Field, the Global Rallycross track designers had put together one of the most exciting and high-speed, yet technical layouts of the season. From the starting grid, the competitors power down the front straightaway to make it through the tight turn one ahead of each other. After another long straight, the dirt section begins with a sharp right-hander that leads into a long, loose 180° turn. To the two DirtFish drivers, this turn resembled one they have spent a lot of time training on at the DirtFish HQ, so they had a pretty good idea of what they needed to do to make it through it as quick as possible. The dirt section continues through two quick, linkable corners that set the drivers up for the seventy-foot jump and down onto another very fast straightaway. The final turn of the track is where competitors have the option to take a shortcut through the Joker Lap, which if timed properly, would allow them to move up in positions right before crossing the finish line. 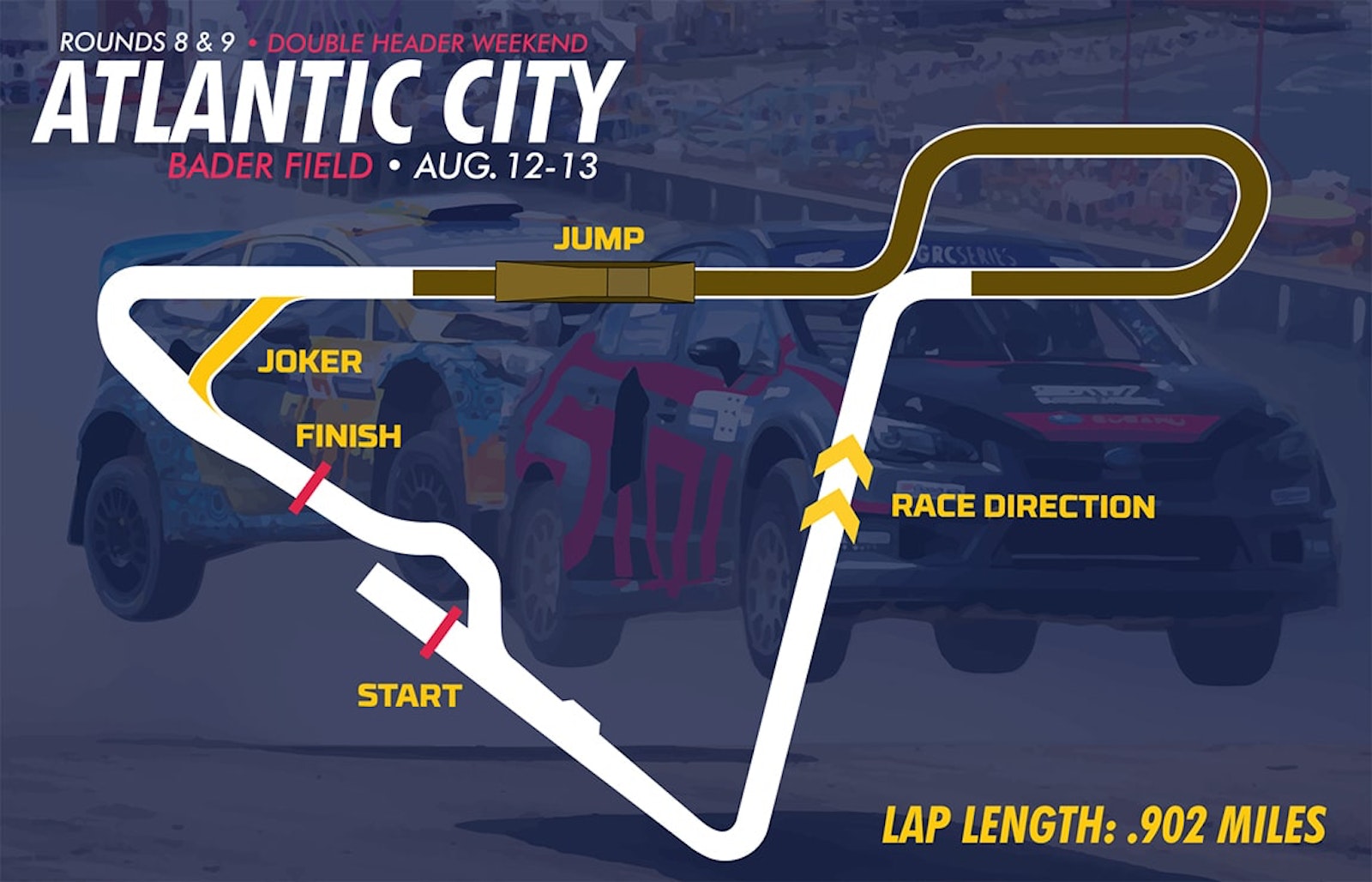 To kick off the weekend, Conner and James had the opportunity to take a couple of members from local media/radio broadcast companies for rides around the track in their GRC Lites cars. While they have done this at every race so far this year, James’ passenger, Rachel Viggiano from WPUR Cat Country 107.3 had some of the best reactions we have seen all season! Watch the video below to see her eyes double in size during the lap:

Later that evening, the teams and drivers gathered on the iconic Atlantic City Boardwalk to meet the fans and sign a handful of autographs. This was a great time to interact with the residents of the city and promote the race happening the following two days.

On Saturday, practice sessions began early, allowing Conner and James to get a feel for the track and multiple surfaces it had to offer. Both of them were very happy with not only how the track felt, but also both car setups. This gave them both confidence heading into the first qualifying session of the weekend. James was driving very well, putting down one of the best qualifying laps of his season, qualifying in third place!

Heat race number one was eventful for both drivers. Conner jumped the start and was required to do a stop-and-go penalty, forcing him back to the third position. James was plagued with an incredibly foggy windshield due to 98% humidity and rain that day, which progressively got worse as the heat race went on, causing him to lose a vast amount of time and finish in fourth. 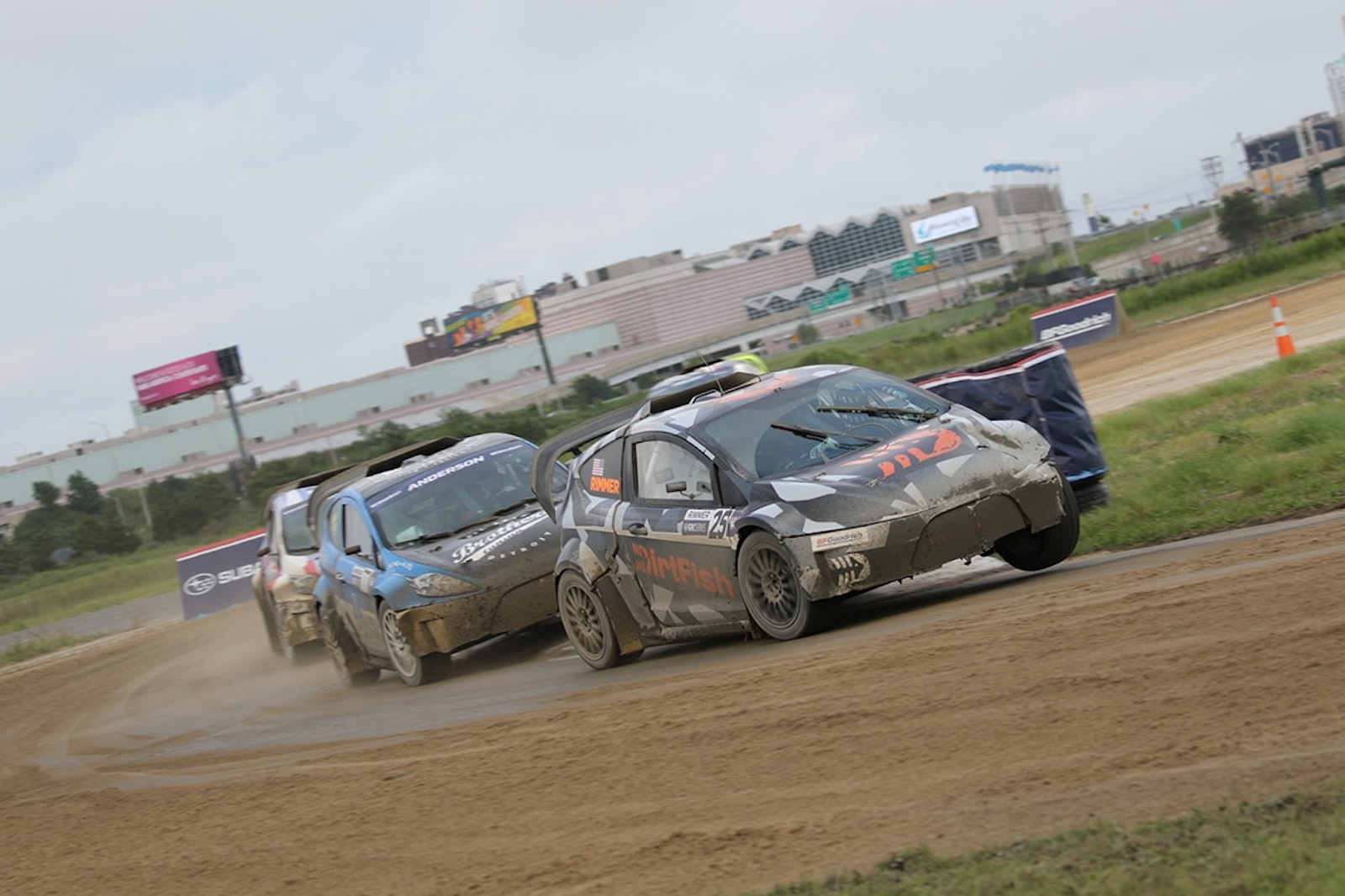 Following the first heat races, the day became interesting for all the teams and drivers. After holding off most of the morning, the skies opened up and the track was drenched with an hours-worth of hard rain. This made the entire track slick and unpredictable, especially in the dirt section. Thanks to all of the time spent behind the wheel at DirtFish, the slick and tricky conditions catered to the two DirtFish drivers. Unfazed by the water on the track, Conner set himself up great from the start of the second heat race to move into the number one position and pull away from the competition the entire race. He finished ten seconds ahead of the only other competitor who finished.

Pitted against the top Lites drivers and a still wet track, Conner and James had their work cut out for them in the semifinal. Both drivers fought difficult battles through the entire race; Conner with Cyril Raymond and James with Alex Keyes. Raymond was penalized for making contact with Conner, causing him to spin. Conner still finished in second place though, which gave him a P1 starting position for the final race. James spent the entire semifinal trading positions with Keyes, even laying down one of the fastest lap times of the day out of all drivers! 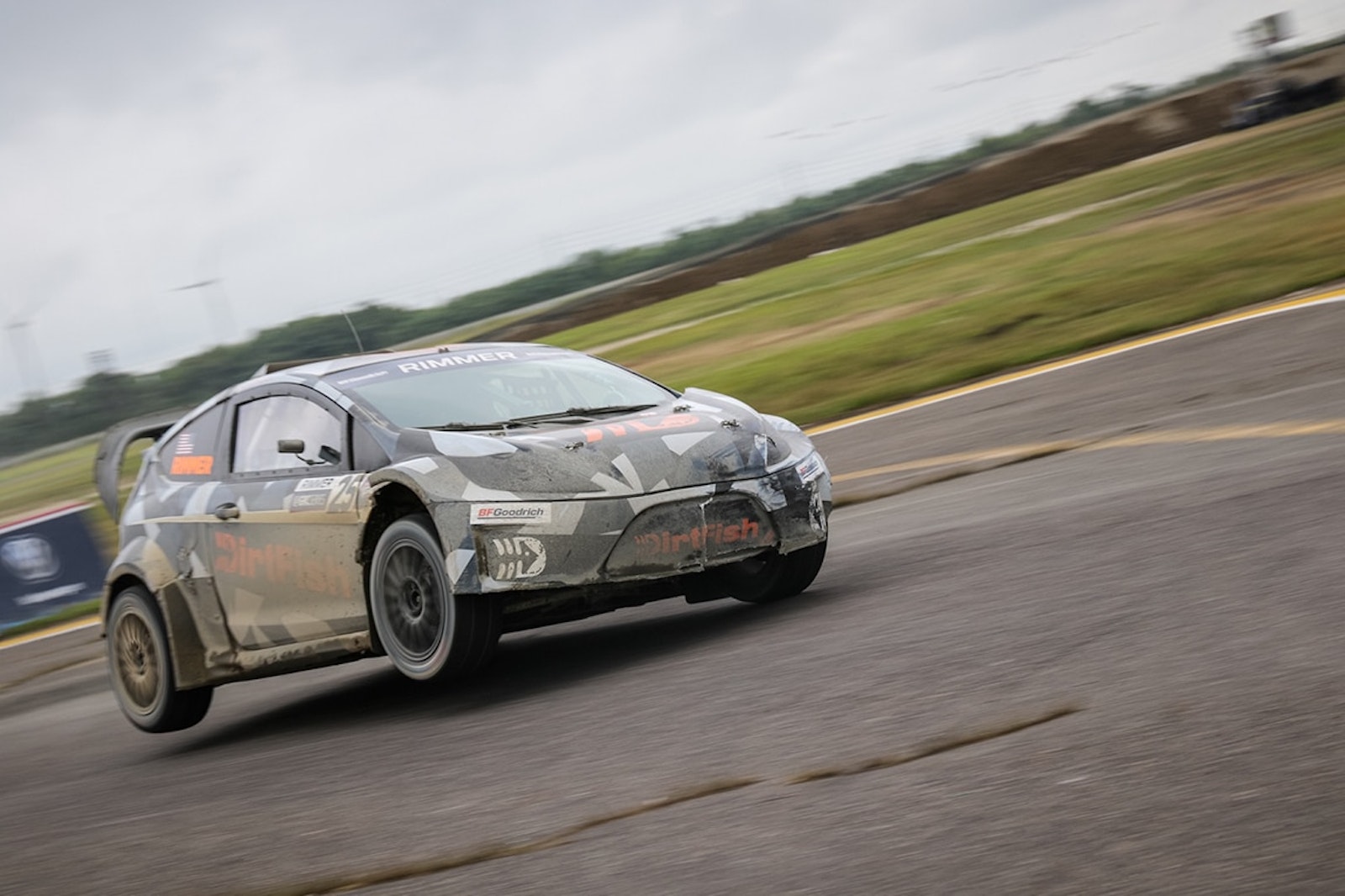 At the start of the final race on Saturday, Conner jumped into the lead right from the beginning with Raymond right on his rear bumper. As Conner entered turn two, he made a small mistake that left a gap open for Raymond to sneak past him and take the lead. While Conner was attempting to gain some time on Raymond, he lost his momentum after hitting a tire stack, allowing Raymond to increase his lead and ultimately win the race. This gave Conner his fourth podium finish of the 2017 season. James also had another great battle for third place throughout the entire final. Unfortunately, two drivers took the Joker on the final lap and just barely made it past James, pushing him off of the podium and into the fifth position.

The entire team and members of Conner’s family were ecstatic to see him on the podium again and nearly putting an end to Raymond’s winning streak! Little did they know what he had in-store for them on Sunday…

The following day, the morning sun broke through the clouds to help dry out the track from the previous day and overnight downpours. That was just the beginning to a tremendous day. The track was dry, the temperature was high and the fans were back to watch more rallycross action. 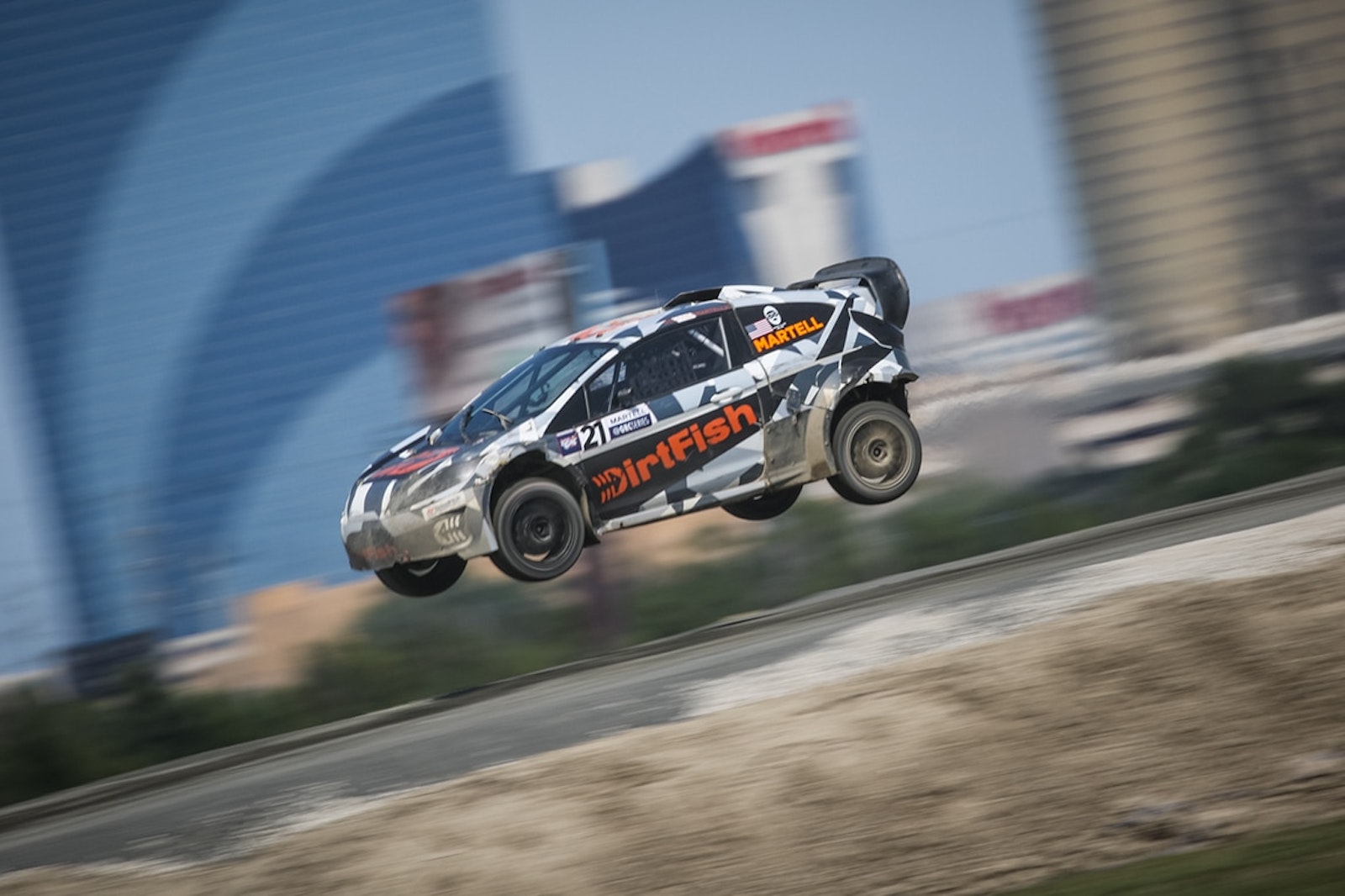 Throughout the day, James was plagued with a streak of bad luck, including electrical problems, contact with other drivers breaking parts and mistakes that he made. While he finished second in heat one, he was unable to advance through the Last Chance Qualifier to the final race.

Conner’s successes added up throughout the day with a second place in heat one to start off the day and a third place in heat number two. In the last semifinal race of the weekend, he was able to get a great launch when the lights went green. With that, he jumped straight into the lead leaving him with nothing to do but hit his marks on every turn and make sure Alex Keyes didn’t slip past him through the six laps.

The semifinal win gave Conner a huge boost of confidence heading into the final race of the day and final race of the weekend. On the grid of the final, Conner was in the second starting position. This meant that with a solid launch, the only thing that would be standing in the way of a win would be Cyril Raymond. A solid launch is exactly what he had! Conner and Raymond were side-by-side all the way down the front straightaway, through turn one and up the second straightaway. As they continued to drive evenly into the second corner, Conner slipped up the inside and moved into the number one position. He increased his lead through the second corner to give himself a wide open track to pull farther ahead. There was only one more factor that would decide if he remained in the lead – the Joker Lap. Conner took the Joker right off the bat, and so did Raymond surprisingly! This meant that all he needed to do was drive clean and smooth without leaving the door open for his rival to make a pass. That is exactly what Conner did, crossing the finish line nine laps later in the number one position and ending Raymond’s dominating streak. To top off the win, Raymond had car problems through the final turn allowing four more competitors to pass him before coasting across the finish line. Because of that, Conner made a huge move up in the championship points. He now has an opportunity to finish the season with a Driver’s Championship he has chased for the last two years. 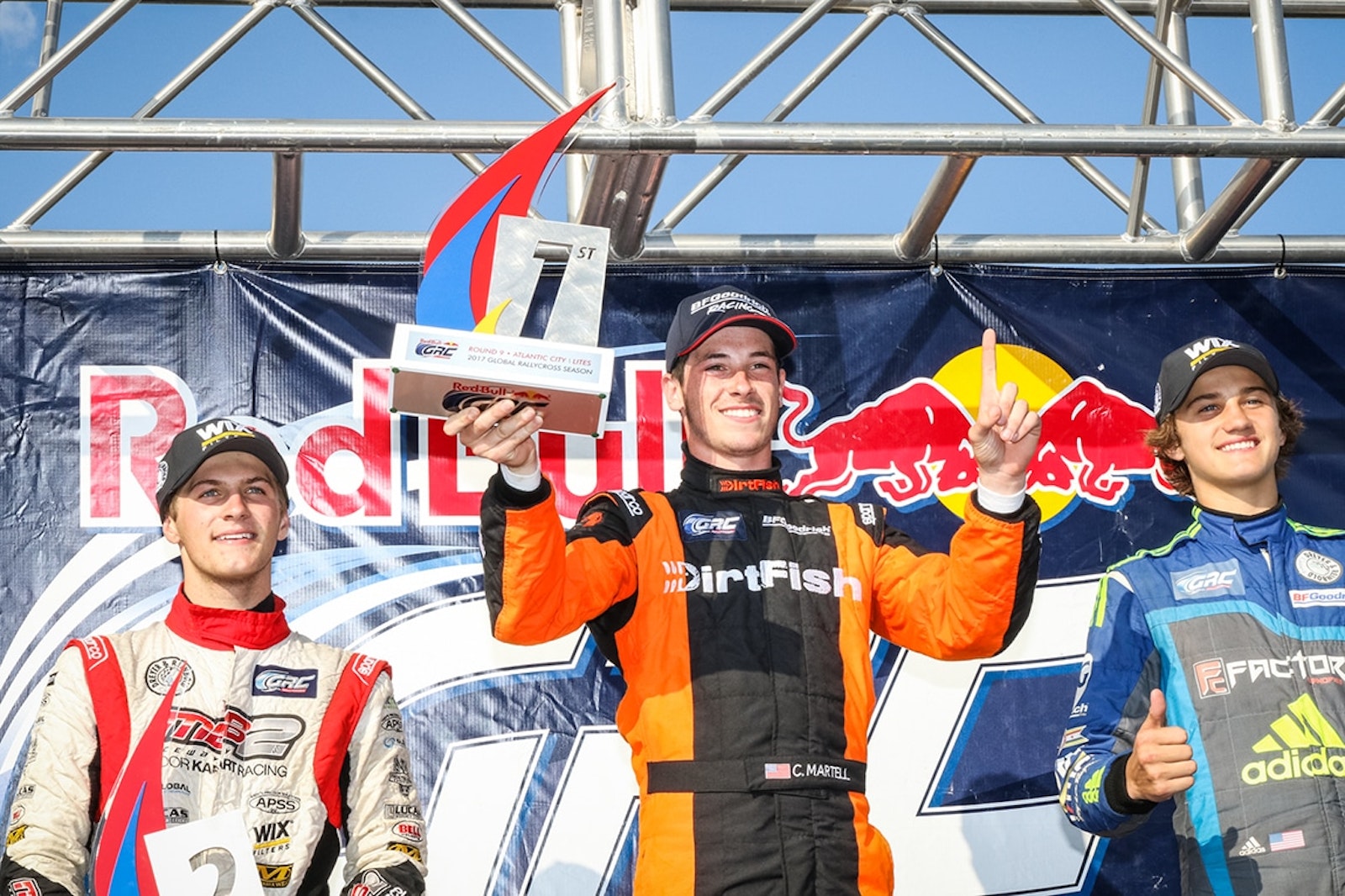 With only three rounds remaining in the 2017 championship, Conner will need to be at the top of his game if he hopes to keep his championship chances alive. He has proven that he has the skill to make it happen and we are confident that he will!

The next two races will be held in the home of DirtFish- Seattle, Washington on September 9th and 10th at Evergreen Speedway. In the meantime, pay attention to the preparation of Conner, James and the DirtFish team by following along on social media!

Follow the team and drivers throughout the weekend on their social media accounts: