Subaru Motorsports USA showed off the impressive speed of the WRX STI rallycross cars at Round 4 of the Americas Rallycross (ARX) season, with a dominant qualifying performance from Patrik Sandell and lap times that exceeded even the World Rallycross cars competing at Quebec’s Grand Prix de Trois-Rivières. Championship leader Scott Speed fought through adversity in the semi-finals to earn a third-place finish in the final, maintaining the overall lead in pursuit of his fifth U.S. rallycross title.

Saturday’s free practice and first two qualifying rounds offered the first opportunity for the Subaru Motorsports USA team to compare the pace of the WRX STI against the World RX cars in attendance for the Canadian round of the world championship. After an open practice session that put the ARX and World RX cars on the track at the same time, a pair of Subaru drivers – Sandell and Speed – sat atop the time sheets, outpacing all the world championship contenders. Sandell continued his dominance through the weekend’s qualifying sessions despite an engine issue in Q2 that briefly dropped him out of the qualifying points lead, consistently notching lap times that kept the ARX field – and the World RX teams – behind him.

Adversity would crop up for both Sandell and Speed in the semi-finals, a reminder that rallycross is fickle even for the fastest cars and drivers. Sandell’s car tapped a wall under braking, dropping him out of first place in the first semi-final heat, while Speed led his heat from the start before a transmission failure in the final corners dropped him to third. The Vermont SportsCar team executed a 15-minute gearbox change to get Speed’s car back on the track for the final, and the defending champion was able to fight through traffic from the back row of the grid to earn a hard-fought third-place finish. Teammate Chris Atkinson, who had made setup changes and improved his speed from Saturday to Sunday, notched fourth overall. 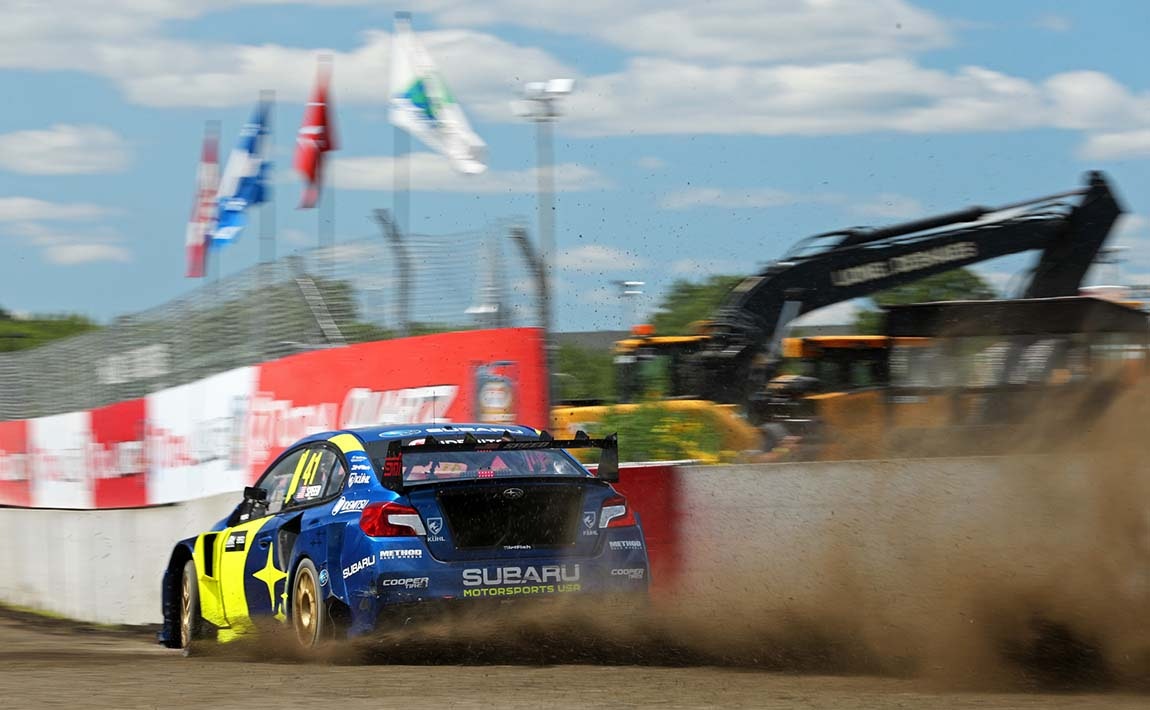 “Not the finish we were expecting after running in first in the semi, but a great effort by the team to get the car into the final so we could earn some points.” Speed said after the final. “To come from basically last to the podium was certainly nice! Everybody has bad luck, and the trick is to keep making good decisions – that type of execution is how championships are made.”

“Subaru Motorsports USA showed the whole world amazing speed all weekend long!” said Sandell. “I’m disappointed we couldn’t get another win, but we’ll be back on top of the podium soon. Rallycross is a tough sport, even when you have a fast car, and we just have to keep fighting.”

Subaru of America, Inc. (SOA) is a wholly owned subsidiary of Subaru Corporation of Japan. Headquartered at a zero-landfill office in Camden, N.J., the company markets and distributes Subaru vehicles, parts and accessories through a network of more than 630 retailers across the United States. All Subaru products are manufactured in zero-landfill production plants and Subaru of Indiana Automotive, Inc. is the only U.S. automobile production plant to be designated a backyard wildlife habitat by the National Wildlife Federation. SOA is guided by the Subaru Love Promise, which is the company’s vision to show love and respect to everyone, and to support its communities and customers nationwide. Over the past 20 years, SOA has donated more than $145 million to causes the Subaru family cares about, and its employees have logged more than 40,000 volunteer hours. As a company, Subaru believes it is important to do its part in making a positive impact in the world because it is the right thing to do.