Subaru Motorsports USA driver Scott Speed topped the podium at the 2019 Americas Rallycross (ARX) season-opener at the Mid-Ohio Sports Car Course, closing a dominant weekend with a wire-to-wire winning drive in the final race. Speed and teammate Chris Atkinson ensured an all-Subaru front row in the final by winning both of Sunday’s semi-final heats, showing off the pace of their WRX STI rallycross cars and paving the way for Speed’s victory in his first-ever race with Subaru. 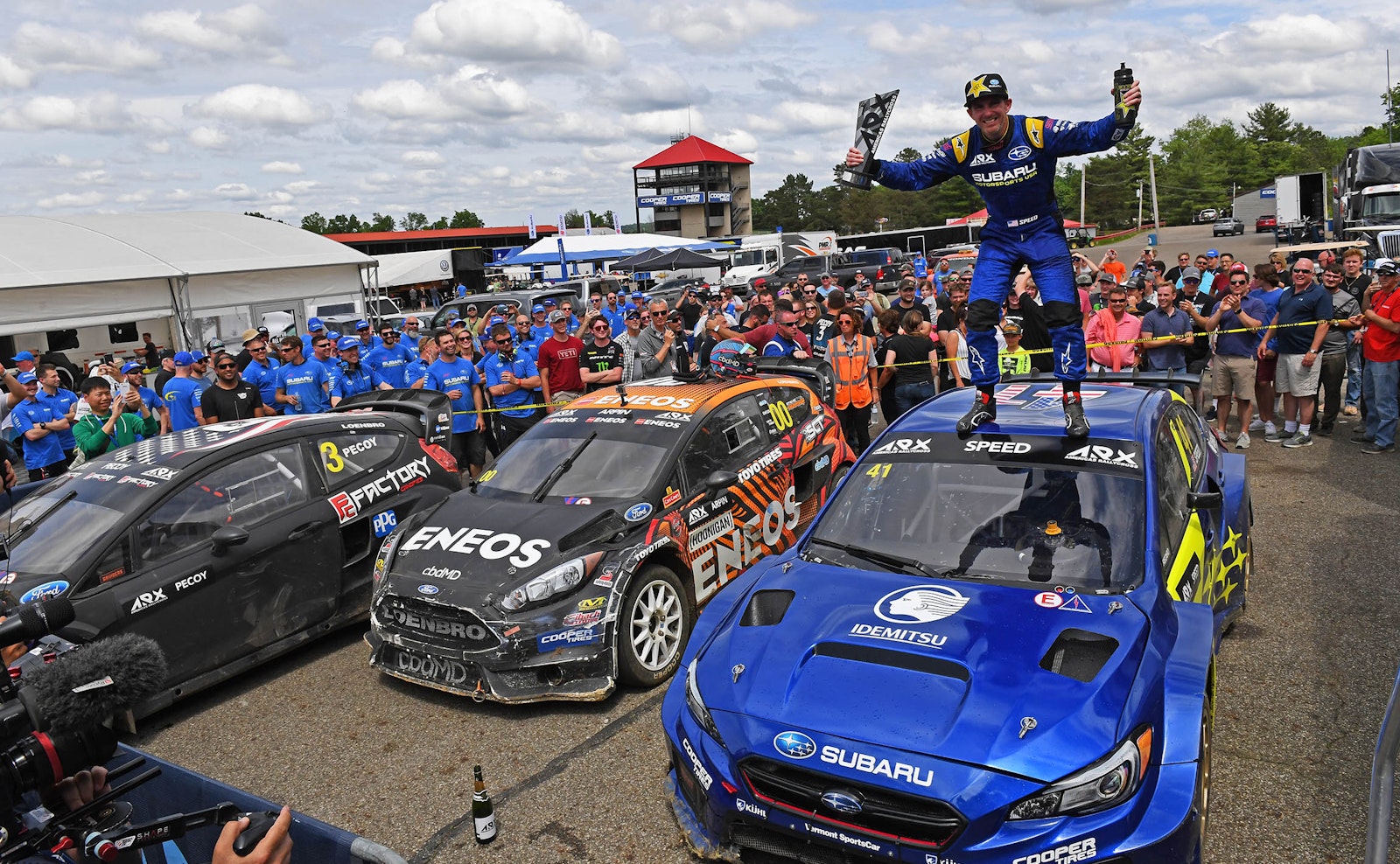 The Subaru team came into the 2019 season’s first event with a new lineup – adding four-time U.S. rallycross champion Speed to the pairing of Atkinson and Patrik Sandell – and new liveries featuring the Subaru brand’s classic blue and gold motorsports colors. Speed set the tone early by winning Saturday’s first qualifying session, while Atkinson and Sandell locked up third and fourth. After damage to both Speed and Sandell’s cars from contact in the second qualifying round, Speed finished the day in second position and Atkinson held third.

With Speed’s car taking the heaviest damage from a multi-car collision, the Vermont SportsCar (VSC) technicians worked deep into the night to put both his car and Sandell’s back on the grid for more strong qualifying results Sunday morning. The semifinals were all Subaru, as Atkinson pushed past qualifying leader Tanner Foust to win the first race and Speed stayed fast and clean from the pole position to win his as well. All three Subaru cars would make the final, with Speed and Atkinson up front and Sandell in row three. The final race was again heavy on contact, but Speed made it through unscathed from pole position and took the win for Subaru.

“What an incredible weekend! I can’t tell you how much it means to me to represent Subaru like this,” said Speed. “And to win with these colors, it’s a real honor. The whole team worked so hard last night getting the car ready after that hard hit in qualifying – I’ve been saying for awhile that we have the fastest car out there, and today just proves what we can accomplish.”

For Subaru Motorsports USA and Vermont SportsCar, the weekend’s win is a breakthrough after a challenging period in rallycross. The Subaru team persevered through a tough campaign in 2018’s inaugural ARX season, building speed throughout the year but finishing without an event win. Only Sandell’s third-place finish in the championship showed the true potential of the rallycross WRX STI, and the team was hungry to compete for the top spot in 2019. 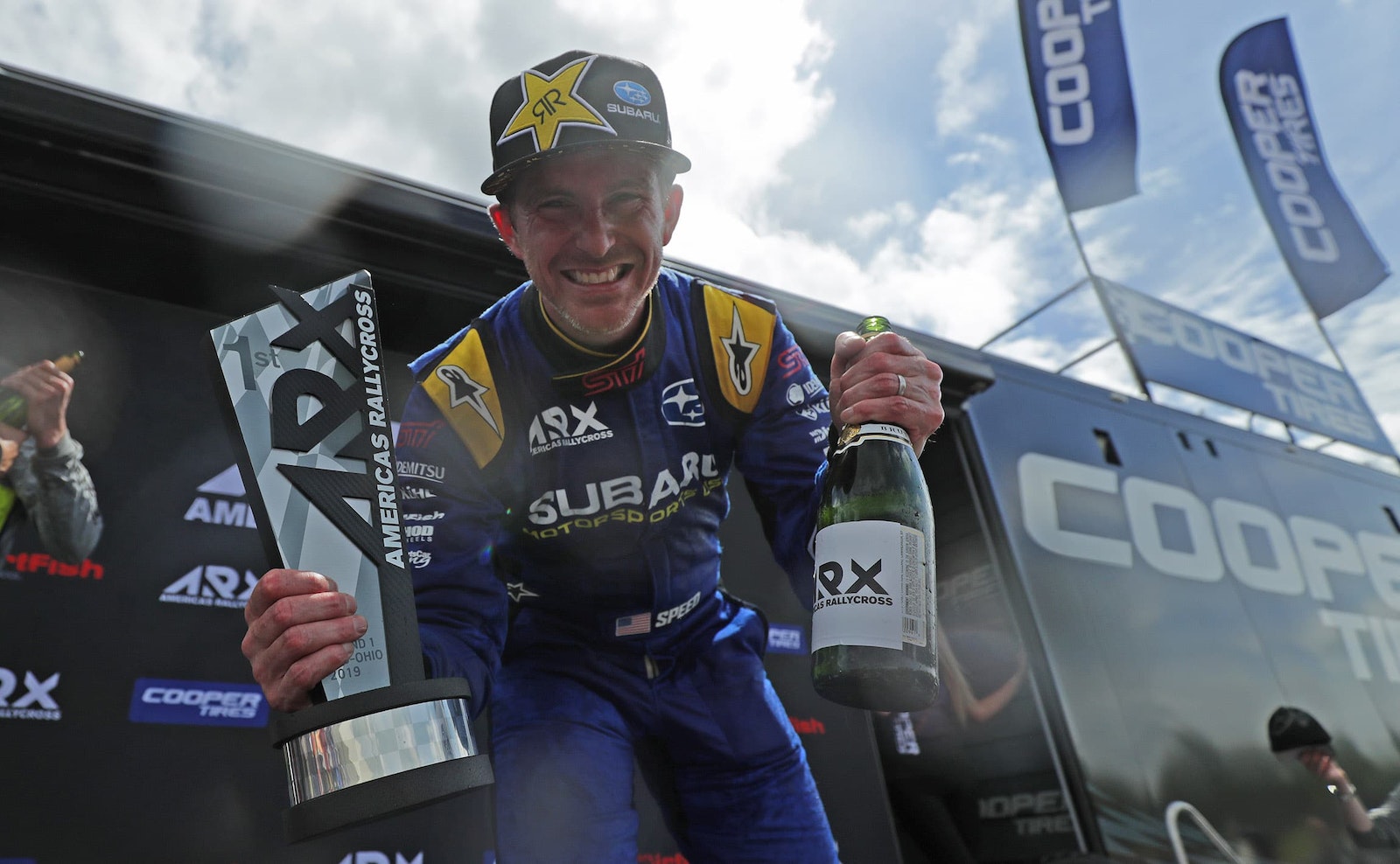 “This win is the culmination of a lot of effort and support from Subaru, with the return of the blue and yellow colors plus bringing Scott Speed to the team,” said Lance Smith, team principal of the Subaru Motorsports USA rally and rallycross effort. “It makes it so much more special and fun for us to be on top of the podium after all the challenges the last few years.”

The Mid-Ohio win marks Subaru’s third victory in eight days after a dominant 1-2 finish by teammates David Higgins and Travis Pastrana at Oregon Trail Rally and a Class 5 win at Mexico’s Baja 500 with the Crosstrek Desert Racer.

Atkinson, Sandell and Speed will return to the WRX STI rallycross cars July 13-14 at the ARX doubleheader event at Illinois’ Gateway Motorsports Park.

About Subaru of America, Inc.
Subaru of America, Inc. (SOA) is a wholly owned subsidiary of Subaru Corporation of Japan. Headquartered at a zero-landfill office in Camden, N.J., the company markets and distributes Subaru vehicles, parts and accessories through a network of more than 630 retailers across the United States. All Subaru products are manufactured in zero-landfill production plants and Subaru of Indiana Automotive, Inc. is the only U.S. automobile production plant to be designated a backyard wildlife habitat by the National Wildlife Federation. SOA is guided by the Subaru Love Promise, which is the company’s vision to show love and respect to everyone, and to support its communities and customers nationwide. Over the past 20 years, SOA has donated more than $145 million to causes the Subaru family cares about, and its employees have logged more than 40,000 volunteer hours. As a company, Subaru believes it is important to do its part in making a positive impact in the world because it is the right thing to do.