Although Americas Rallycross has a shortened schedule for 2018, there is no shortage of iconic racing locations. The Silverstone Circuit in the United Kingdom hosted round 1. Round 2 was held at Circuit of the Americas in Austin, Texas and round 3 took place this past weekend at the legendary Grand Prix Trois-Rivières circuit in the French-Canadian province of Quebec. The track that the organizers had put together is by far one of the best North American tracks that the teams have ever visited. It was a proper rallycross track that featured a long front straightaway, large dirt section, elevation changes and a joker lap that would turn out to be a serious deciding factor in many of the races. 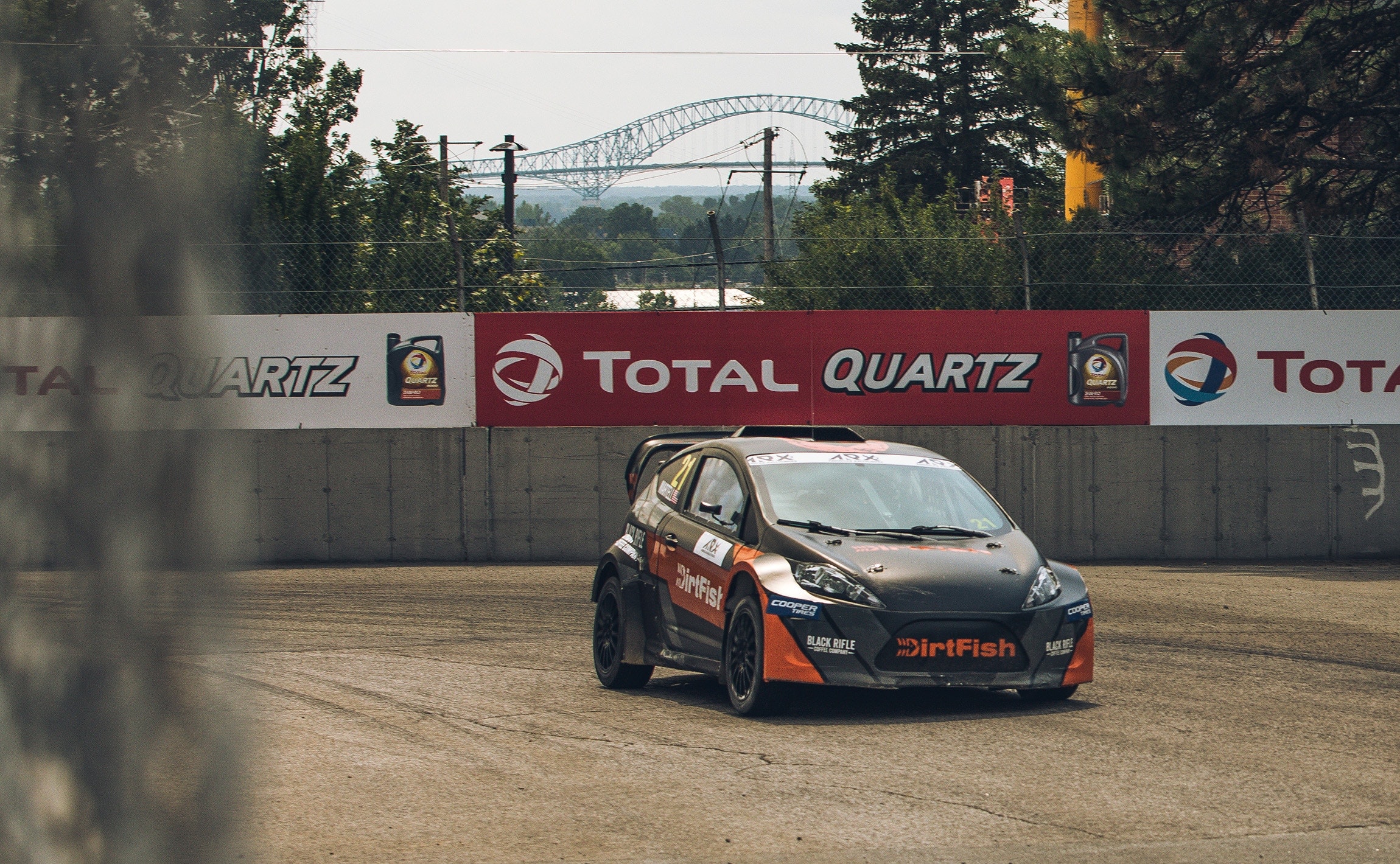 For the supporting ARX2 series and DirtFish Motorsports, the Canadian stop played host to an action-packed double-header. As if the weekend couldn’t get any busier, the massively popular FIA World Rallycross championship would be competing on the same track with legendary drivers like Petter Solberg and Sebastian Loeb. 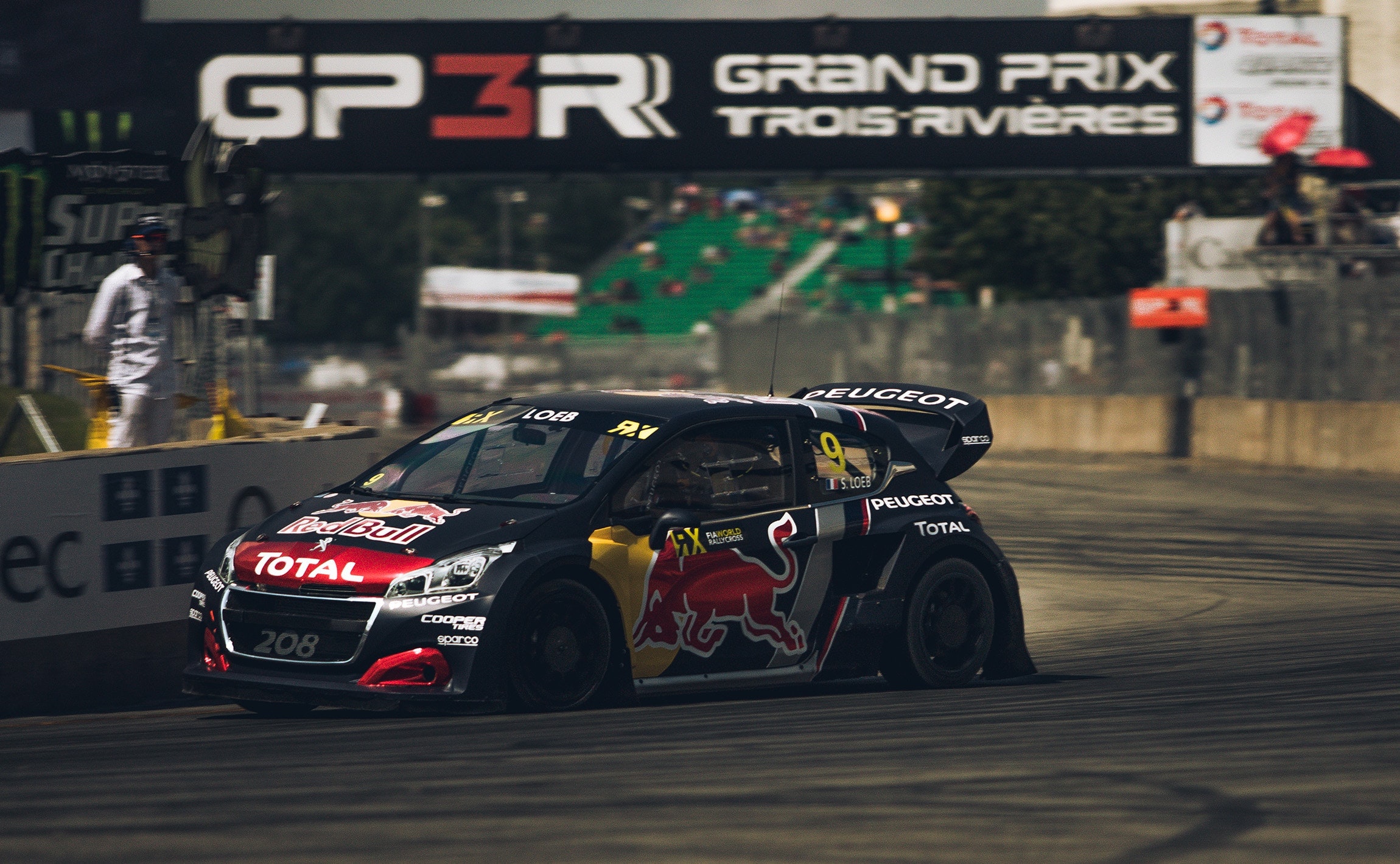 The weekend began on Friday evening with a parade down the main Rue des Forges that lead to an autograph session at the waterfront in downtown Trois-Rivières. Fans lined the streets, packed restaurant patios and watched from the balconies while the ARX and World RX cars put on a show; revving their engines and doing launches. The organizers enticed the massive number of fans with even more action featuring motocross, drifting and other extreme sports demonstrations.

The following day was one of the busiest race days that the DirtFish Motorsports team had seen in a very long time! Saturday’s racing began with a small practice session, then straight into the three qualifying races. Each race was extremely exciting, resulting in wins from three of the four DirtFish drivers; Conner Martell, James Rimmer and Scott Anderson. Whether it was due to the rough racing surface, or what ended up being a game of bumper cars, all four drivers experienced some mechanical problem. During Q1, Fraser McConnell experienced the worst of it when he was sent into the wall on the front straightaway, immediately following the start of the race. The car had serious damage and would need a massive amount of work to compete in the day’s remaining race. The team of mechanics made short work of it and had the car ready to go for the following two rounds of qualifying. 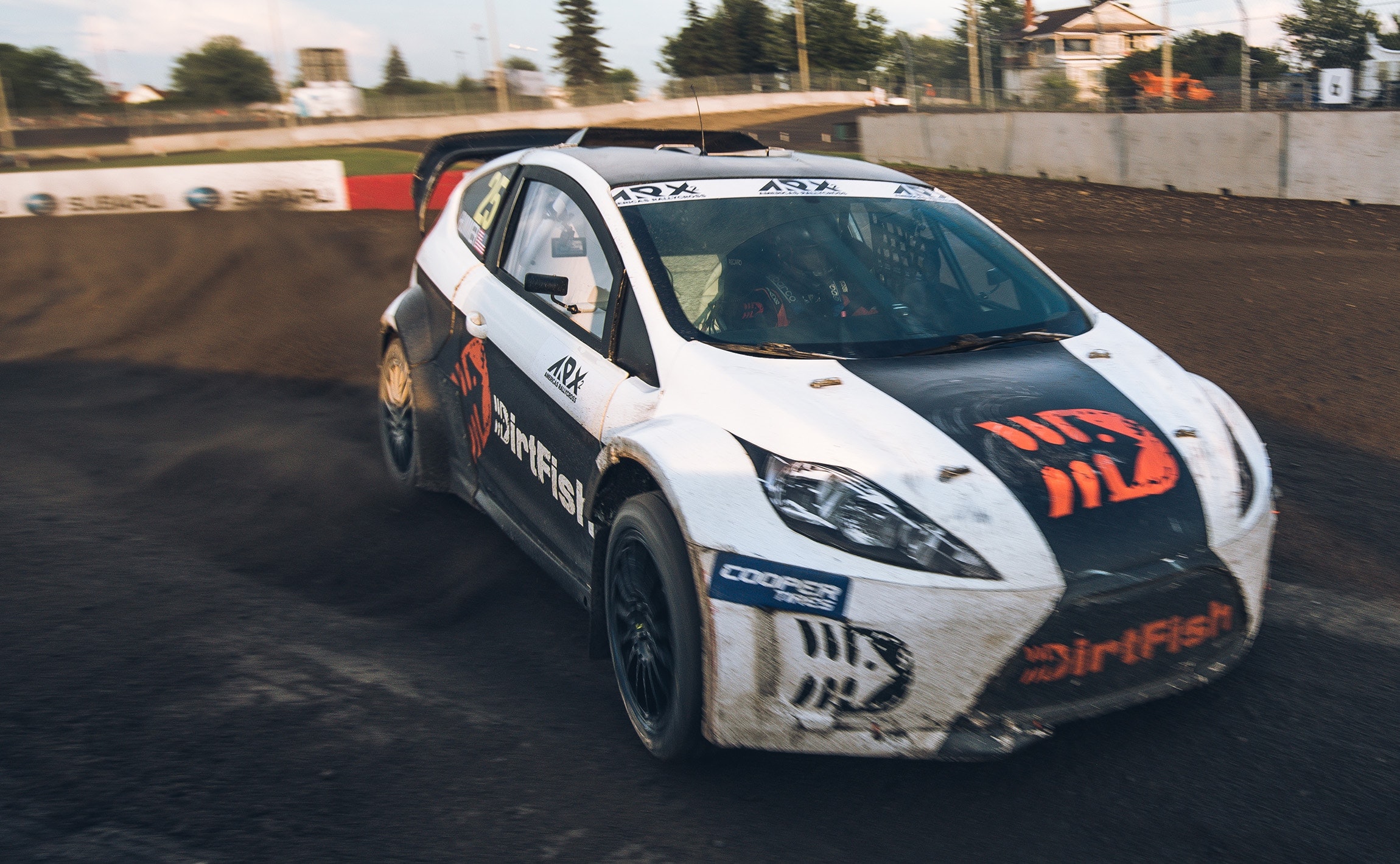 Next up were the two semifinal races. Conner showed some of the best race craft of the weekend during his semifinal! After a hard impact that he took in the previous qualifying race, the alignment on his car was quite off, resulting in his car crab walking down the track for the entire race. Although the car wasn’t 100%, he was still able to hold off the competition to win the semifinal by two and a half seconds. James finished two positions behind in third place, allowing him to advance to the final. Unfortunately, Fraser and Scott both experienced impacts and mechanical issues that didn’t allow them to finish their respective races.

Saturday’s Final was one of the least eventful races of the weekend, but one of the best for Conner and DirtFish Motorsports. He took the lead right from the start with one of his notoriously perfect launches and beat the rest of the field into the first turn. From then on, he continued the perfection, leaving the other drivers to compete behind him, ultimately winning his second ARX2 race in a row, and moving up in the championship standings. 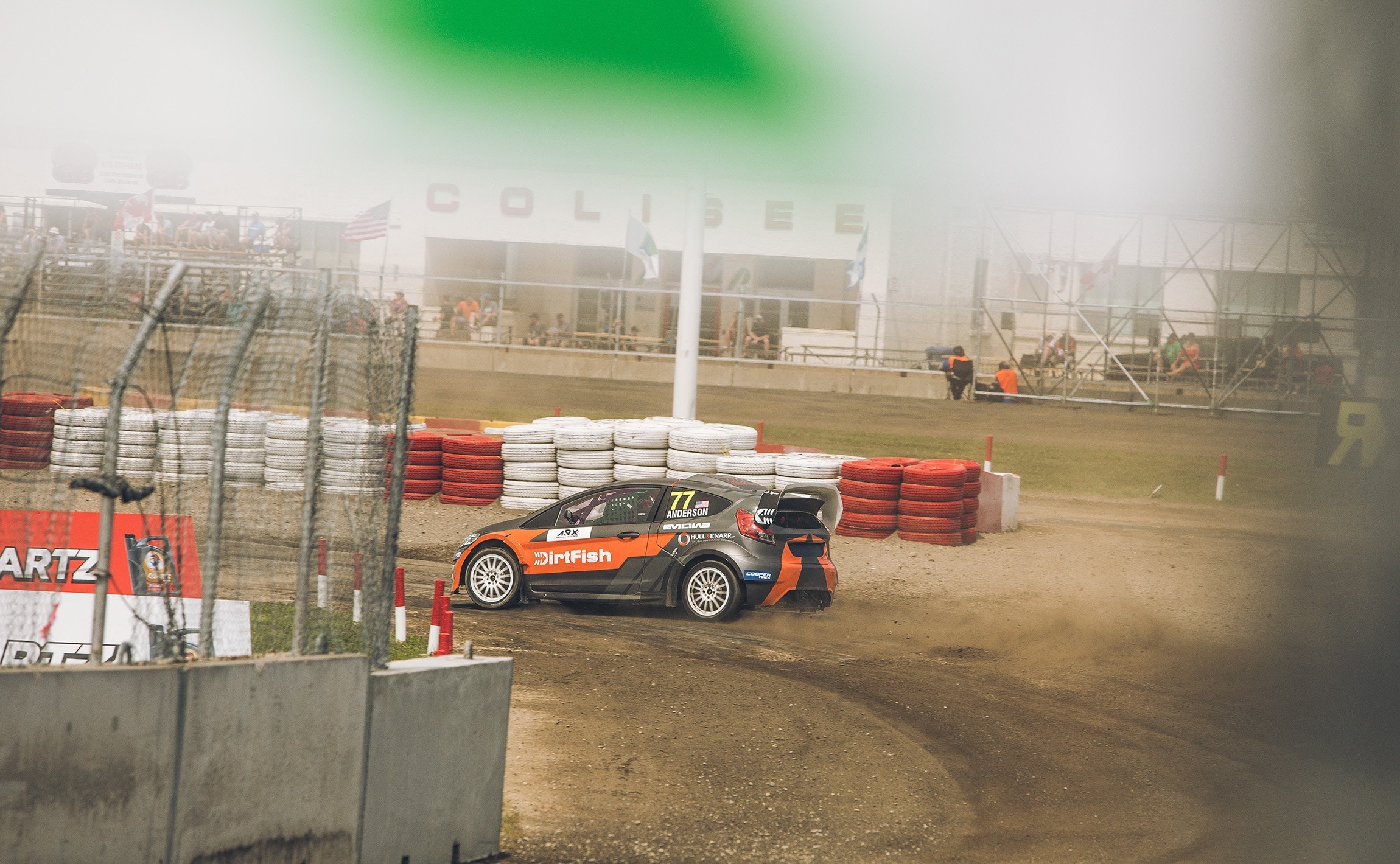 Because of the damage incurred on all four cars throughout the day, the DirtFish crew had their work cut out for them on Saturday evening. Every single person on the team worked hard for hours straightening and replacing everything from clutches and control arms, to wiring and body panels. By the time midnight rolled around, the cars were back to race-ready condition for the following morning.

Sunday was another day full of success for DirtFish and the DirtFish drivers, and one of the best days in the history of DirtFish Motorsports. Out of the six qualifying rounds, there was a DirtFish driver in the top three at the end of each one. And, as if that wasn’t good enough, three of the fours drivers won at least one of the qualifying races each. 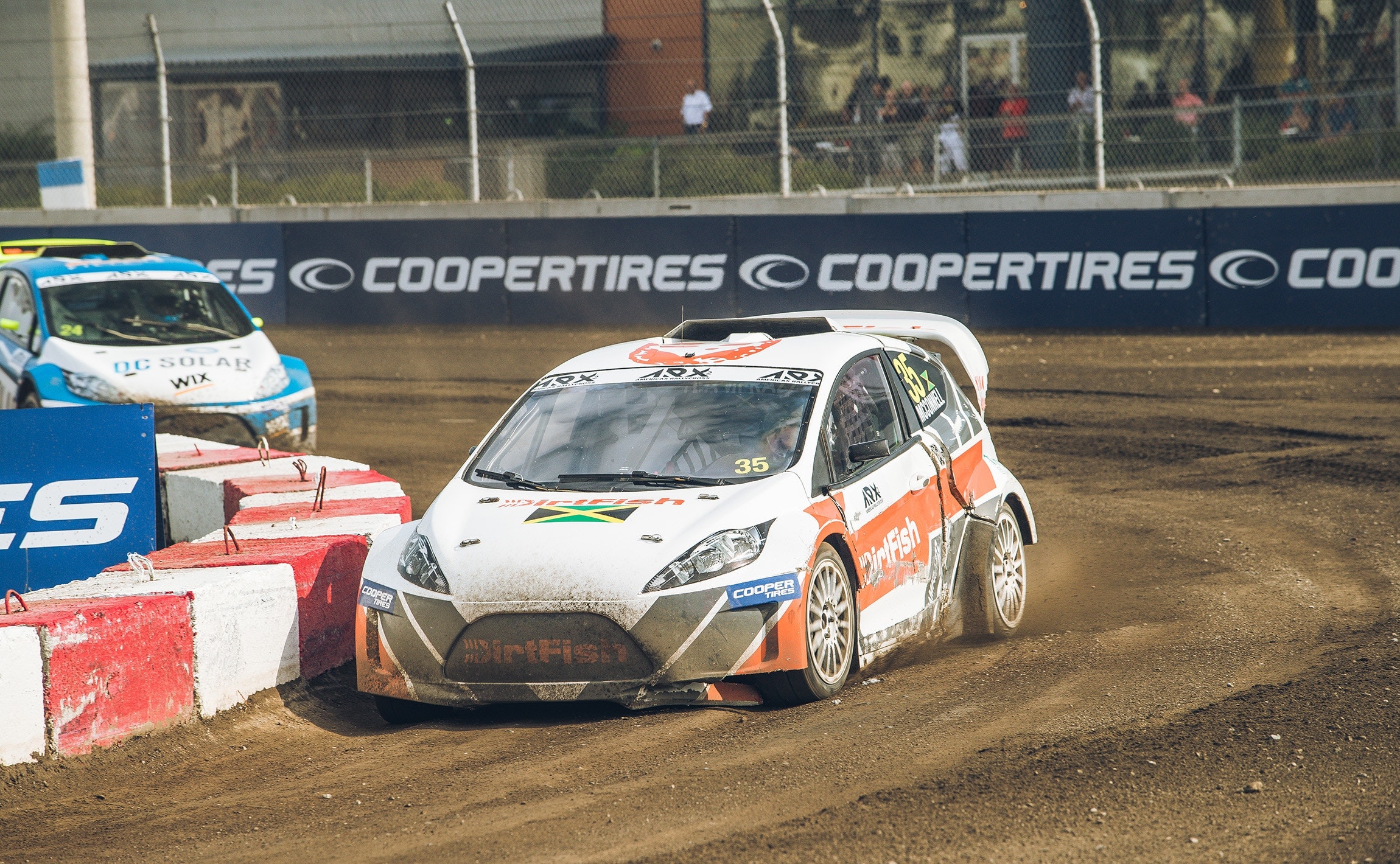 During the semifinals, things started to get interesting. Fraser was battling hard for a position at the start and was squeezed between another driver and the wall, bending a piece of his front left suspension. Luckily, he was able to continue racing and kept up with Matt Carpoff who was sitting in P3… until Carpoff left the door open in turn 4, and Fraser was able to take advantage and make the pass, advancing him to the final. The following semifinal race pitted Conner, James and Scott against each other. All three drivers had near-perfect starts and immediately moved into positions one, two and three. Cole Keatts was experiencing gearbox issues that forced him to retire and handed the three DirtFish drivers positions in the final race of the day.

The final race of the weekend was one the most important milestones in DirtFish Motorsports history. With all four drivers qualifying for the final, they occupied two-thirds of the starting grid. Conner started from the first row with a decent start but was beaten to the first corner by Christian Brooks. That is where one of the best battles of the weekend began. Brooks was having the drive of his life, pushing hard and fending off Conner around every corner. Conner and his spotter decided to have him take the joker lap on the third lap with the hopes of giving him clear air and put down fast lap times without Brooks knowing where he sat. The following laps Brooks pushed hard through the joker, exiting just in front of Conner and narrowly keeping his lead. Conner responded with steady driving, ultimately putting pressure on Brooks who went wide on a tight corner and that’s when Conner made his move, passing him on the inside and taking the lead! From that point on, Conner sealed his win by protecting the position and crossing the line in 1st place for the third time this season. The rest of the DirtFish drivers finished in 4th, 5th and 6th. 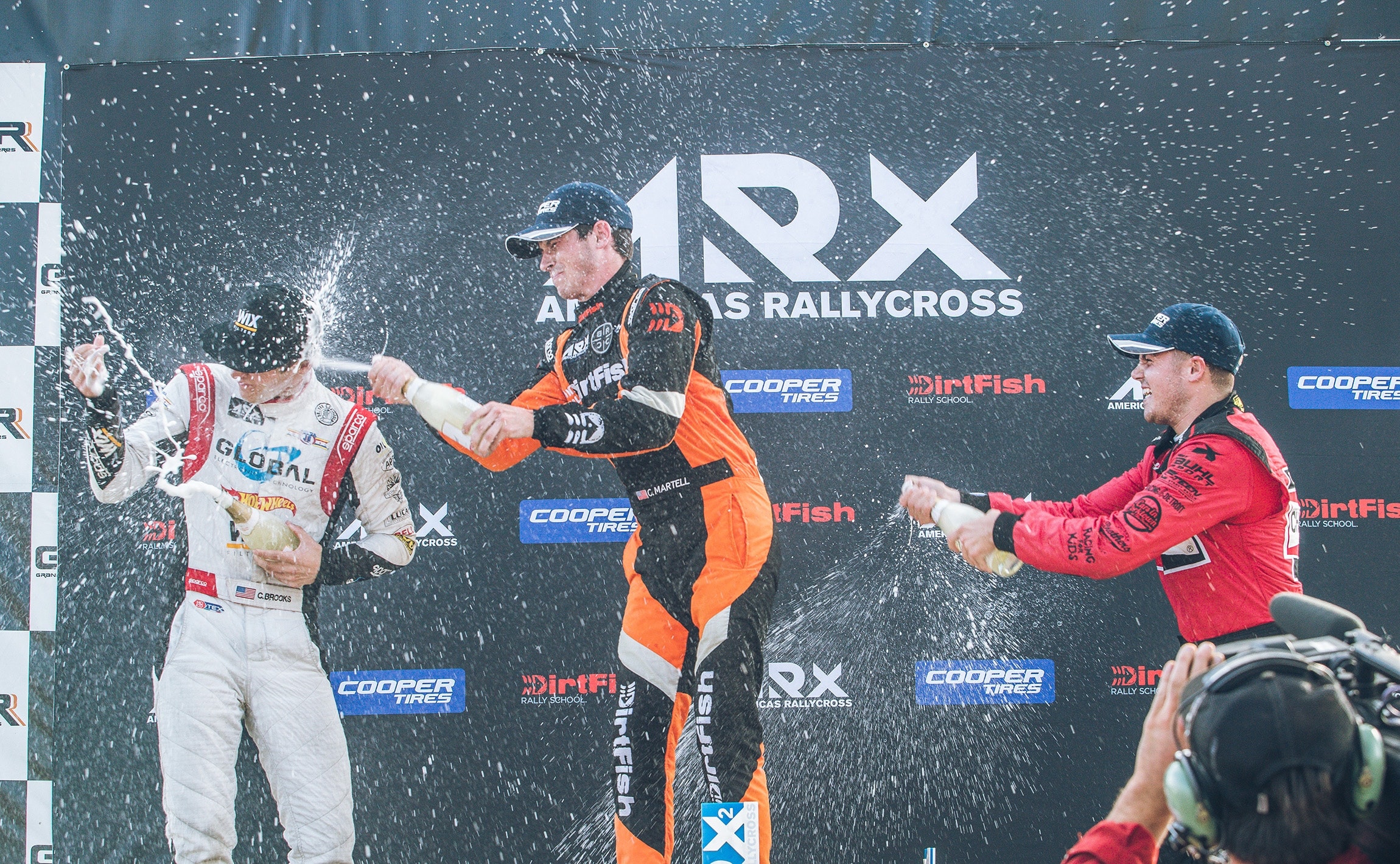 Thanks to Conner’s amazing driving and the team’s hard work, he has maintained and increased his championship lead. James Rimmer is now tied for third in the overall points with Scott and Fraser only a few points behind. With the conclusion of the season coming up at the end of September, the DirtFish Motorsports team will only have one more chance to dominate, move up in the championship standings and bring home their first ever championship win.

Americas Rallycross heads back to Austin, Texas for the final race of the season on September 29th and 30th at Circuit of the Americas.