For DirtFish Motorsports, it has been a very long offseason since the 2017 rallycross championship came to a close in Los Angeles. With an immense amount of uncertainty surrounding the future of the sport in North America, all of the teams were in a planning-holding pattern. However, that didn’t slow down the momentum of DirtFish Rally School or DirtFish Motorsports. Even before the announcement of the all-new Americas Rallycross (ARX) series, we were working towards the goal of improving upon everything from the previous year and making everything bigger and better! We acquired two more cars to add to the rallycross program, which also meant adding two more drivers to the team. With so much up in the air, that would be easier said than done until the championship was set.

Once IMG announced ARX, DirtFish jumped on board by announcing the title sponsorship and full support of the ARX race at Circuit of The Americas (COTA) in Austin, TX. Deemed the DirtFish ARX of COTA, all of the organizations involved worked on marketing, promoting and planning the North American debut of a new era of rallycross in the United States. Over the last month, DirtFish Driver, James Rimmer visited Austin multiple times along with his ARX2 race car to create interest at concerts, news and radio stations, and even media days where he was able to give members of local and nation media rides to experience the newly-designed rallycross track at COTA. 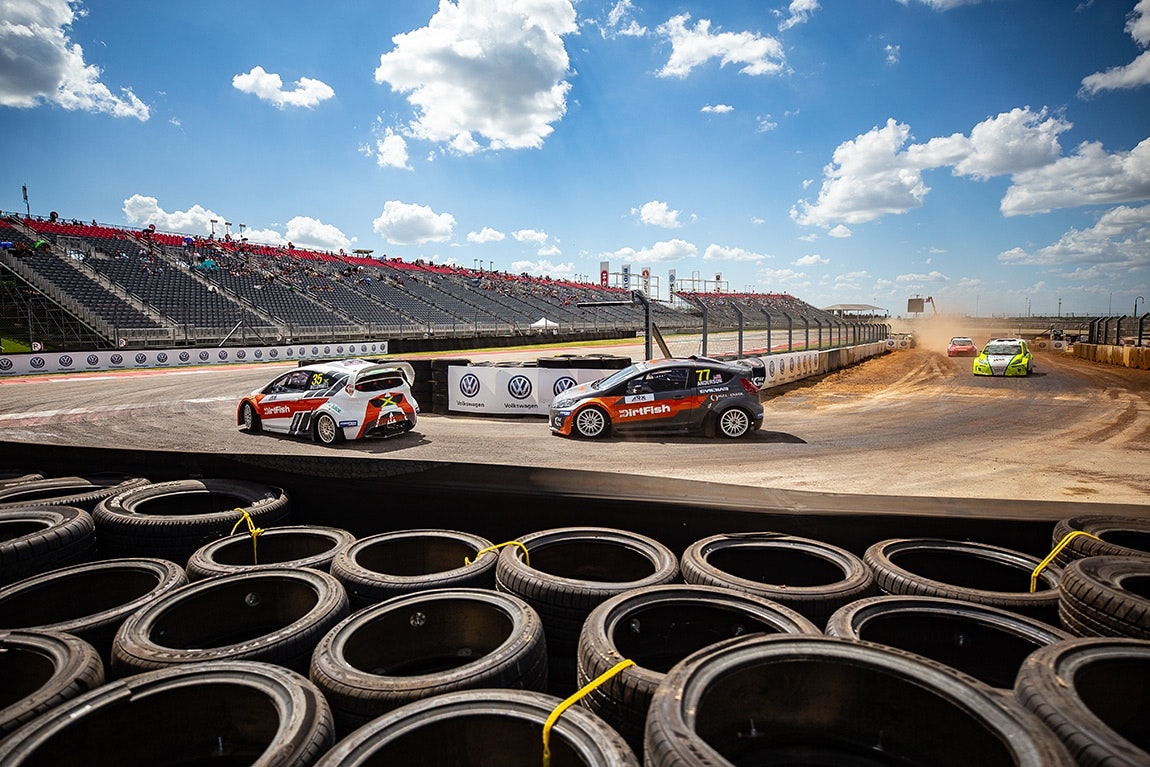 Having four cars meant the DirtFish Motorsports team now needed four drivers, and the crew of mechanics and technicians would have to be substantially larger than the previous seasons, along with trucks, trailers, spares, tools, everything! With the 2017 success of DirtFish Drivers, Conner Martell and James Rimmer, the first two drivers were an easy decision. The team had also been approached by Jamaican Rally Driver, Fraser McConnell, who wanted to step into the sport of rallycross. With his successful background in stage rally and karting, Fraser already had an impressive resume and race craft that would help him be successful in ARX. Rounding out the four-driver team was rallycross veteran, Scott Anderson, who has had success in the sport over the previous two seasons. 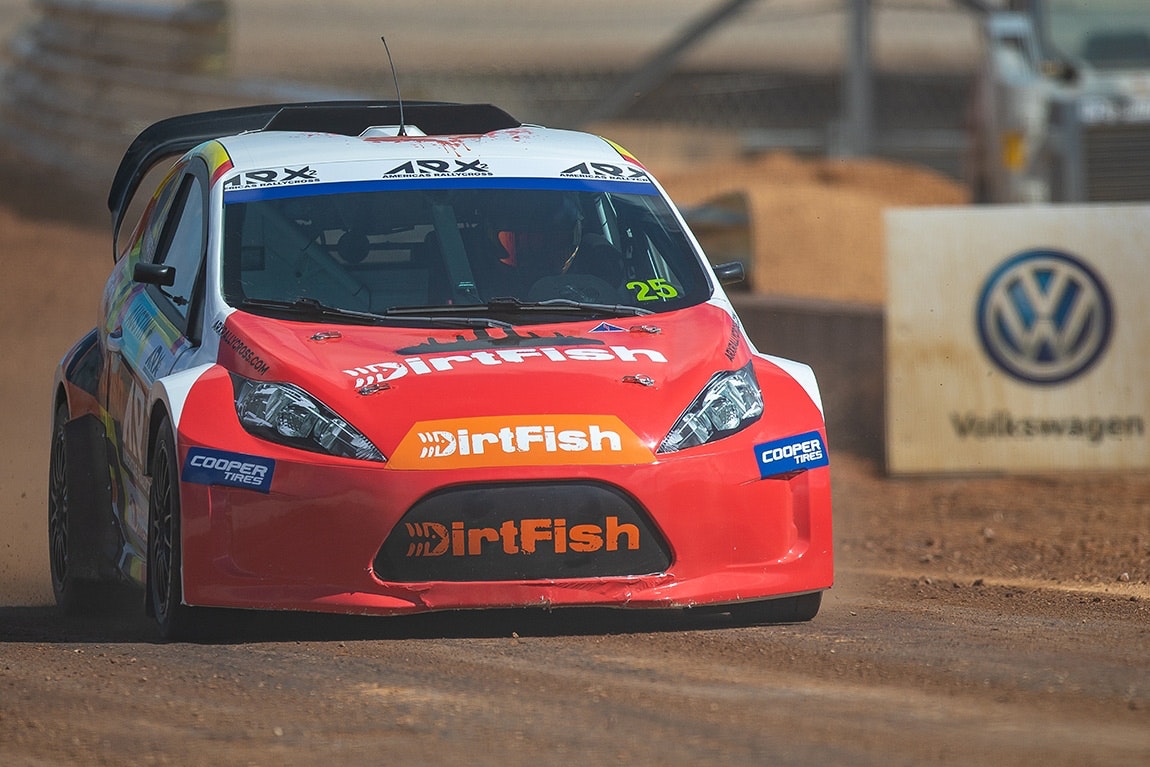 With the cars prepped and drivers chosen, the only thing left to do was to go racing, and after a long break between seasons, everyone was more than ready, chomping at the bit!

If you’ve been to Austin, Texas in July, then you know how hot it can be. When you’re there on vacation, this isn’t much of a problem and can even be rather enjoyable; however, it can have the opposite effect if you are there to race cars. Keeping the cars, drivers, crew and even camera equipment cool was the top priority for everyone throughout the weekend. With the outside temperature hovering around 100 degrees Fahrenheit, the interiors of the cars can reach over 150 degrees, making the driver’s job even more difficult and potentially dangerous as they exert a lot of energy during the races.

Unlike the U.S. rallycross series of previous years, ARX packs all of the racing into one day: practice, four rounds of qualifying, a semi-final and final. Another difference is the format and track layout; the schedule of events throughout the day began with a short practice, followed by a break and then straight into the four rounds of qualifying which determines the starting placement of the semi-finals, and lastly the final, where six cars are going door-to-door at 100% for six laps. There is no Last Chance Qualifier, and the final no longer has ten cars in it, so the drivers must be at the top of their game through every round of qualifying as well as the semifinal for their chance to compete in the final. Another aspect that differentiates the ARX tracks is the Joker Lap – while the old Joker Laps were a shortcut, ARX makes the drivers take the long way around. 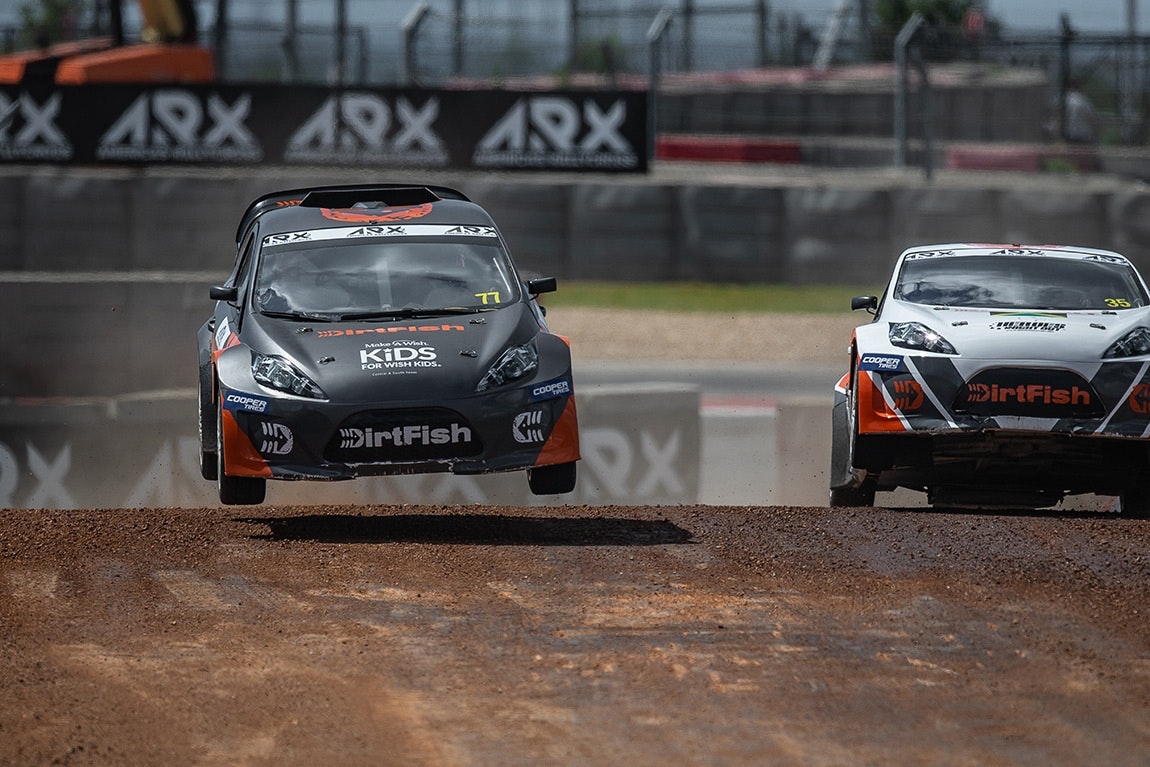 For those of you who may not know, here at DirtFish, we are proud to support charities not only locally, but also in the cities that we race in. This weekend, we were representing three organizations that do great work in the Austin area. Meals on Wheels of Central Texas, whose logo was on the hood of Martell’s car, delivers prepared meals to people who aren’t able to purchase or prepare their own (along with over 16 different programs they offer for support!). Fraser McConnell was representing Heroes Night Out, which is a non-profit organization that provides resources and services to Veterans, Service Members and their families in a safe, family-friendly environment. Last, but certainly not least, Anderson’s car was sporting the logo of Make a Wish Central and South Texas, who make wishes come true for kids who are suffering from life-threatening injuries and illnesses. 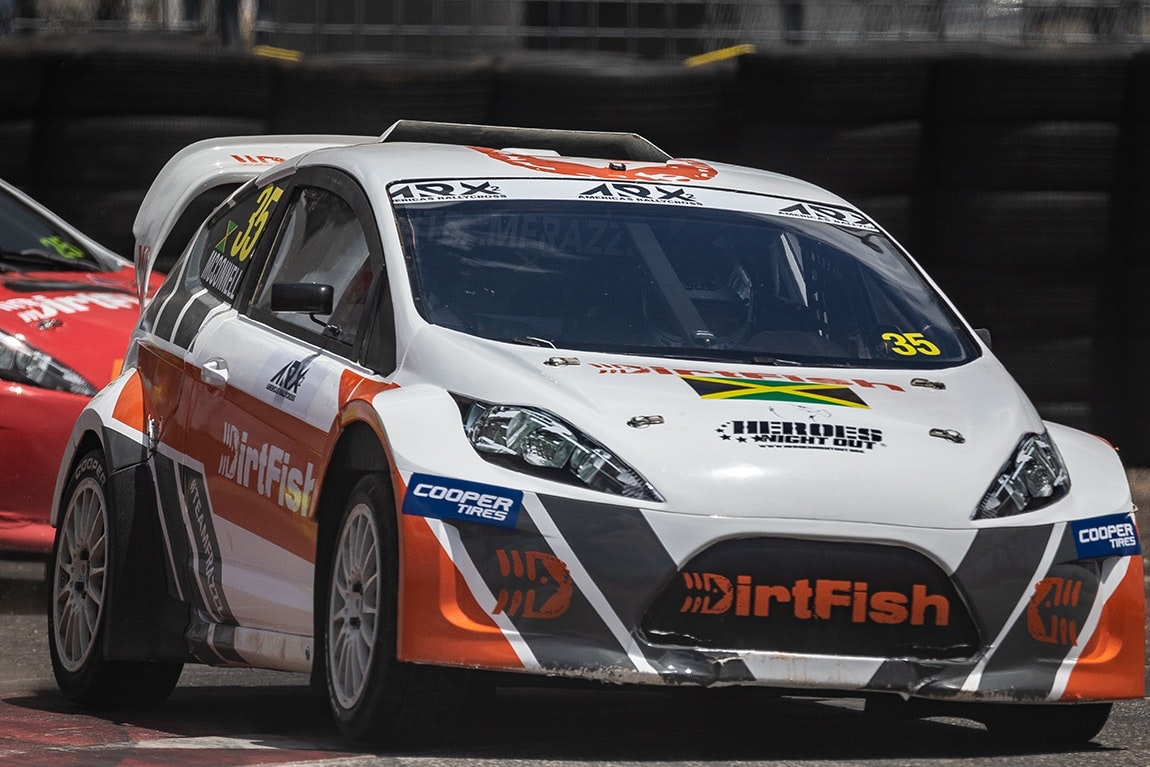 In the weeks leading up to the race, each of the drivers headed over to our headquarters to get reacquainted with the ARX2 cars and do some testing. While they were testing, all four drivers put down some seriously impressive and competitive lap times on the training course. Not only did this give each of the driver’s confidence, but it also showed the Motorsports team that they had a solid group of drivers who could all contend for the top spot on the podium and even possibly provide DirtFish with a 1-2-3 podium sweep! 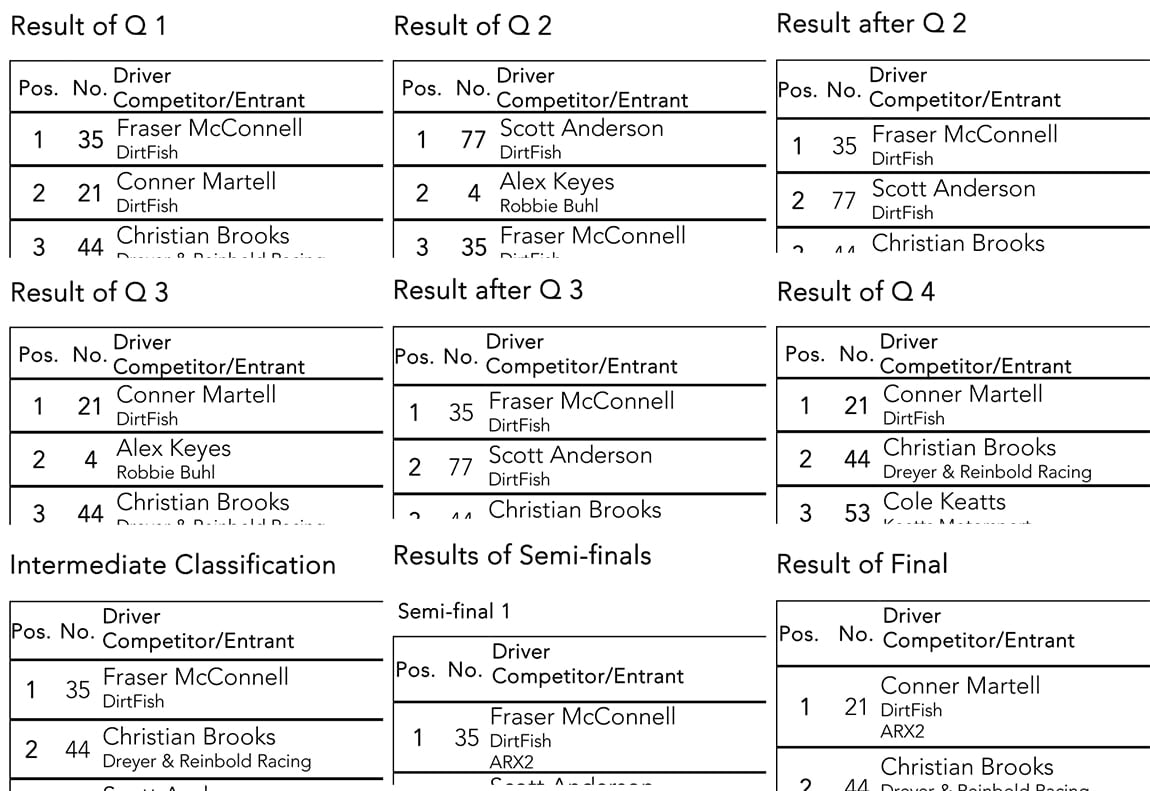 When race day came around, the DirtFish drivers and service crew certainly did not disappoint! When you look back at the official results, every page has a DirtFish driver sitting in the top position. Fraser McConnell, Conner Martell and Scott Anderson each landed a P1 result in at least one of the rounds of qualifying. One of those three names truly stands out- the rallycross newcomer, McConnell not only achieved a P1 in one round, but by the end of qualifying he was sitting in the top position overall! Everyone on the team was extremely impressed. Since Martell has been known to sweep entire days of racing, it was no surprise that he won two rounds of qualifying. Following all four rounds of qualifying, McConnell and Martell went on to win their respective (and exciting) semifinal races, positioning themselves in P1 and P2 with Anderson behind them in P3 at the start of the final. Unfortunately, Rimmer didn’t have quite the same luck of the other three. On the final lap, he had some contact with another driver that sent him into a tire stack, ultimately ending his day in 4th place. The Final began with Martell achieving a perfect start, allowing him to slip into the lead ahead of McConnell and Anderson. All three of the DirtFish drivers decided not to take the joker lap and leave it for later in the race, resulting in a good lead over the other three drivers. Martell was able to get far enough ahead for a clear drive, allowing him to pull away for the entire race and finish 6.6 seconds ahead of the rest of the field. McConnell and Anderson took the joker on the second-to-last lap where the three other drivers were able to catch up. Both DirtFish drivers put up a good fight, but in the end, McConnell was pushed back to 4th place and Anderson was pushed into the wall by one of the other competitors. 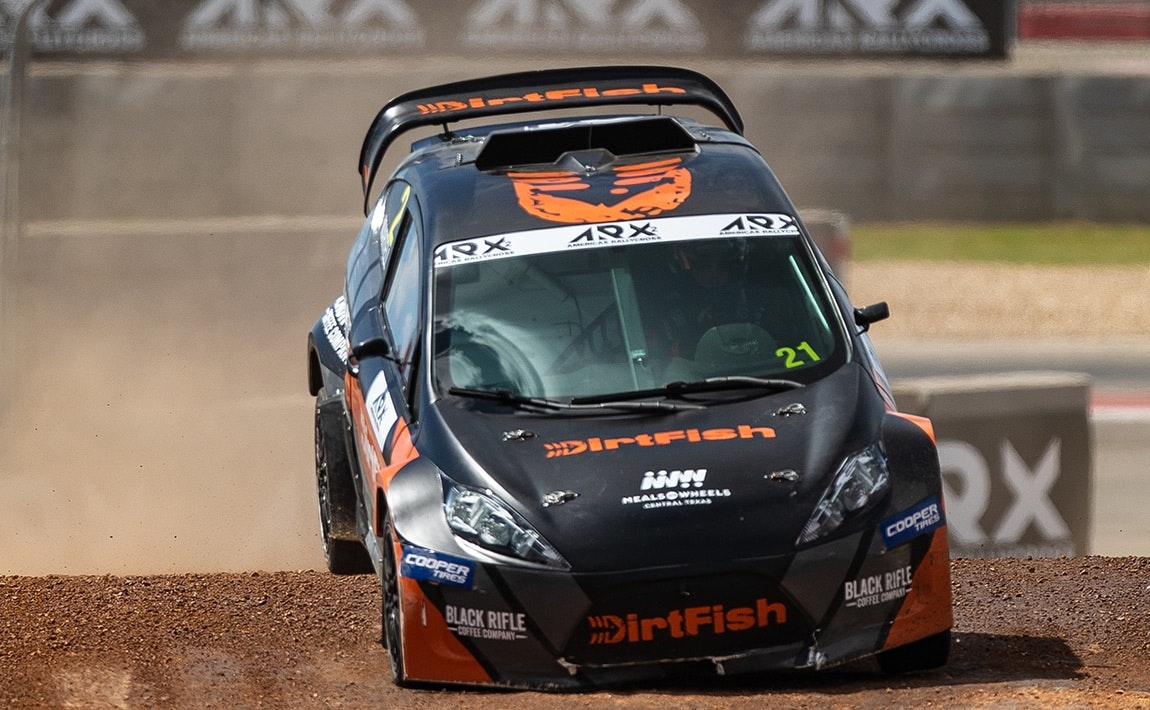 Thanks to the P1 finishes throughout the day, Martell and McConnell are currently tied for the lead in the championship points, and Anderson is sitting just behind in 4th place. The results of this first race bode extremely well for the DirtFish Motorsports team and drivers heading into the next two races.

The next round of ARX Rallycross will be across the border at Grand Prix Trois-Rivières on August 4th and 5th. You can purchase tickets for that race and the final round at COTA from the link below: