“We’re very happy with the results Vermont SportsCar and our team drivers delivered Subaru this weekend” stated Subaru motorsports marketing manager Rob Weir. “Rally and rallycross are tough on teams and drivers, so it was really great to see Subaru Rally Team USA take a one-two finish at STPR and be back on the Red Bull GRC podium at the same time.” 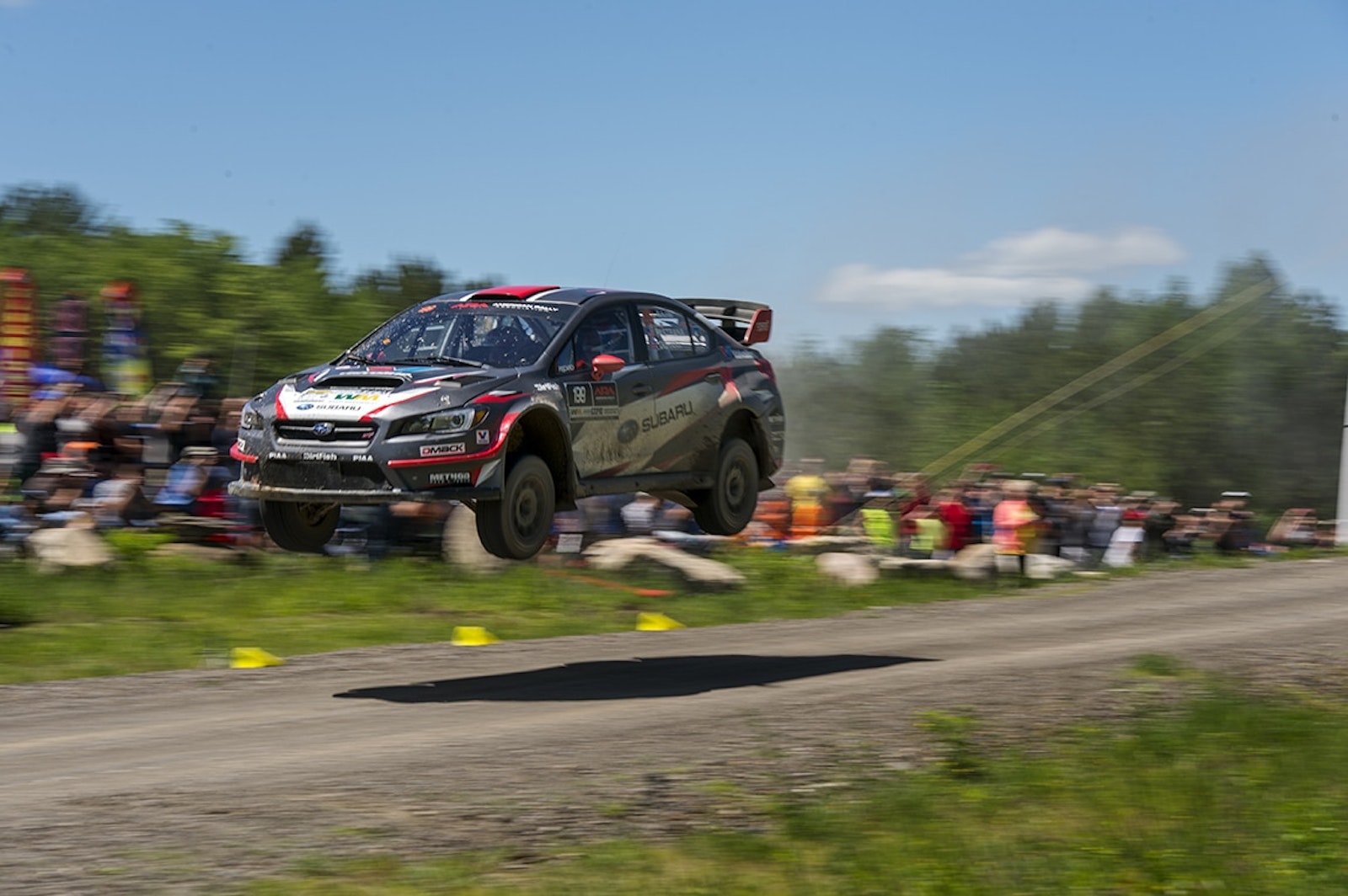 The Susquehannock Trail Performance Rally (STPR), based around Wellsboro, Pennsylvania, kicked off first on Friday for the team, with Travis Pastrana and co-driver Robbie Durant battling teammates David Higgins and co-driver Craig Drew.  STPR began with Pastrana jumping out to a big lead as Higgins was slowed on the first two stages with a mechanical problem.  The rally resumed on Saturday with Higgins, behind by over one minute to Pastrana, mounting a determined charge to reel Pastrana back in.  Higgins went on full attack, winning eight of nine stages on Saturday to close the gap to Pastrana.  Although Pastrana defended his lead for most of the day his hopes of keeping Higgins at bay were dashed on the penultimate forest stage where a small mistake caused him go off the road causing a tire puncture and slowing him nearly three minutes, handing the lead and eventual victory to Higgins. 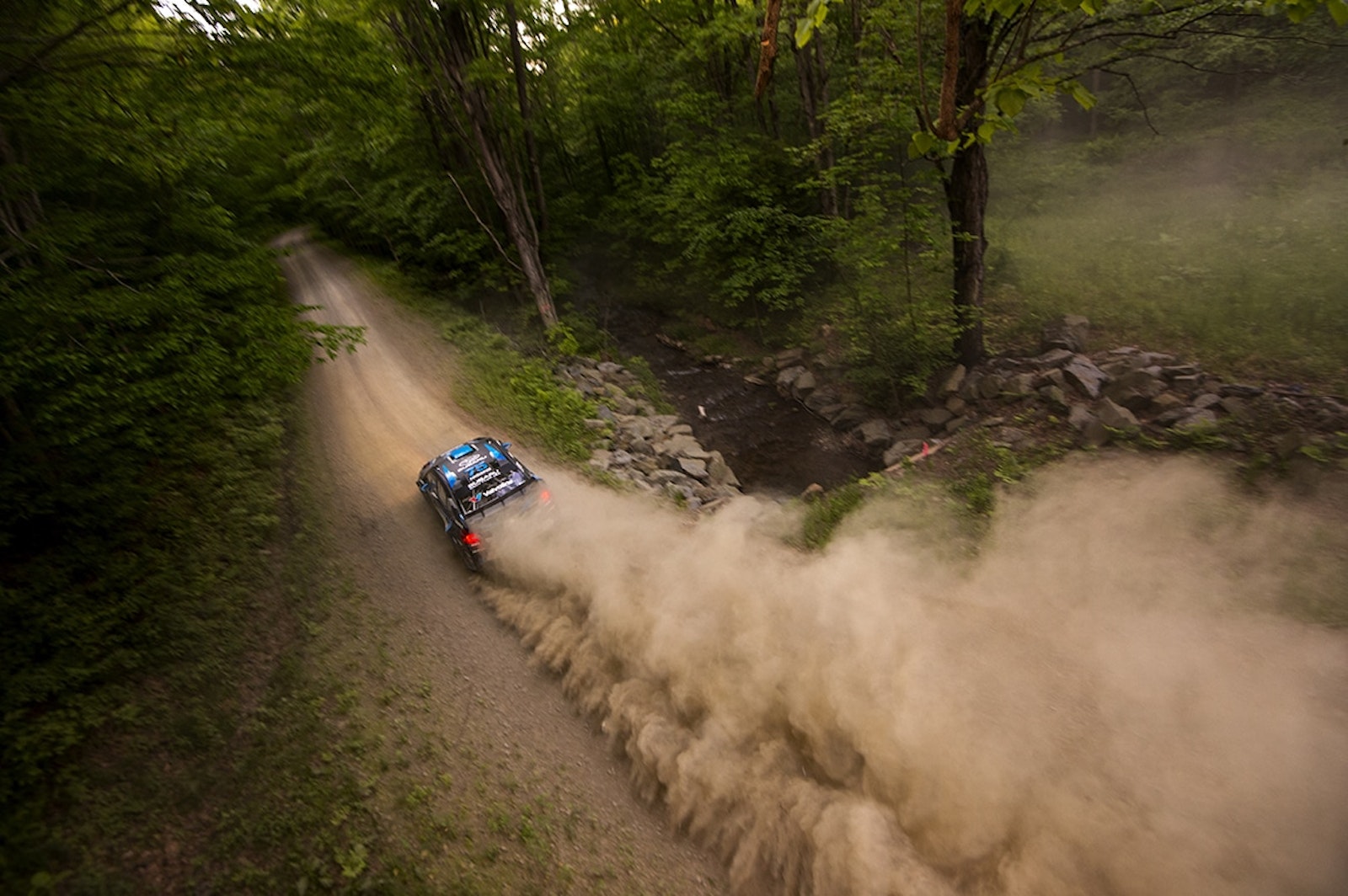 “It was a good hard combat win,” said Higgins at the podium. “We knew Travis was going to have to go 100%, and we knew that at the limit it’s always possible a driver can make a mistake and get a (tire) puncture. We had to keep maximum pressure on them all the time. We’re just happy to be here on the top of the podium again.”

The win was Higgins’ seventh career win at STPR and his third victory of the 2017 American Rally Association Championship (ARA), extending his championship points lead over Pastrana.  This was the fourth straight 1-2 finish for Subaru Rally Team USA in the ARA Championship.

While Higgins and Pastrana battled in the forests of Pennsylvania, the Red Bull Global Rallycross Championship heated up at Thompson Speedway in Connecticut with Subaru team drivers Patrik Sandell and Chris Atkinson at the wheel.  Thompson Speedway Motorsports Park is the first venue in Red Bull GRC history to feature elements of both an oval and permanent road course in its track design. The .895-mile course featured the longest dirt section of the season as well.

After earning a 6th and 7th place finish in the first race of the double-header weekend on Saturday, the Subaru duo of Atkinson and Sandell bounced back on Sunday.  Chris Atkinson, still considered a rookie in GRC with this just seven races completed to date, drove his 600hp #55 Subaru WRX STI Supercar to a 2nd place finish in his Semi-Final and then charged his way to  a 3rd overall finish in the Final. It was the Australian’s first Red Bull GRC podium.  Sandell meanwhile battled through the field to earn 5th overall in the final, a solid result for the Swede in his first year with Subaru.

“I’m so pumped! It’s my first podium and it feels good to do it for the team, they’ve worked so hard. It’s just a really nice thing to get the ball rolling and go from here,” said Atkinson from the podium celebration. “We got the result we were after, putting both cars in the top five plus a podium, the team is full of confidence now moving forward.”

The 2017 Red Bull Global Rallycross season resumes in two weeks with the series’ inaugural visit to Ottawa and a doubleheader round at the Canada Aviation and Space Museum. Tickets remain on sale for the event at redbullglobalrallycross.com/tickets. Supercar finals from Ottawa will air live on NBC on Sunday, June 18 at 4PM ET.

About Subaru of America, Inc.
Subaru of America, Inc. is a wholly owned subsidiary of Subaru Corporation of Japan. Headquartered at a zero-landfill office in Cherry Hill, N.J., the company markets and distributes Subaru vehicles, parts and accessories through a network of more than 620 retailers across the United States. All Subaru products are manufactured in zero-landfill production plants and Subaru of Indiana Automotive, Inc. is the only U.S. automobile production plant to be designated a backyard wildlife habitat by the National Wildlife Federation. For additional information visitmedia.subaru.com. Follow us on Facebook, Twitter, and Instagram.