Nurburg, Germany  –  Subaru of America, Inc. announced today that the Subaru WRX STI Type RA NBR Special set a new lap record for a four-door sedan at the famous 12.8-mile Nürburgring Nordschleife race track, achieving a time of 6:57.5. A video will be released shortly. The time was achieved using the Nurburgring timing equipment and was officially verified by track officials.

The WRX STI Type RA NBR Special was designed to show the capabilities of the Subaru sedan and all-wheel drive. This time attack car has set lap records at the Isle of Man TT, the Goodwood Festival of Speed hill climb (where it was also 3rd fastest overall) and now it has conquered the 12.8-mile (20.6-kilometer) lap around the Nurburgring Nordschleife in less than seven minutes. Achieving a time of six minutes and 57.5 seconds, the Prodrive-built time attack car is equipped with a rally spec 2.0-liter Boxer engine and Subaru Symmetrical All-Wheel Drive.

The WRX STI Type RA NBR Special is a custom built race car built by Prodrive using a stock 2017 WRX STI with a full roll cage welded into the standard WRX STI unibody for added strength and stiffness. It has a modified 2.0-liter Subaru WRC-spec boxer motor. It uses a 75-mm intake, and the turbo runs at 25 psi of boost. This produces more than 600 horsepower at 8,500 rpm. Prodrive calculated the top speed at the ’Ring would be 179 mph at 8,500 rpm in top gear. The car has 9-inch-wide slick tires all around. It uses a WRC gearbox with an automatic clutch, modified with hydraulics for paddle-shift operation. Shift times are some of the fastest at 20 to 25 milliseconds. A redesigned aero-package, different than last year’s TT car set up, delivers improved handling and top speed on the NBR Special. At top speed the whole package produces about 650 pounds of downforce. The design includes a Drag Reduction System rear wing similar to the technology found in Formula 1 cars. With its combined electric and hydraulic operation, the wing can deploy for full downforce/drag under braking or in fast turns and then open for less downforce/drag on long straights. The driver has full control of the DRS via a steering wheel mounted control taking less than 20 milliseconds to change position fully. 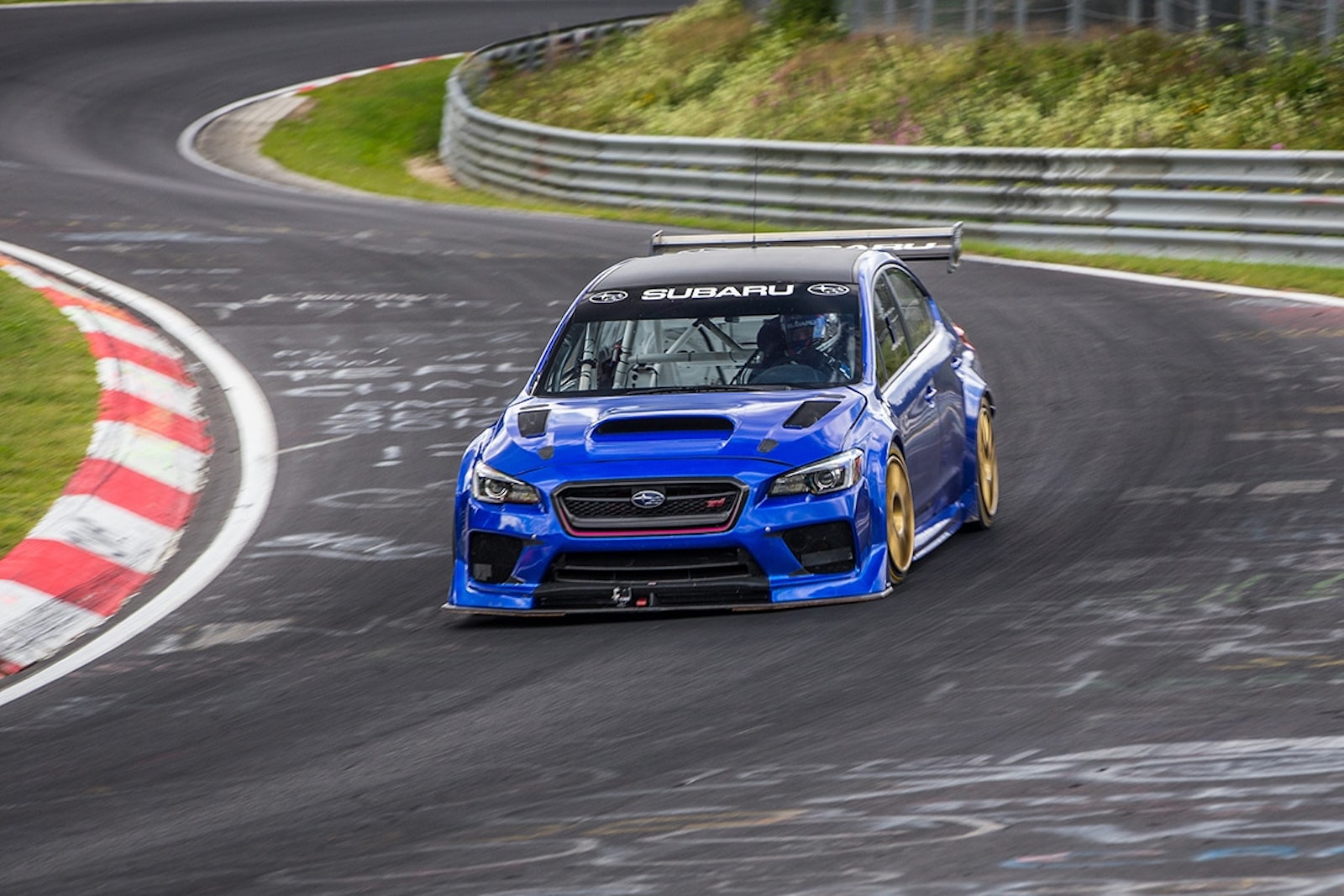 WRX STI Type RA
The RA designation stands for “Record Attempt” and has been applied to various Subaru performance models. The original venture took place in 1989 when a competition version Subaru Legacy broke the FIA World Speed Endurance Record by clocking over 62,000 miles in 18 days and set a top speed record of 138 mph.

Handling has been upgraded with inverted front struts and rear double wishbone suspension all with Bilstein® dampers. A modified multi-mode VDC gives the car better stability control to keep it on its intended path. The Brembo® brake system, with monoblock 6-piston front calipers and dual-piston rear calipers, features an exclusive silver finish and is paired with cross-drilled rotors for better heat dissipation.

In addition to the eye-catching exterior, the WRX STI Type RA cabin features Recaro® performance design front seats with red bolsters and stitching as well as an embossed STI logo on the head restraints. The signature red stitching and accent trim is visible throughout the cabin. The steering wheel is wrapped in Ultrasuede® for better grip and has a black gloss-finish center spoke insert with STI logo. Push-button start with Keyless Access is also standard equipment. Each of the 500 WRX STI Type RA produced for retail sale has been individually numbered with a plaque mounted on the center console.

About Subaru of America, Inc.
Subaru of America, Inc. (SOA) is a wholly owned subsidiary of Subaru Corporation of Japan. Headquartered at a zero-landfill office in Cherry Hill, N.J., the company markets and distributes Subaru vehicles, parts and accessories through a network of more than 620 retailers across the United States. All Subaru products are manufactured in zero-landfill production plants and Subaru of Indiana Automotive, Inc. is the only U.S. automobile production plant to be designated a backyard wildlife habitat by the National Wildlife Federation. SOA is guided by the Subaru Love Promise, which is the company’s vision to show love and respect to everyone, and to support its communities and customers nationwide. Over the past 20 years, SOA has donated more than $120 million to causes the Subaru family cares about, and its employees have logged more than 40,000 volunteer hours. As a company, Subaru believes it is important to do its part in making a positive impact in the world because it is the right thing to do.