This round of the FIA F4 US Championship at Circuit of The Americas with FIA WEC was the best F4 race weekend I have ever had! Throughout the weekend, I was consistently at the top of the time sheets and in the process, I captured Pole Position for Qualifying, Wins in both Race 1 and 2, and a 3rdplace finish in Race 3 out of the 33 car field! In addition to this, I claimed the fastest lap time of the entire weekend within the F4 field and that is a huge confidence booster going into the next round which will again be at Circuit of The Americas. To top this off, the next round at COTA will act as a support race to Formula 1 and I feel confident that we can produce the same results going forward for this round. I would like to say a BIG thank you to everyone who has helped and supported me and of course Global Racing Group for providing me with a world-class team and car. I will be working hard with my fitness program, simulator testing, and data/video review for this next race weekend and I cant wait to get back out on track! 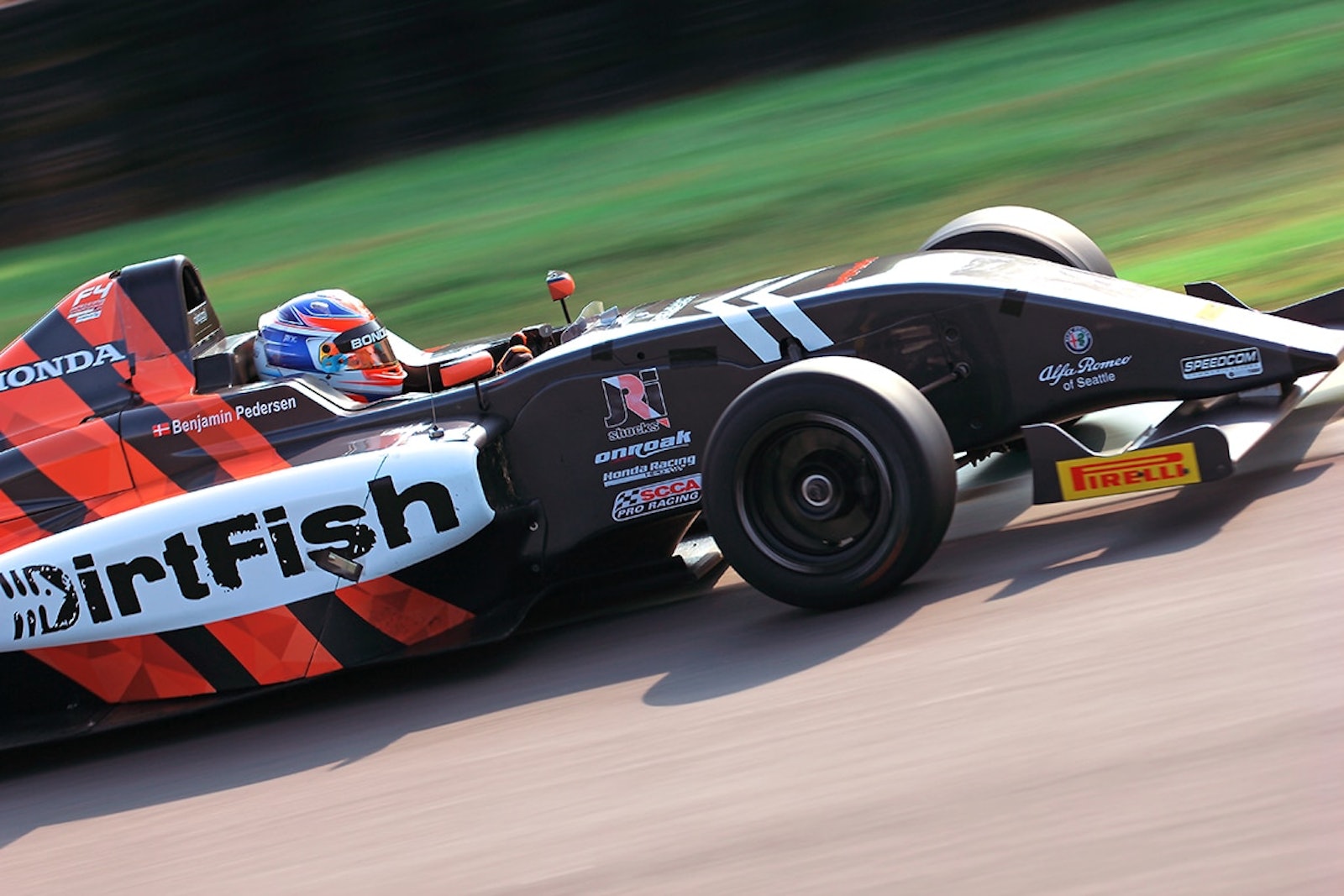 Qualifying results put me in Pole Position (1st) for the start of race 1. As the session got underway, I got quickly up to race pace and was within the top 5 of the time sheets. I traded times with the other top 5 competitors shuffling the order up and down but then with 10 minutes to go, I put down a lap time putting me in Pole Position by 0.02 of a second! This shows just how tight the field is and the level of competition within the field. In addition to this, a red flag was issued just after I got pole position which helped me retain my position. At that point, there was only 3 minutes left in the session and as the session went green again, I was able to stay at the top of the time sheets, giving me a great opportunity for a win in race 1 and some good championship points! During this qualifying session, I was also able to set the fastest lap time within the weekend for F4 which was another huge positive to take away from the session.

Starting from Pole Position (1st) based on qualifying results, the goal for this race was simply to get the win and check out from the field of cars behind. As the lights went out for the start, I had a great launch up towards turn 1 –staying clear of any first corner drama. Then on the back straight, I was drafted by second place driver, Dakota Dickerson, in which he took P1 and I fell back to P2. Determined to pass him back, I kept my head cool and knew that I would have the advantage on the next lap to draft and regain the top spot. Sure enough, I got a great draft on the next lap and got my P1 position back. After doing this, I was able to check out from the rest of the field, laying down good qualifying lap times for the next race and keeping my head cool, staying clear of any mistakes. Within the race, I captured the fastest lap time within the field by 0.7 of a second which was truly ideal so that I would be starting from Pole Position again for Race 2. By the end of the race, I got my first ever F4 race win –A huge goal I have had since day 1 of the series! To make it even better, I knew that I would be starting from Pole again for Race 2. Words cannot describe the feelings I had when I crossed the finish line and got my first win! This was also the first win for Global Racing Group, a massive accomplishment for everyone! 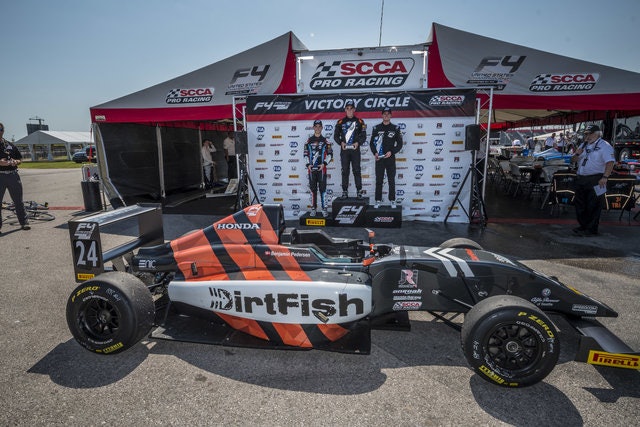 Starting in Pole Position (1st) based on the best race 1 lap time, I knew that I had to approach the race in the same way as race 1 as I would be starting from the same position. After going through data/video review of race 1, I also learned some new techniques in order to get a better first lap eliminating anyone from passing me in the draft, further allowing me to check out from the chasing field behind. Happily, this data/video review played a big deal for Race 2! I was able to stay in front from when the lights went out to when the checkered came out –Claiming my second F4 race win! Again, I was happier than words can explain and it was a great way to end the day. Knowing that we had been P1 in all 3 sessions of the day was again a huge confidence booster going into the next day, but also very reflective of all the hard work the team and I have put into the season.

Starting from 4thposition based on the best race 2 lap time, I had one goal for this race and that was to drive my way up to P1. As the lights went out, I knew that I would have an advantage over the driver in P3 as he was on the “dirty” side of the track, allowing me to get more traction off of the line. For the run up to turn 1, I was able to get the run on the P3 driver and out brake him going into the turn, putting me in P3 for the rest of the first lap. I was making good progress on P1 driver Dakota Dickerson and P2 driver Kyle Kirkwood, and managed to close the gap up to Kirkwood. At this point, I was putting lots of pressure on Kirkwood, but we were also closing the gap up to Dickerson at the same time. All 3 of us continued battling throughout the entire race, exchanging positions lap per lap, all while staying clean and respecting each other. To be honest, it was some of the most fun I have had in a race and it’s scenarios like this where I can work on my race craft. I was able to finish the race P3, getting the last spot on the podium but I understand that the race win could have gone to anyone due to the tight racing. Overall, it was a great way to end the dominating weekend and I couldn’t be happier!