The opening round of the 2018 FIA F4 US Championship at Virginia International Raceway has brought a great start to the season for Benjamin Pedersen and Global Racing group! For the F4 teams, the race weekend was shared with Pirelli World Challenge, which brought out a large number of spectators and strong exposure for Benjamin and the team! Throughout the weekend, Benjamin secured Pole Position during qualifying, one race-win in race 1 and two top-five finishes in races 2 and 3. “Our pace and car setup are both very promising after our hard work during the pre-season,” says Benjamin and continues, “I couldn’t be more thankful to be working with Global Racing Group for both the 2018 FIA F4 US Championship, but also my recently announced 2018 FIA F3 Americas campaign! Thank you to everyone involved, I couldn’t be happier now that the 2018 season has officially started!”

Qualifying – Saturday, April 28, 2018
The Qualifying results put Benjamin in 1st position (Pole) for the start of race 1 – which set him up for success during the first race! As the early morning session got underway, conditions quickly showed that it wasn’t going to be an easy session. The track was cold and damp from the morning fog, which meant the grip was lacking by a large amount compared to the previous practice and qualifying sessions. As the track began to dry out and heat up, the lap times became quicker and quicker, so every lap was all about finding the limits of the car. To make it even more difficult, the session brought out multiple CODE 40 flags, a new “Virtual Safety Car” introduced to F4 competition, which requires all competitors to slow down to 40 MPH on track. The slower speed resulted in the tires cooling down well below ideal operating temperatures. This made it very tricky to maintain tire temperature within the session and therefore, an overall lack of grip. Despite all of these circumstances, Benjamin still managed to finish in the top position! Benjamin said, “I’m certain that my cross-training out at DirtFish Rally School helped me during this session. The overall lack of grip on the track shows just how important cross-training on a loose surface is to all forms of motorsport!”

Race 1 – Saturday, April 28, 2018
Starting from 1st position (Pole) based on qualifying results, Benjamin knew a race win and several championship points would be possible. As the lights went out, he was able to get a clean start off of the line and maintain the first position all the way down to turn 1. Heading on to the back straight, second place driver Christian Rasmussen made a pass on him utilizing the draft, and allowing Benjamin to tuck right in behind him. For the next couple of laps, he maintained his gap to Christian who was sitting P1. The two drivers began increasing their lead ahead of the rest of the field, minimizing the risk of being passed by the P3 and P4 drivers. On the final lap, Benjamin was drafting behind Rasmussen heading onto the back straight, allowing him to make the pass and take the lead back before crossing the finish in first place! It couldn’t have been a much better start to the season in for Benjamin and the entire Global Racing Group! 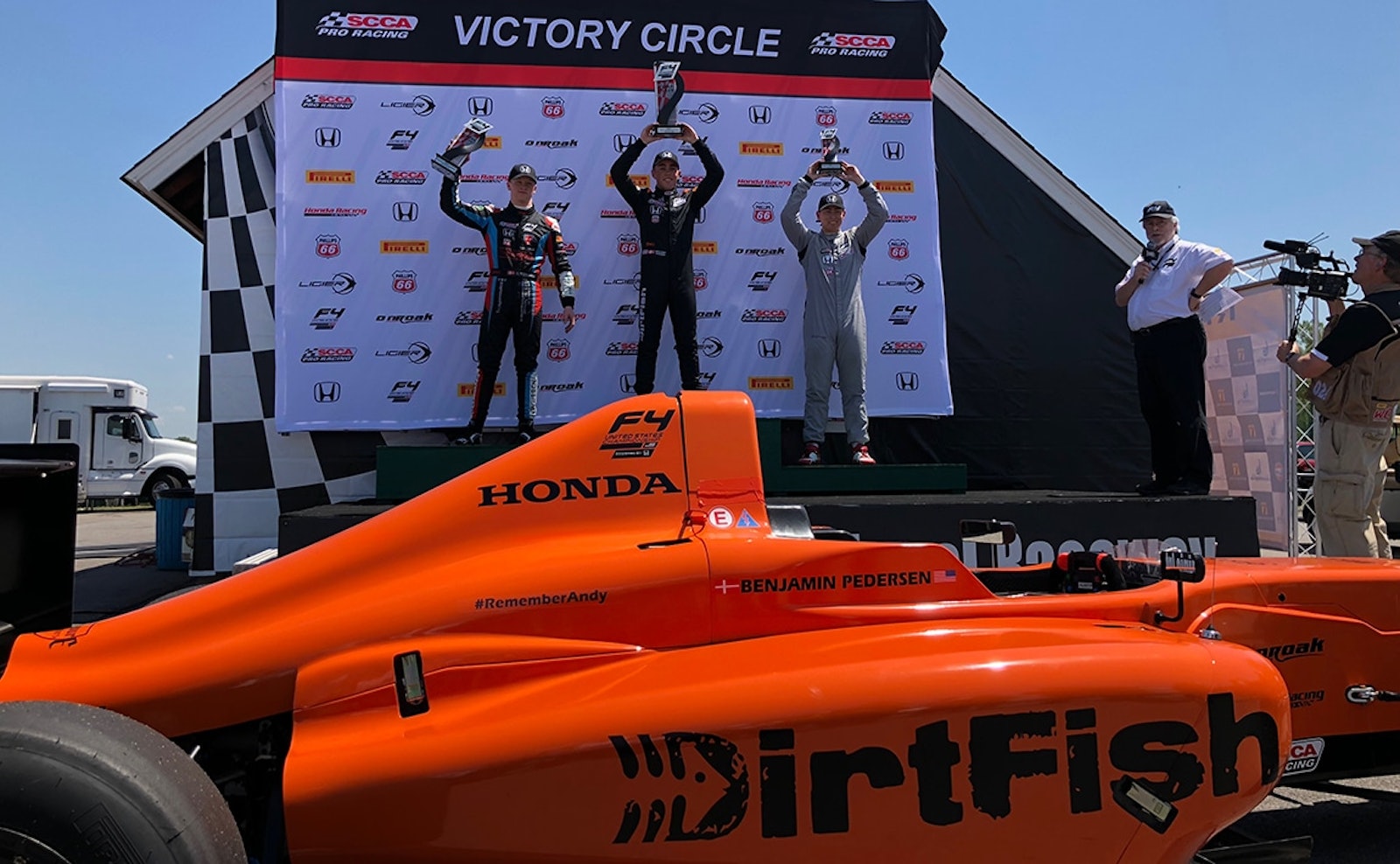 Race 2 – Sunday, April 29, 2018
Starting from the 3rd position based on the fastest lap time in race 1, Benjamin knew that he would be in a strong position to make some passes utilizing the draft! As the lights went out, Benjamin came off the clutch slightly too fast resulting wheel spin, immediately pushing him back a position. Roughly half-way through the race, he was able to use the draft to pass the driver in P3 and move up a position. Unfortunately, on the following lap, he used the same maneuver on Benjamin pushing him back to P4. As the race continued, he maintained P4 hoping for a mistake from the driver in P3 for the remainder of the race. Gutted that he wasn’t able to make it on the podium, a P4 finish still equated to a great number of championship points. “Going into this race, the team and I knew that it would be challenging,” said Benjamin. He continued, “many of the front runners were using new tires, and I was on used tires, a strategy that would make the Race 1 and Race 3 tire choice play in our favor.” 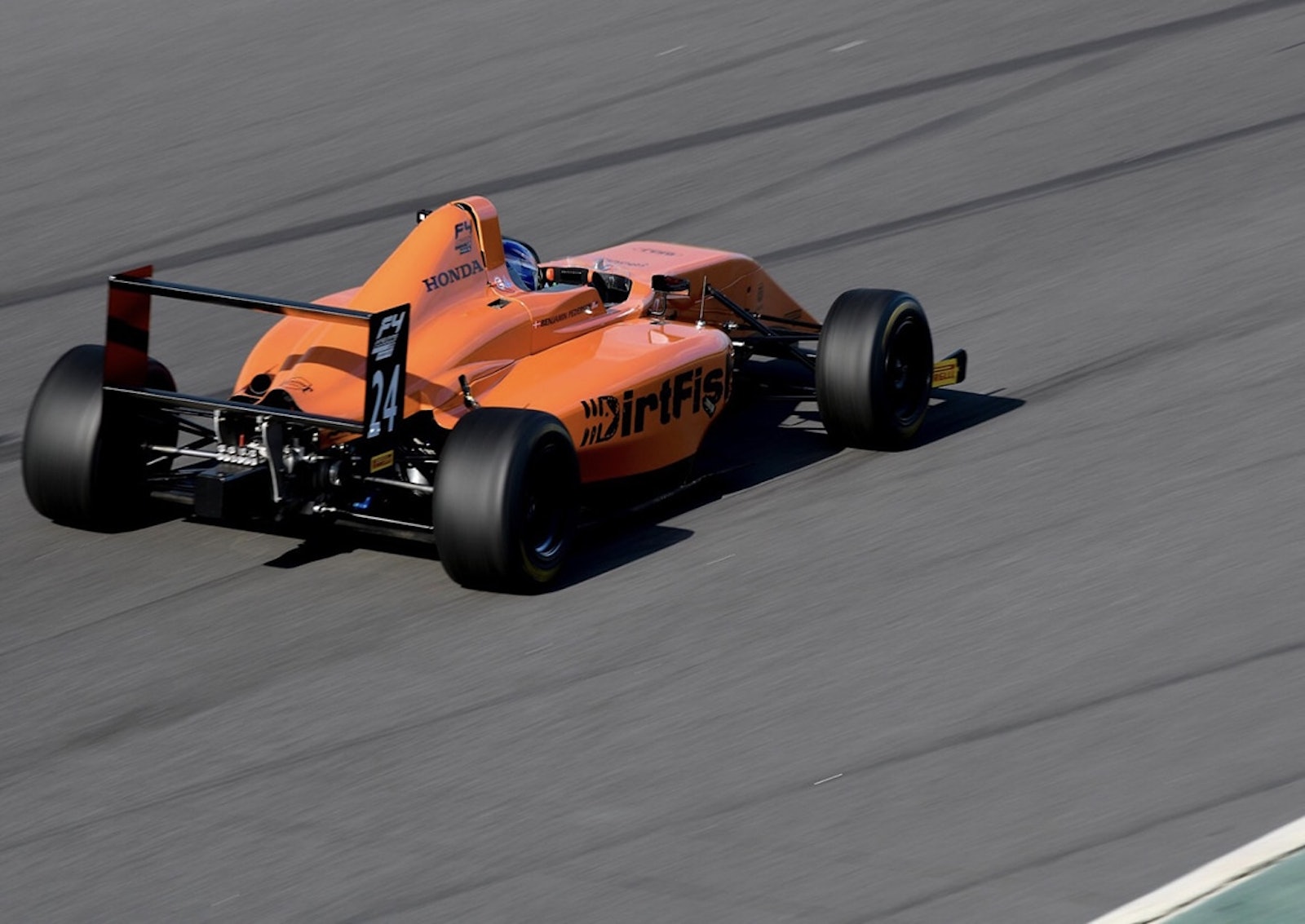 Race 3 – Sunday, April 29, 2018
During the second race on Sunday, Benjamin started from the 7th position based on the fastest two-lap race time from the prior day. Benjamin knew he had his work cut out for him to get back onto the podium. Before the race, the team made a few setup changes to the car, which was a step in the right direction! As the lights went out, he had a great start and immediately made up two positions moving up to P5 by the end of the first lap. The pace was very promising, and Benjamin was on a mission to get back onto the podium. During one of the laps, all of the lead cars were racing each other hard going into turn 1; he went on the inside making an amazing pass and moving up to P2 with sights on the P1 driver! As the laps dwindled down, Benjamin was solidly sitting in P2 until he had a technical issue with his gearbox. During the downshifts, the engine would blip the throttle, but it wouldn’t change gears. As a result, the car would accelerate during braking due to the throttle blips which was a very uncomfortable feeling when he was braking at the absolute latest possible point. This caught him off guard going into the famous Oak Tree corner, sending him off the track into the grass. Fortunately, he was able to avoid hitting anything. With grass blocking the radiator, he needed to manage my engine temperatures for the rest of the race by short shifting and not being on full throttle. Because of this, he fell back to P5 as the race came to an end.

Although he didn’t finish on the podium after it was looking so promising, Benjamin said that he is, “still happy that we finished the race in P5 which again is important championship points out of the 33 car field! After the race, the team analyzed what the problem was, and we now have it fixed so our next outing will be very strong!” Benjamin and Global Racing Group have their next race at Road Atlanta on May 10th through the 12th. We look forward to watching Benjamin progress throughout the season!