The round of the FIA F4 US Championship at Circuit of The Americas with Formula 1 was a weekend Benjamin will never forget! The weekend brought out roughly 300-400K spectators, which was amazing from a drivers perspective but equally just as important was all of the team sponsors and the exposure involved. Throughout the weekend, the drivers were challenged with difficult weather conditions. With the help of Global Racing Group, they were able to produce some great results throughout the weekend, enabling them to capture 4th place in the Drivers Championship and 2nd place in the Team Championship. By placing 4th in the Drivers Championship, Benjamin was able to receive FIA Super License Points. This will help him achieve his ultimate goal of Formula 1, in which you need a minimum amount of Super License Points to compete in the championship.While reflecting on the results, he achieved a front row start based on qualifying lap times, a race WIN in Race 1, and a 10th place finish in Race 2, following a battle with difficult weather conditions (securing the last championship point available). Benjamin is extremely happy with the season and with where he was able to finish in the championship even though of course, he would like to be in the very top spot. He will be ready to fight again during the following season and will be training hard in the off-season to help achieve that goal. Benjamin says, “Thank you to everyone who has supported me this year and I greatly appreciate all of your help! Bring on 2018!”

Qualifying results placed Benjamin in the 2nd position for the start of race 1 – a great opportunity for success in the first race! As the session got underway, he quickly found his way to the top of the leaderboard, exchanging lap times with the other front-runners of the series. About halfway through the session, he fell back to P5, understanding that he would need to find a couple of tenths to make it back to the top spot. Sure enough, Benjamin managed to do just that on the following lap and he was sitting on Pole with only a minute to go in qualifying. Just as he thought he had taken the pole position, Kyle Kirkwood snatched the top spot by 0.004 of a second – a gap so small he didn’t think it was possible. Slightly disappointed with losing Pole position by such a small margin, Benjamin knew he would be in the prime position for the race as he could take advantage of having a good start on the clean side of the track and drafting.

Starting from the 2nd position based on qualifying results, Benjamin knew a race win and many championship points would be possible. As the lights went out, he equaled the pace of Kyle Kirkwood (Pole Sitter) off of the starting line and had the outside line going into turn 1. Kyle managed to stay in front, however, and Benjamin tucked in right behind him, utilizing the draft for the rest of the lap. He then went to plan “B” which involved making a gap to the competitors behind him while still closing the gap to Kyle, further allowing Benjamin to choose when to attack for the top spot without much risk of getting passed by the people behind him in the process. About halfway through the race, he was drafting Kyle on the back straight and passed him on the outside going into turn 12. From this point on, Benjamin was able to keep Kyle and the rest of the competitors behind him and opened up the gap allowing him to run his own race all the way to the finish. Within this process, he was also able to lay down a fast lap time, giving him the Pole Position for the start of race two by 0.5 of a second, which was another huge positive from the race! Benjamin mentioned, “I will never forget the parade lap after our race win in front of all the F1 fans –it was such a cool experience!” 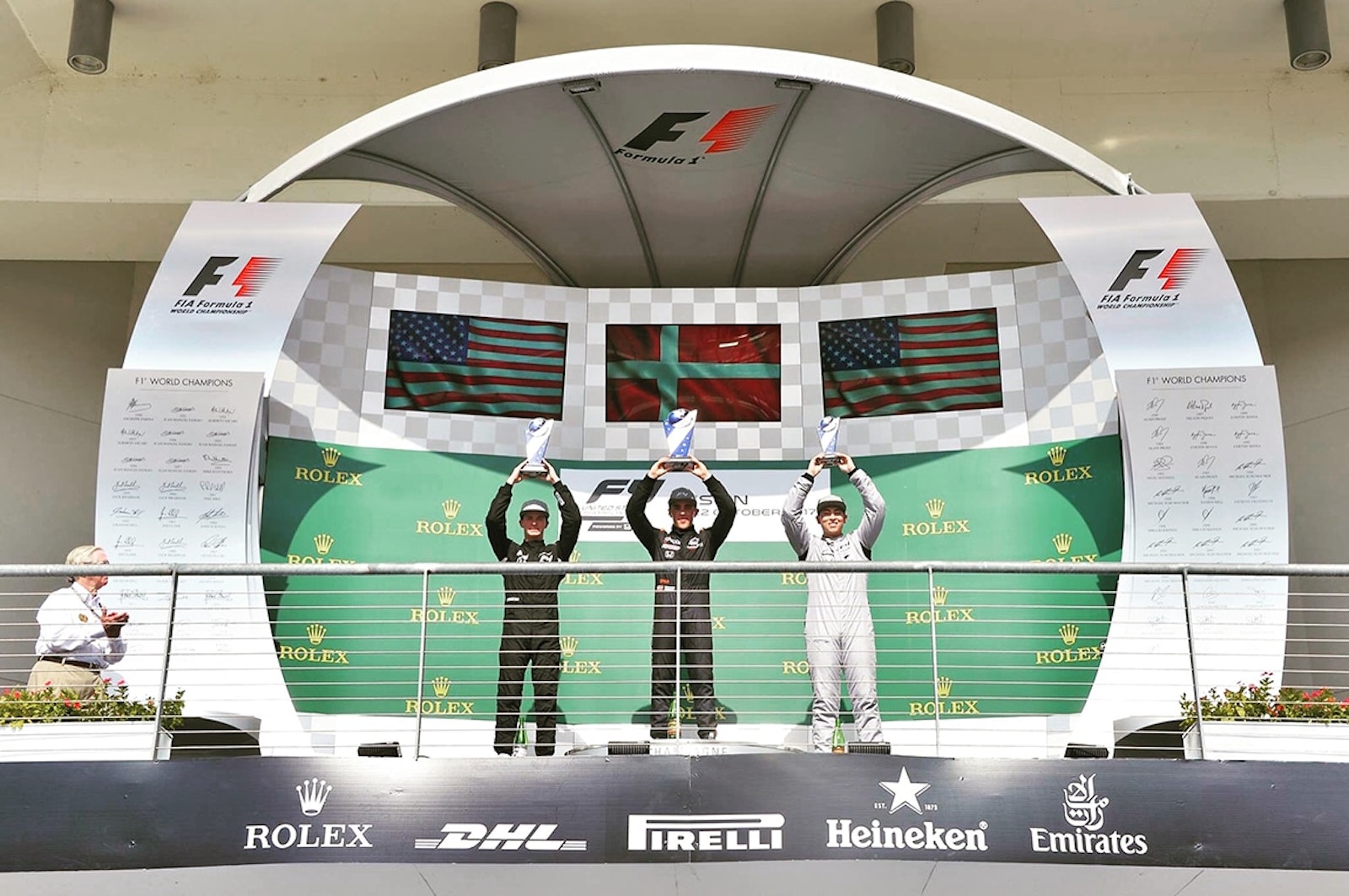 The following day, Benjamin knew that he needed to approach the race in the same way as race 1, managing the gaps behind him and running his own race. Unfortunately, track conditions showed wet and damp areas, resulting in a mandatory wet weather tire start. As a team, they also gambled on putting an aggressive wet weather set-up on the car, hoping it would help with both wet conditions for the start but also tire degradation as the track would eventually dry up as the race progressed. As the lights went out, Benjamin started from the inside of the track (Pole) and unfortunately, this is where most of standing water was. He suffered from heavy wheel spin on the start, resulting in him falling back to P3 up towards turn 1. It was from this point on that he slowly started to fall off-pace from P1 and P2. Benjamin said, “I could feel the tires begin to degrade from a very early point as a result of a car setup mistake, none of which made sense at the moment since we had planned for a drying track.” As the race ended, Benjamin had finished in the tenth position, securing the last championship point available, further assisting him with achieving 4th in the Drivers Championship and 2nd in the Team Championship. As a team, Global Racing Group spent time analyzing the car setup mistake and they are confident that mistake won’t be made again in the future. It’s moments like that where strategy and decision-making come into play and unfortunately, this time didn’t go their way. Benjamin said that he is “…happy with the effort as a team in which they tried to give me a car that would be good for the wet weather conditions and they deserve a big thank you for their efforts.” He finished by saying, “We will be strong for this kind of scenario in the future!”