The inaugural round of the 2017 FIA F4 US Championship was one of the best opening race weekends for the number 24 DirtFish sponsored F4 car. Benjamin found great race pace early on and this has been one of his biggest goals during the off season – to find race pace very quickly and communicate what the car is doing setup wise. Benjamin has been working very hard in the off season on both physical and mental training but he has also been practicing on the business side of motorsports through Global Racing Group’s driver development program. The program focuses on finding and maintaining sponsorships and what it truly means to be a professional race car driver. 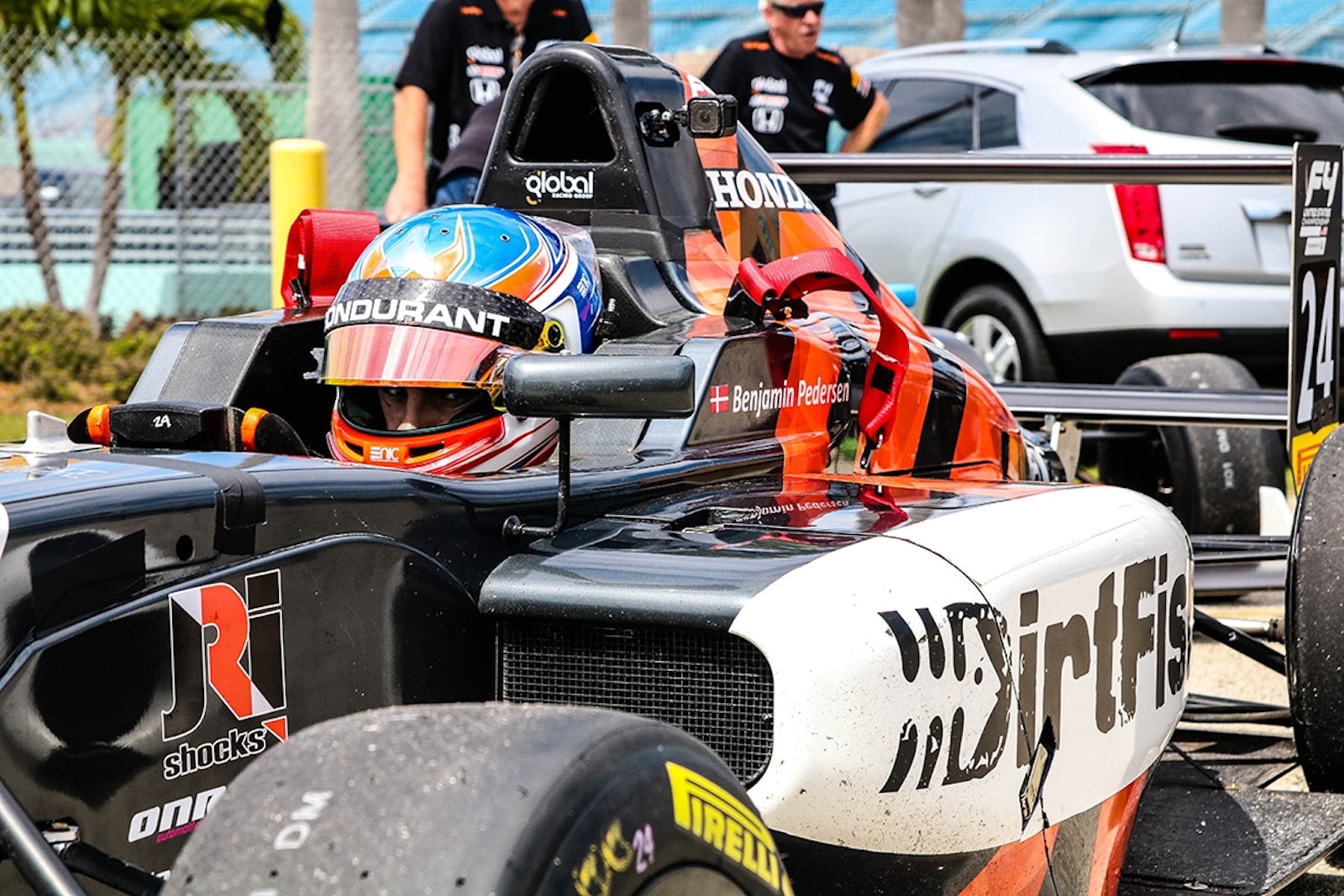 Qualifying for the 2017 FIA F4 US Championship put Benjamin in Pole Position (1st), his best personal qualifying result within the F4 US Series. After detailed debriefs and data review, Benjamin and the team found a great setup for the start of qualifying and this paid off very clearly with a Pole Position. Benjamin stated post qualifying, “I knew qualifying would be very important for this opening race… With 33 cars, there will be lots of battles in the midfield making it difficult to reach the front runners. I knew that if I could qualify well and stay at the front away from the pack, I could have a very good finishing result. I ended up earning Pole Position so that couldn’t have gone much better – exactly what we wanted!” The top 15 drivers qualifying times were all within 0.9 of a second and this shows how tight the competition is. Benjamin topped the times with a 1:24.06 and Kyle Kirkwood (Team USA Scholarship Driver) placed second with a 1:24.13.

Starting from Pole Position (1st) based on qualifying results, Benjamin made a great launch off the line and maintained his lead through the first lap. Shortly after along the banked walls of Homestead-Miami Speedway, Timo Reger took the lead after drafting Benjamin on the long straight and the number 24 DirtFish car would remain in second for the rest of the race. The race would conclude under a safety car after multiple big crashes had occurred, but Benjamin cruised to the finish line securing second place – a great result for the first race of the 2017 FIA F4 US Championship! Benjamin stated in his post-race interview, “That was one crazy race! I would like to thank all of Global Racing Group for providing me with such a great car and crew and I would also like to thank DirtFish Rally school for the endless support as well as Alfa Romeo of Seattle and Egrari Non-Invasive Center for all that you guys do to help me – it’s a very humbling experience! I’m really looking forward to the next race now and I will give it my all so hopefully we can finish up here on the podium again! Huge congrats to my teammate – Jacob Loomis as well for getting 3rd in his first ever F4 US race, it’s a great team result!”

Starting in 8th position based on the best race 1 lap time, Benjamin found himself on the outside row for the standing start. The number 24 DirtFish car got a great launch off the line as the starting lights went out and quickly gained 1 position within the first lap. This race would prove to be a race full of battles and crashes as the race only saw around 5 laps under green flag and this made it very difficult for Benjamin to gain positions. The race would eventually see 3 safety cars and this is what hurt Benjamin the most, as he stated, “The restarts under the safety car is what hurt me the most in this race… I gained lots of positions under green but I would eventually lose them under the restarts. After the race, I sat down with my driver coaches to discuss better techniques and this would eventually show in race 3 as the restarts went much better. This was a huge learning experience for me and I feel much more confident in my restarts now. I’m happy that we brought the car home all in one piece for the start of race 3 so we can push hard for the last race of the weekend as there was many retirements in race 2.” Benjamin would eventually finish in 11th position, just outside of the points within the 33-car field. 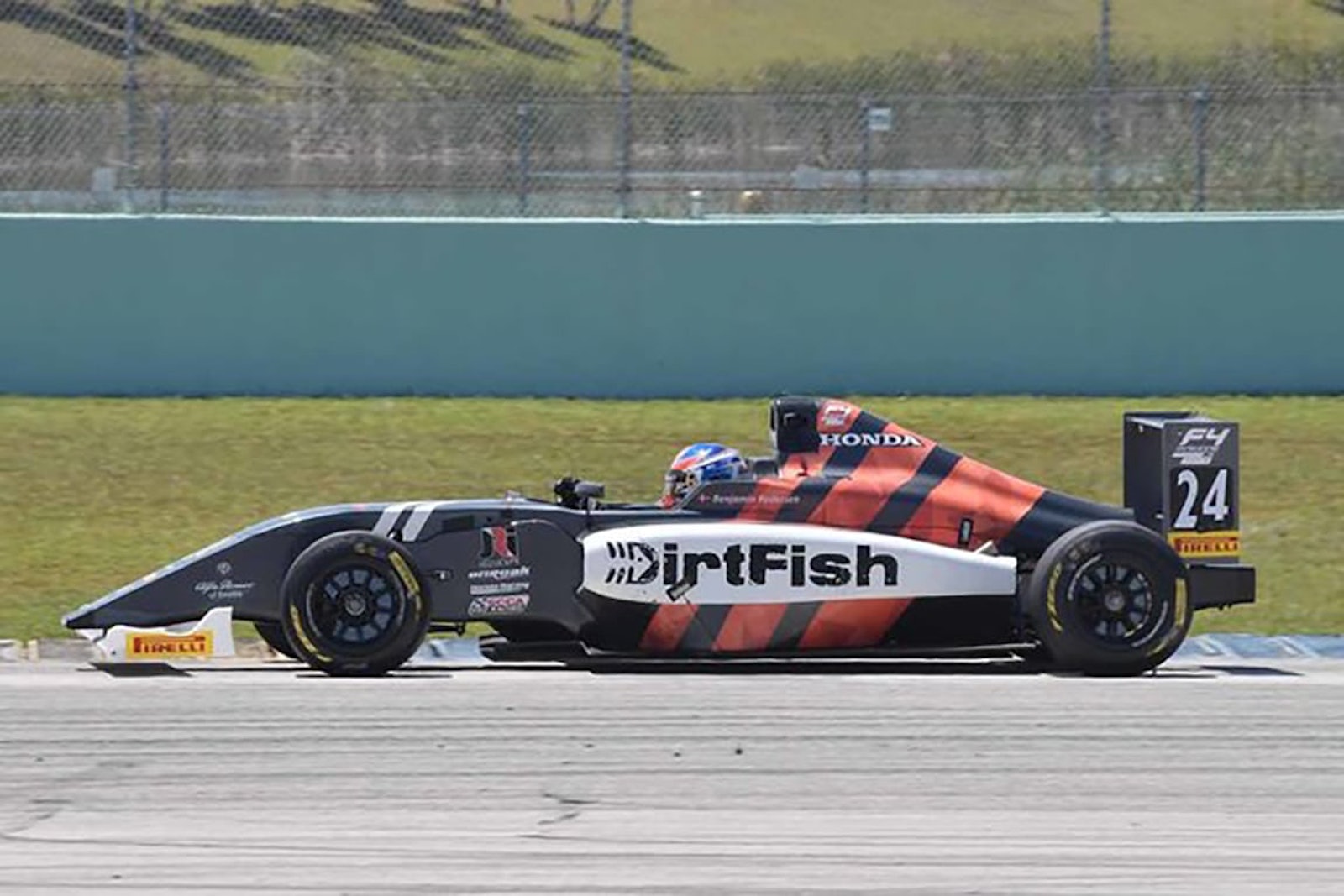 Starting from 14th position based on the best race 2 lap time, Benjamin would again start from the outside row. This race would prove to be one of action as Benjamin quickly moved to top 8 within the first couple of laps after passing people on both the safety car restart and under green flag conditions. Then unfortunately half way through the race, the number 24 DirtFish car got hit in turn 8 after 2 cars made a very aggressive move causing side pod damage and intercooler damage to the car. The car would eventually overheat and Benjamin had to retire the car since it was in dangerous levels of overheating, “It was really frustrating to have been hit in turn 8 by 2 other drivers who tried to take the inside line when there was absolutely no room… The intercooler got bent and fluid started to leak causing excessive heat problems to the engine. We were running really well gaining positions as the race went on and to get hit was really frustrating as we were in top 10 and championship points were well within grasp. We will be ready for the next round at Indianapolis Motor Speedway though ready to give it our all again!”