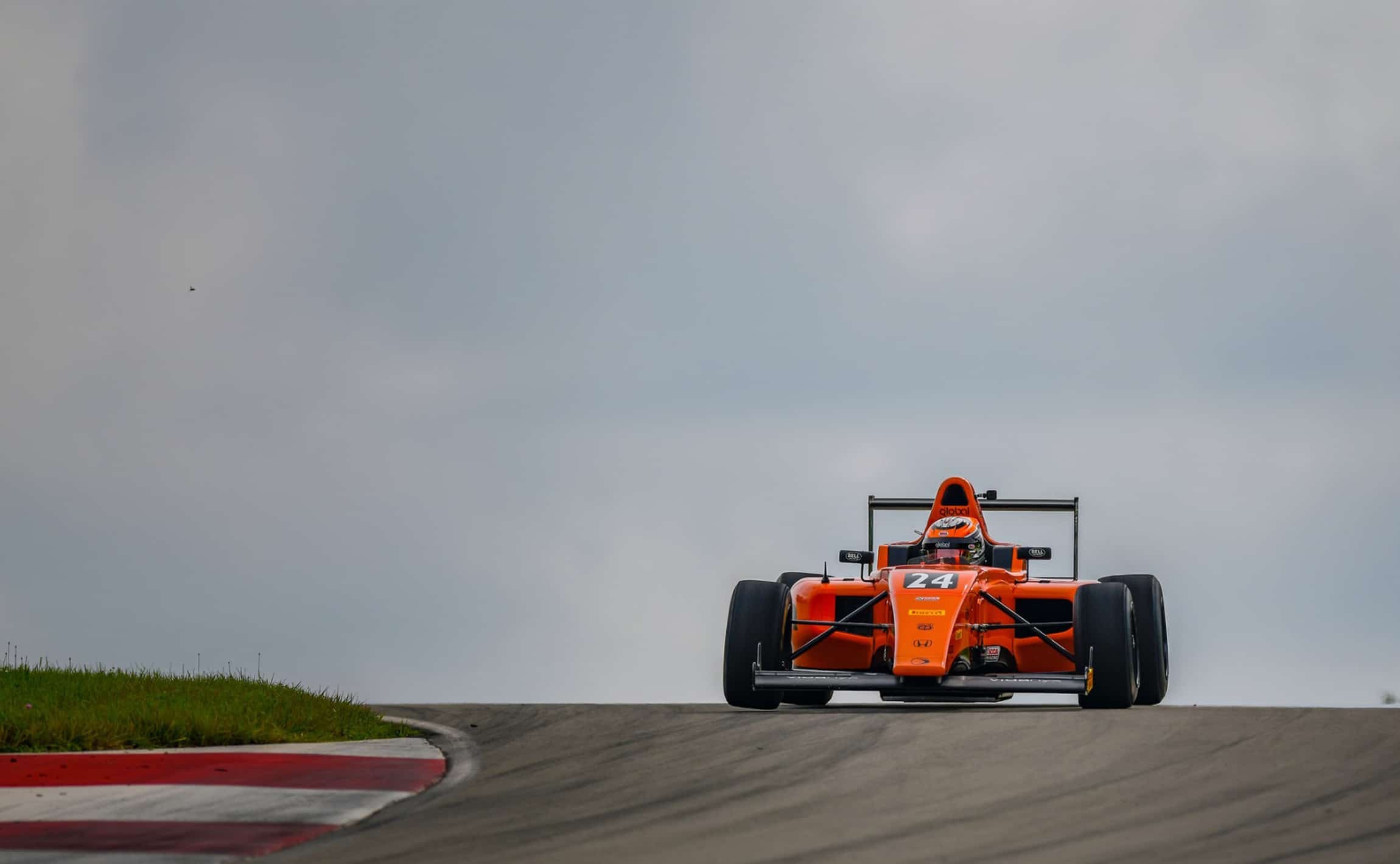 As the Qualifying session got underway, Benjamin immediately shot towards the top of the timing board thanks to a good car setup. As the laps continued, the times dropped. Unfortunately, he was down by 0.3-0.5 of a second from the very top spot for the start of race one. Slightly disappointed with a P5 qualifying result, there was a silver lining. Benjamin would be starting in front of his championship rivals, which meant that this race was going to be critical in that regard!

Starting from the 5th position, Benjamin knew a race win and many championship points would be possible. As the lights went out, he was able to move up to 4th by the end of the first lap. The second lap brought out a lengthy full-course caution for six laps, ultimately taking away opportunities to continue moving up in positions and battling for a race win. With only three laps remaining following the full course caution, Benjamin had his work cut out for him if he wanted to continue moving up through the positions. Luckily, as the green flag dropped, he was able to move into P3 and remained there until the checkered flag came out. Benjamin’s championship rivals finished two places behind him, which allowed him to move closer to leading the overall championship. 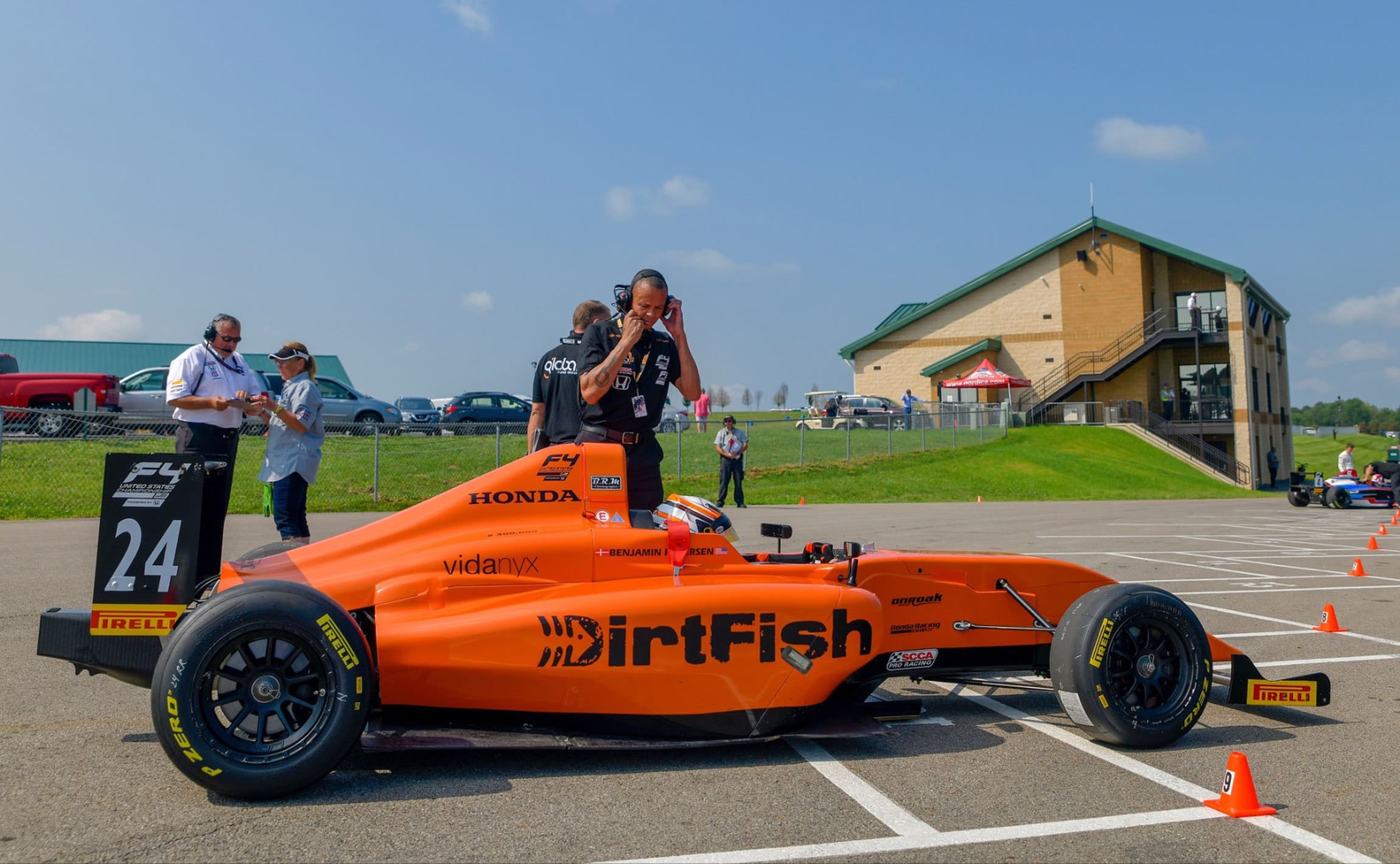 Starting in the 5th position again based on the fastest lap time from race one, Benjamin knew that he would be in a strong position for the start of the race! As the lights went out, he had a strong start and maintained the P5 position for the entire opening lap. Roughly half-way through the race, the driver in P6 made a super late move on Benjamin and made contact, sending him off the track into the grass and stealing his position. Sadly, Benjamin was pushed back to 21st and spent the remainder of the race trying to make up as many positions as possible, but there just wasn’t enough time. Overall that race didn’t hurt his championship points too much thanks to one of the other contenders also finishing outside of the points.

The following race later that day saw Benjamin starting from 10th position, which was based on the fastest race two-lap time. He had some work to do in order to move through the field and score as many points as possible. As the lights went out, he again had a great start off of the line and was able to work his way up to P8 by the end of the first lap.  Unfortunately, there was another full course caution period that lasted for almost 5 laps, taking away further opportunities for Benjamin to make passes during the race. As the race went back to green, however, he was able to make up one more position and finish the race in P7, which is a good result in relation to his competitors in the championship. Overall, it was a slightly strange mix of results but despite this, Benjamin and Global Racing Group were still able to move up to P2 in the Drivers Championship!

Benjamin had this to say about the weekend; “I would like to send out a big thank you to Global Racing Group for providing me with a top class team and car, and of course all of my partners for the support! Pittsburgh was a massive event in regards to exposure as the weekend consisted of 7 different racing series which joined the F4 US Championship.”

The next race weekend will take place at New Jersey Motorsports Park where the team has raced before.  Confidence is high and they should be able to produce some excellent results to move closer to the top spot of the Drivers Championship. The series will then head to Circuit of the Americas for the season finale with Formula One, where Benjamin has achieved multiple wins in his career.  It should be a great event.