DirtFish somehow coaxed the rally driver out of me.

There was a dense layer of snow on the ground when I arrived at the DirtFish headquarters in Snoqualmie, Washington. The office building looked out over the sprawling DirtFish course, once a site for a bustling lumber mill. Historic buildings still stand, today glazed with a coating of white. Lights from the main DirtFish building beckoned invitingly, and so, steeling myself, I got out of my Subaru. I was there to be behind the wheel of another, exponentially more powerful, Subaru.

I was there for DirtFish’s Half Day Program with the all-wheel drive Subaru WRX STI. The first segment of the class was much like a class you would see in any school – students sitting at tables inside a classroom, listening to a teacher. The instructor walked us through the basics of rally driving, emphasizing the differences in braking and turning from regular driving, and the basics of the rally cars themselves. After our brief lesson, it was time to gear up. We were given helmets to wear, and then shuttled off down the hill to the courses we would be driving on.

First up was learning to use the brakes to turn. We gathered in one of the old buildings and were paired with instructors and their corresponding vehicles. The class was split in two, and the first half of the class prepared themselves for actual driving. The student number was small – less than ten people – which fueled a warm and intimate atmosphere of camaraderie and excitement. I was part of the lucky second group, which had the opportunity to watch and learn first before hitting the road. 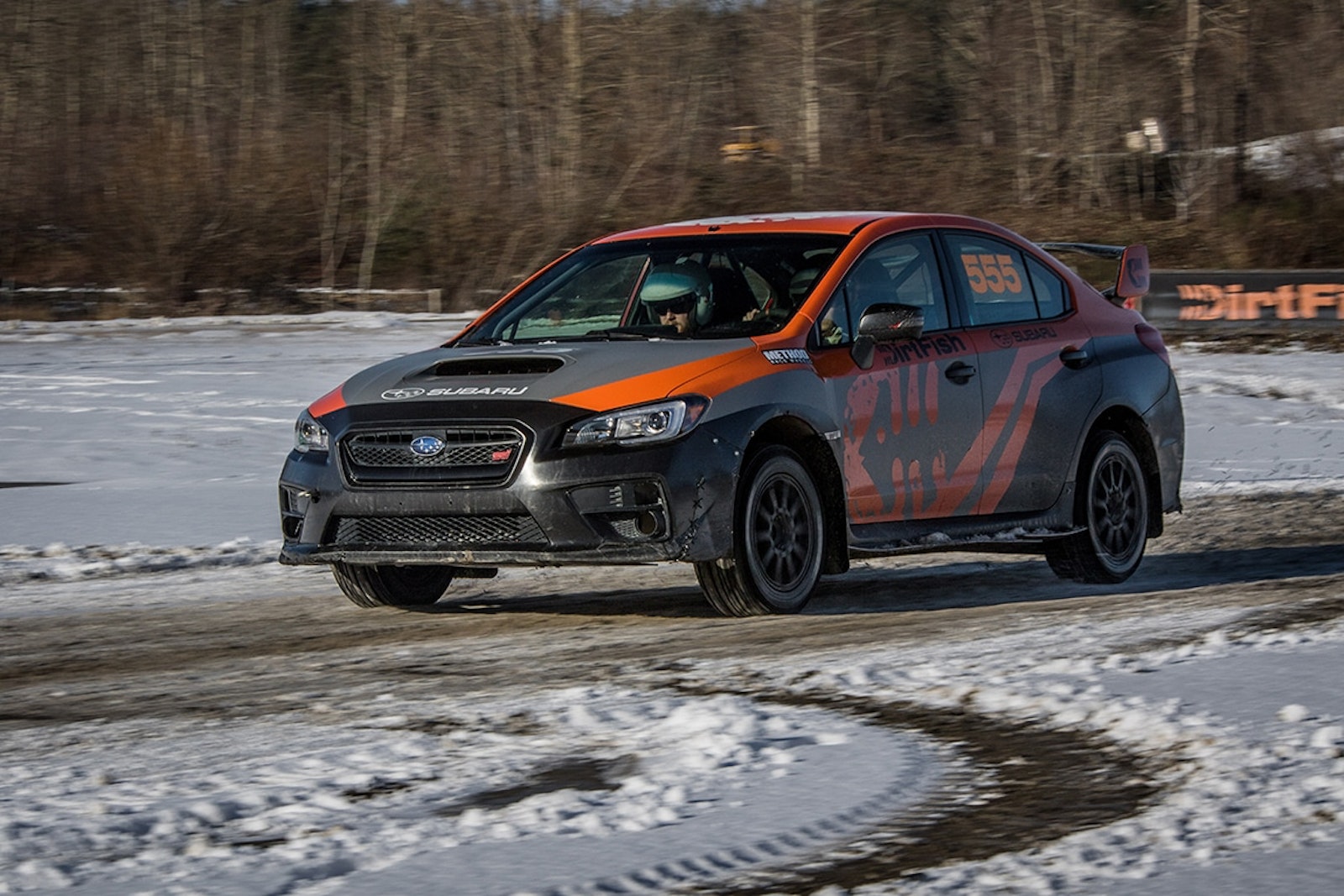 After a few practice circuits, the first half of the class swapped with the second, and it was my turn to drive. I knew how to drive a manual, but it was nothing like the Subaru WRX STI, and many of the basics of rallying were counterintuitive to my norm. My instructor took the time to get to know me and my comfort level, and walked me through the driving techniques with patience and an excellent sense of humor.

Once our turn was finished, the first half of the class swapped with us again, and we, too, had a second chance at the run. It was a simple course, consisting of turning a basic circle, but it was ideal for teaching us the fundamentals, which would quickly become necessary with the second course. The following course was the Slalom, where we had similar requirements but new skills to learn. We did the same class-swapping pattern, and would do the same again for the Boneyard. 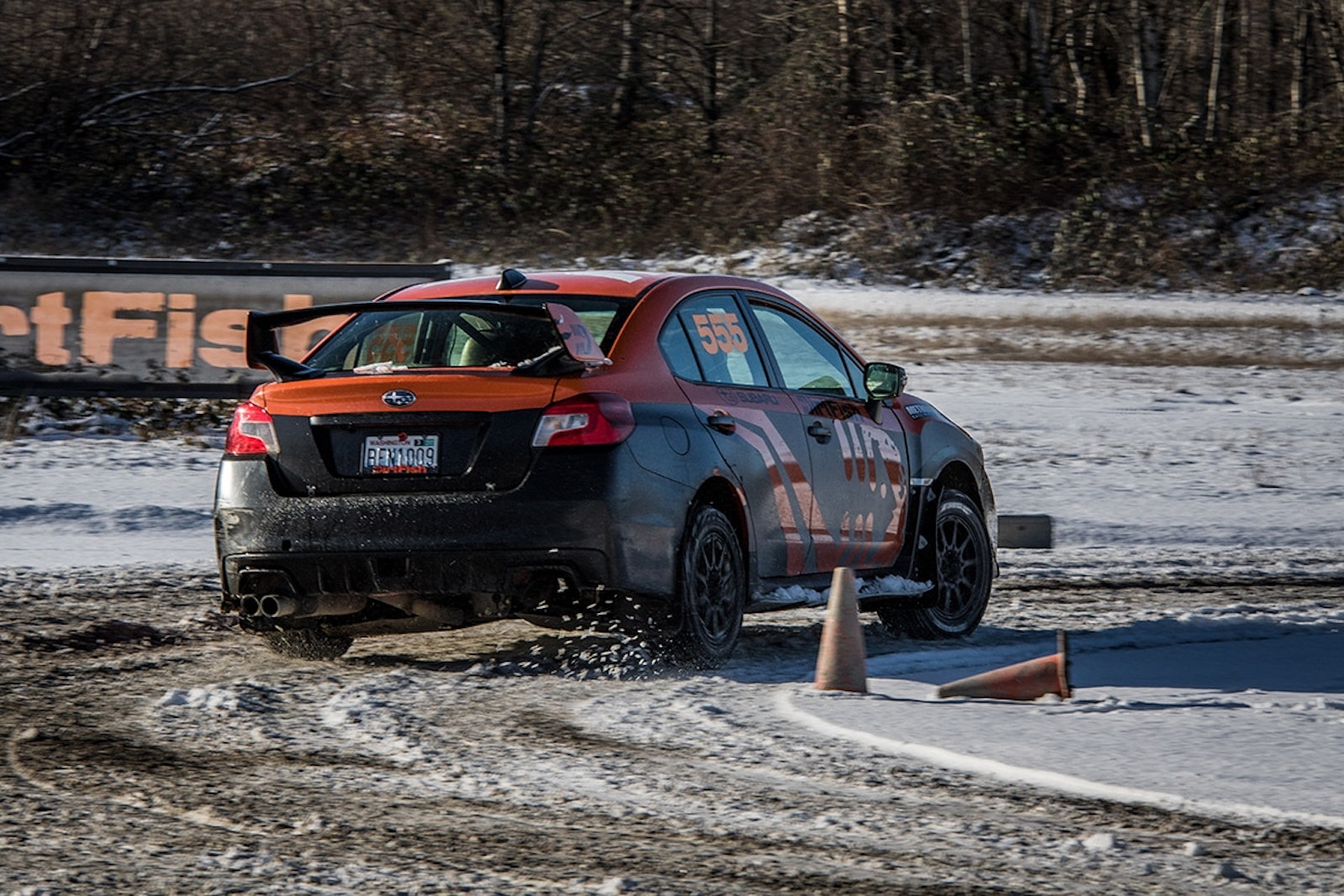 For the final treat, our instructors took us each on a “joy ride,” showing the newbies and uncertain among us (myself included) what our STI’s could really do. For me, a newcomer to the rally world, this was one of the most exhilarating parts of the day. It was one thing to nervously drive yourself, and a whole different thing to be driven confidently and powerfully by a genuine expert.

Sitting behind the wheel of a Subaru WRX STI at the DirtFish Rally School should be on every driving enthusiast’s bucket list. It’s not just a thrill ride, although there’s no shortage of thrills, even on the easiest parts of the track. The school is called a school for a reason. You’re learning, the entire time, how to have better confidence, handling, and control behind any wheel, in any conditions.