When most people think of a rally co-driver, they immediately think of the person sitting shotgun, shouting out all sorts of letter and numbers, potentially including obscenities, while the driver goes flat-out down a mountain road. We at DirtFish like to think that they are the unsung heroes in the sport of rally. There is so much more work that comes from the second name on the entry list, especially for small to medium-sized teams.

The co-driver’s job starts long before they even show up for the race weekend. First, one of their most important pre-race jobs is to develop a plan for the team based on the goals of the driver. Whether the driver is just looking to finish the race, beat a certain competitor, or go all-in for an overall win, the co-driver will set the driver and team on the best path to achieve the overall goals. “Sometimes less sleep and more fun as a team while being middle to back of the pack is a better weekend for team goals. But of course, as a co-driver, we are secretly taking every moment seriously and trying as hard as possible to set up for the fastest weekend” says co-driver, Krista Skucas. “Ironically, the more serious the race is, the less sleep the co-driver gets because of staying up so late for note writing and prepping!” says Krista. 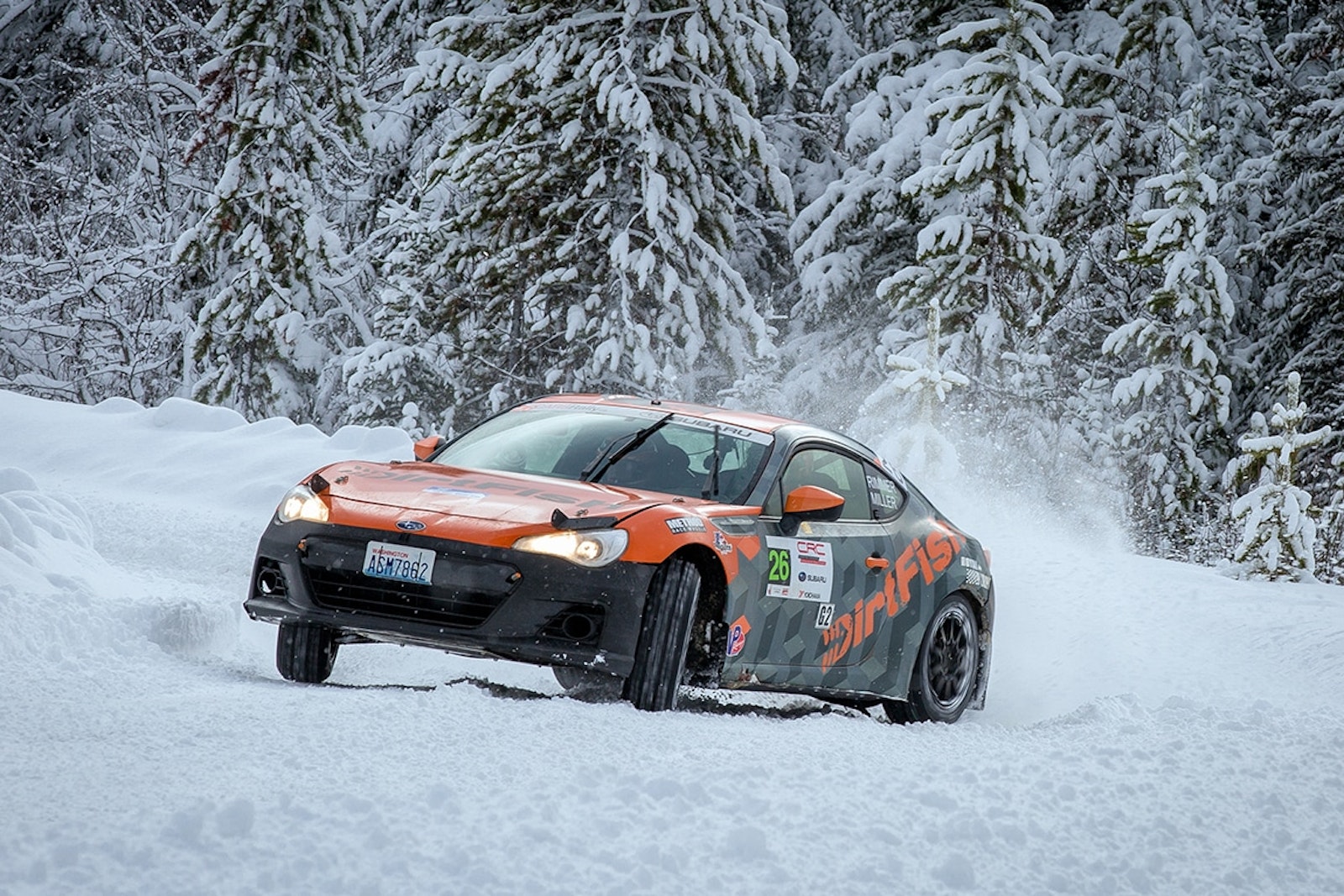 Along with setting the tone based on the driver’s goals, co-drivers often times are also in charge of team logistics and schedule for each race. Co-drivers will have to coordinate flights, rental cars and hotel rooms for themselves, the driver and the entire crew, as well as putting together a complete movement plan detailing all of the team members’ daily schedules with meetings, meals and any other group activities. Without a proper movement plan, the entire race weekend could be a complete mess for everyone on the team, making it extremely difficult for everything to go off without a hitch.

When race weekend approaches the “hard work” begins for a co-driver. They basically become the clock and calendar for the entire team, making sure each person and the car is where they need to be at the correct time (driver’s meetings, tech inspection, service setup and teardown, etc.). Once they show up to the location of the race, the rally HQ is one of their first stops to pick up route books, pace notes (if provided by the rally organizers), and credentials for themselves, the driver and the crew for the whole weekend. Besides the passenger seat of the car, rally HQ will be one of the most important locations for them to stay up to date on stage changes, schedule changes, stage cancelations and comparing the stage times they have versus what the rally organizers have recorded.

Prior to the start of the race, the drivers and co-drivers will spend a day or two doing reconnaissance (or recce) of all the stages that will be competed on throughout the weekend. Depending on the rally and the organizers, there may or may not be pace notes provided to the teams. If they are provided, the recce will be used to check them for accuracy, make any changes needed, note any custom requests from the driver or note any hazards that may have been missed. If pace notes aren’t provided by the organizers, it is important for the duo to take their time during recce to ensure the co-driver has the correct information, but also keep to a rate of speed to help illustrate the road accurately while staying at or below the max recce safety speed outlined by organizers. Accurate and smooth notes are the number one most important tool of the race. They need be communicated with clarity and brevity at full-speed during the race, allowing the driver to know what to expect around each bend and over each crest. 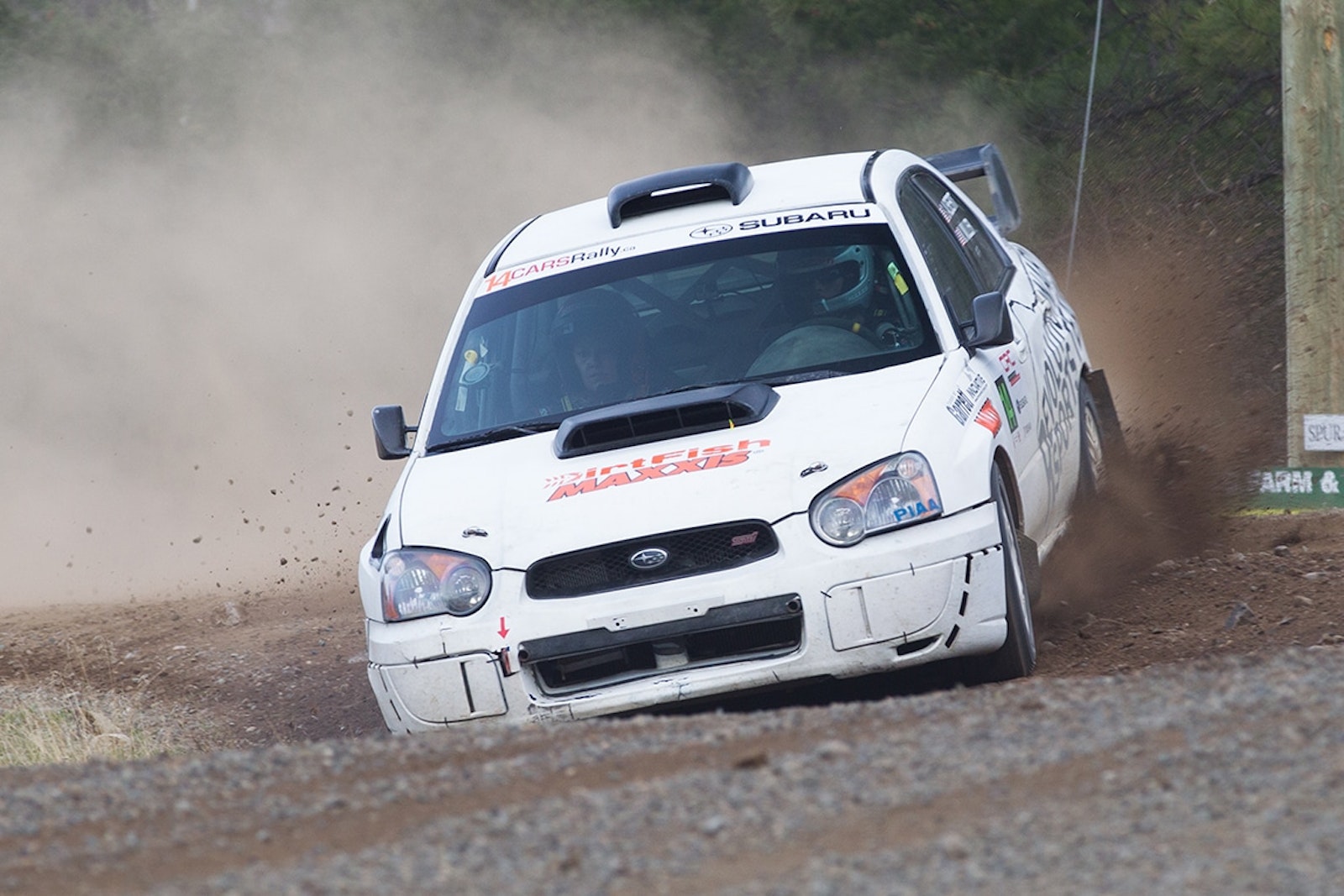 Now on to the most important day of the job for the co-driver; race day! It is their job to ensure the driver can devote all of their attention to driving and driving their best. Because of this, they need to know where the driver is at all times and help them manage their time, especially when it comes to distractions (bathroom breaks, talking to friends/fans, etc.) and making sure their driver doesn’t disappear. Proper management of the driver and their schedule requires them to calculate the check-in times for each time control and the duration of each service throughout the weekend. Any miscalculation will result in time penalties for the team. Like most close relationships, communication is absolutely key.

Once the racing begins, the driver and co-driver will depart from rally HQ at a predetermined time, given to them by the rally organizers. It is then that the co-driver’s job is to become the driver’s navigation system – giving them directions on the transits to the start of each stage, ensuring they aren’t speeding or going too slow (each team is given the same amount of time to complete all transits throughout the rally), and even keeping the driver amped up and stoked on those long transits between stages. Once they arrive at the beginning of the stage, the co-driver will check-in with time control on their exact minute where the race officials will provide a start time that is anywhere between 1-3 minutes after they checked in (typically).

Now, it’s time for the fun part! The start of each stage will go something like this: “30 seconds… 10 seconds… 5, 4, 3, 2, 1, GO! Left 6, 40, Right 4 Opens tightens 2 no-cut, Kinks into Left 5 into Right 4 short, 50, Right 3, 150…” and so on all the way down each stage (for example). This isn’t as simple as calling out all of these numbers and directions, there is so much more that goes into it; co-drivers need to be able to accurately deliver the notes at the correct moments, speed, and tone for the driver, all while knowing when to encourage the driver to push harder or dial back in order to speed them up or slow them down.

Some of the best co-drivers in the world find it imperative to use voice inflection and tone to set the mood for the stage, while communicating all of the information the driver needs to know. Watch an in-car video of Craig Drew and David Higgins- Craig uses voice inflection with each and every pace note he is reading. It’s almost like adding another dimension to the pace notes (as if they needed another) and can be extremely helpful in the success of the team. To make the co-driver’s job a little more difficult, they need to be able to modify their notes on the fly for any surface changes that may have occurred between recce and the race. This is some FUN STUFF!

Co-drivers are also considered the first line of communication in a rally, like if any other cars are broken down on or have gone off the road. They will need to note the car number and mileage of where car is on the stage and communicate that information to the officials at the finish.

There is still so much more to the responsibilities of a co-driver, but there is obviously so much more than just hopping in the passenger seat and telling the driver what’s coming up in front of them. Without them, you wouldn’t see drivers going nearly as fast throughout the stages, and there would be a lot more disorganization within the team.

If you’re interested in learning more about co-driving and actually get a little bit of experience, sign up for our Two Day Co-Driving Clinic with Subaru Rally Team Co-Driver, Craig Drew. CLICK HERE for details!

Update 4/12/16: There are only 5 spots left in the first day of the Co-Driver Clinic; the second day is SOLD OUT! Please click here to enroll in Day 1 of our Co-Driving Clinic, or check back for future availability.