The New England Forest Rally was set to be the biggest, most competitive rally of the 2015 Rally America season. Not only would six time champion and DirtFish driver, David Higgins, be shooting for his sixth win of the year, but by winning this event he would put his seal on a seventh Rally America Championship title. However, with Ken Block and Travis Pastrana making an appearance at the event as well as ex-Subaru factory driver, Ramana Lagemann, (who was running the new Ford Fiesta R5 2 liter normally used in the World Rally Championship) it wasn’t going to be an easy win… 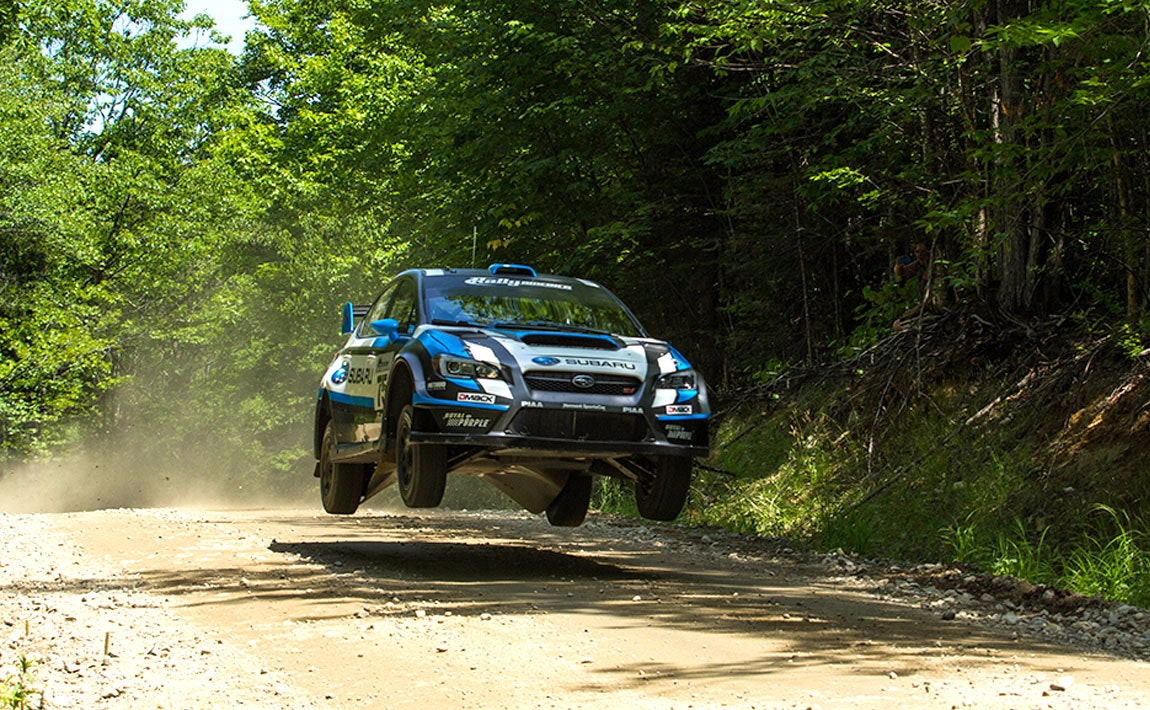 The rally began on a beautiful, sunny Friday with the cars and drivers ready to start flying down some dirt roads. What better way to start a rally than with the infamous Concord Pond Stage, which for many drivers is one of their favorite stages in the entire Rally America series because of its high speeds, big jumps and difficult turns over crests. David Higgins and co-driver, Craig Drew, made it apparent pretty quick that they wouldn’t be going down easy by laying down a very fast time five seconds ahead of Pastrana and six seconds over Block. Lagemann hit a rock the wrong way causing a ball joint to break and having no real control of his steering, he was forced to pull off and wasn’t able to finish the rest of the day’s stages, so he would have to Super Rally for Saturday. 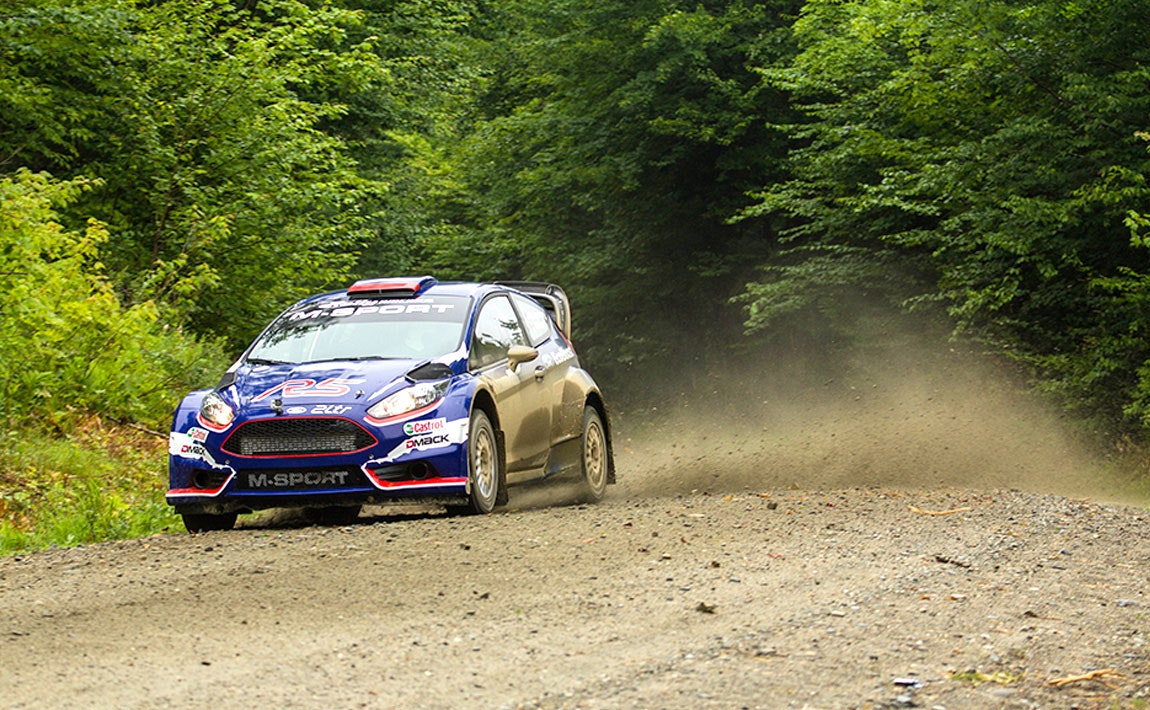 In the Super Production class, Nick Roberts and Rhianon Gelsomino were running extremely fast, sending it as big off the jumps as some of the Open Class cars! Towards the end of the first stage they got a puncture that slowed them down, but not by much, and even after finishing with a flat they were only twenty seconds behind Lauchlin O’Sullivan. This was just the beginning of a difficult weekend for Nick and Rhianon. 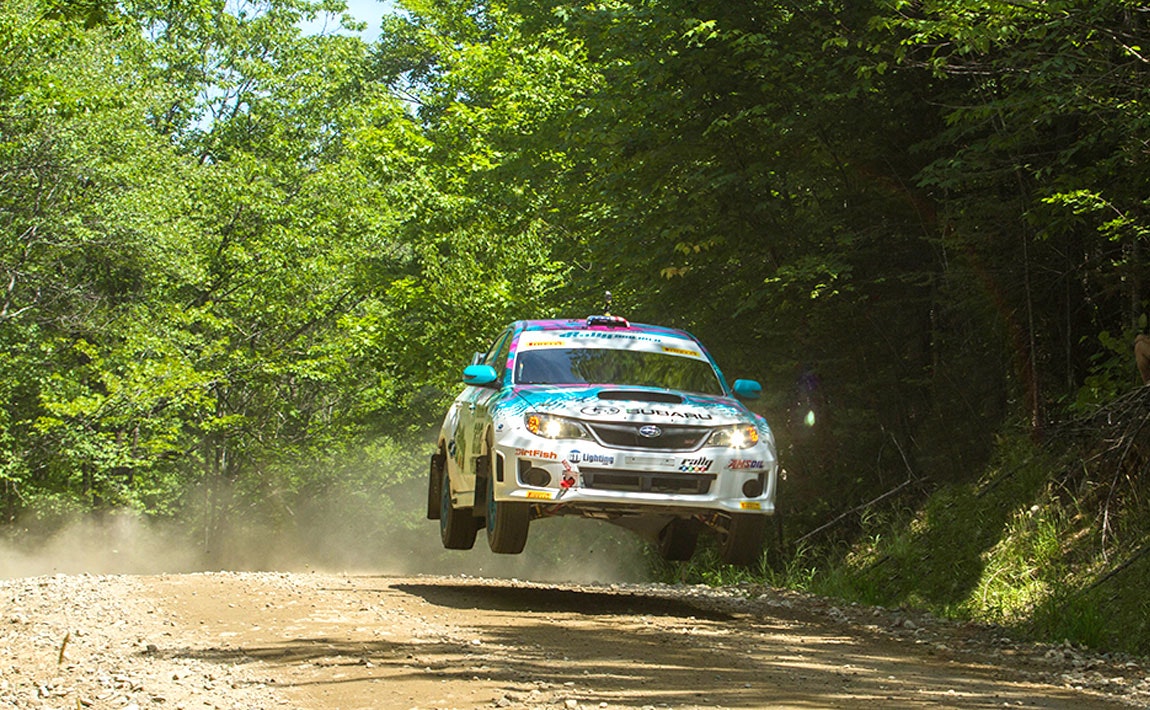 Stages two and three had a combination of tight, technical sections with some very fast corners and was littered with boulders protruding from the surface of the road that would destroy suspension components of even the most highly engineered cars. The roads were also very dry, which would mean very fast speeds but also meant the dust would be difficult to navigate through. Being first on the road, FY Racing’s Adam Yeoman and Jordan Schultze had the advantage on these stages. None of that took away from the fact that Higgins was on top of his game this weekend as he powered through the dust and rough terrain to extend his lead over Block. Unfortunately the alternator on Pastrana’s car malfunctioned causing the car to die on transit to stage two, he would also have to super rally for the following day.

Back in the Super Production class Nick and Rhianon were on one flying down the stages, crushing their times from the previous year! About two miles from the finish of the second stage, Nick got a little wide and into the loose gravel on the outside of a corner causing him to go even wider and strike a boulder with the right rear wheel. The impact sent them spinning 180 degrees into the ditch, rolling the car. The only damage to the car was a broken piece of suspension, his crew was able to fix it, get the car rolled back over and drive it back to service. Unfortunately the following day on stage three, the turbo in his car blew and the decision was made to retire from the rally giving O’Sullivan the Super Production win. 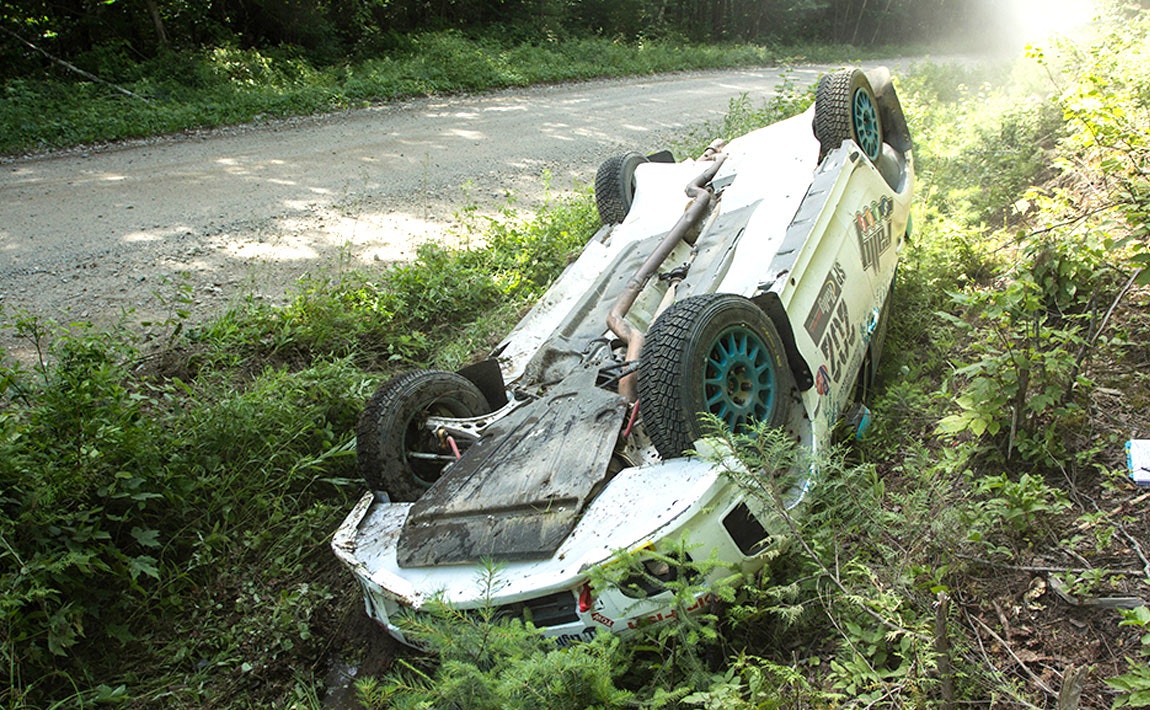 Higgins and Drew were at full attack all weekend. This was especially evident on Saturday, where David was pushing the new 2015 Subaru STi harder than he’s done all year, yet again proving what he and the car can really do against some of the world’s best rally cars. The morning of day two was dark and rainy making the roads on the first few stages extremely slick, catching a few people off guard including Ken Block who went wide on a corner bouncing the rear end of his car off an embankment causing the car to spin. Because of that, Block lost even more time to Higgins and even allowed Pastrana, who didn’t complete two stages the previous day, to gain time on him.

At the end of the day, Higgins and Drew were victorious beating out Block and Gelsomino by over five and a half minutes. Of course we have to give huge props to Travis Pastrana and his co-driver, Chrissie Beavis, for their huge push to make up for the massive 28 minute Super Rally penalty from the previous day and making it all the way up to third place overall by the end of the day! 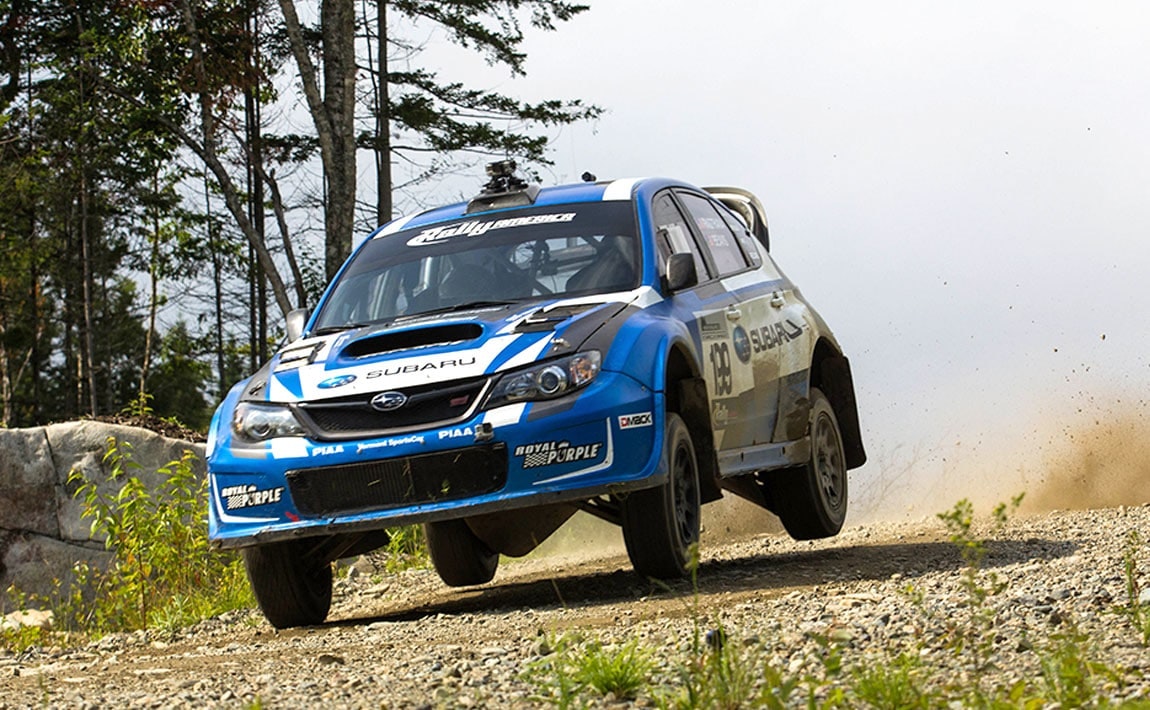 The other class to watch over the two days of racing was the highly competitive two-wheel-drive class. This would be the first time Brendan Reeves would be competing in the Rally America Championship since winning the 2WD championship in 2013. With him driving the new lighter and faster M-Sport Fiesta R2 1 Liter, the regular competitors would have a difficult rally ahead of them. Like Higgins, Reeves was on fire! He dominated the class and by the time he finished the final stage there was a margin of nearly twelve minutes over the second place finisher, Troy Miller. 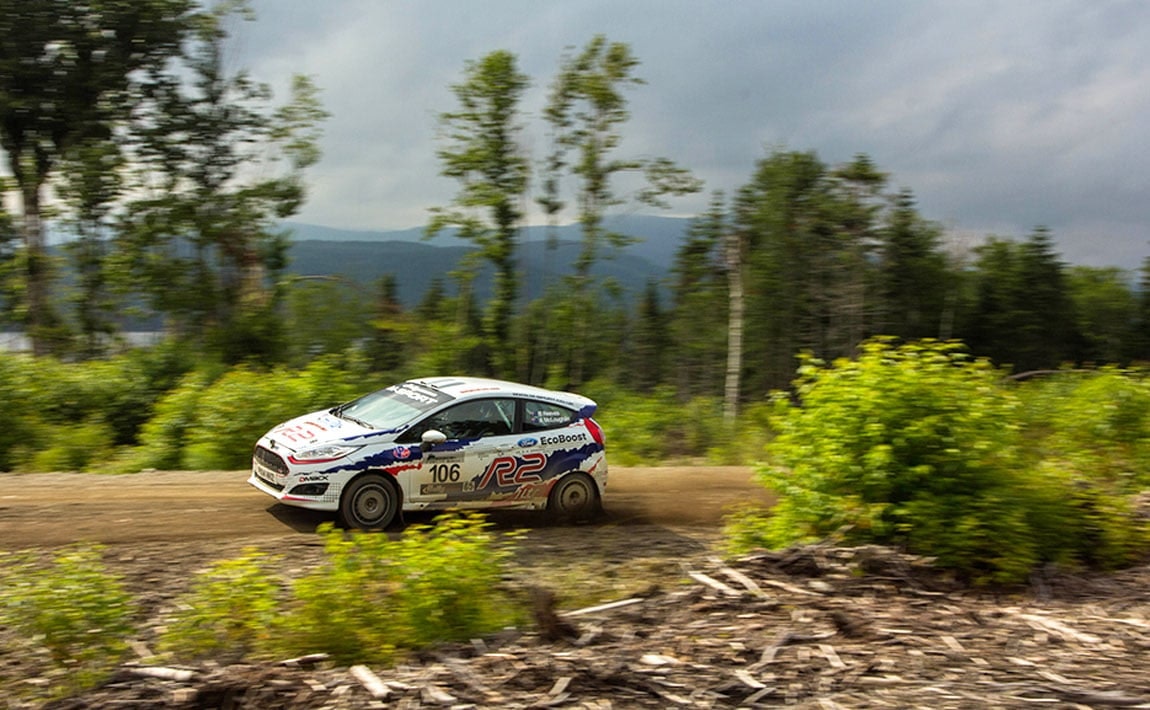 All in all it was a very eventful weekend to say the least, with many of the top drivers from each class out on the first stages, new cars being tested for the first time in the US and driveres being pushed harder than ever before. This was by far the most anticipated event of the year and even with a little bit of hardship the teams and roads didn’t disappoint with the competition and skill that was demonstrated. It was also made apparent that Subaru and David Higgins are definitely a force to be reckoned by showing everyone what they are capable of.