Mattias Ekstrom has been crowned the new FIA World Rallycross Champion after scoring enough points at today’s German RX round to secure him the title with one round of the World Championship still remaining. Olsbergs MSE driver Kevin Eriksson took the Germany RX win, claiming his first every victory in the FIA World Rallycross Championship presented by Monster Energy. Petter Solberg finished second, while fellow Norwegian Andreas Bakkerud claimed the third podium spot.

Driving for his own EKS rallycross team, Ekstrom finished fifth this weekend and is now 30 points ahead of last year’s World RX Champion Solberg in the drivers’ standings. Even if Ekstrom does not complete the final round of the Championship in Argentina, a maximum score for Solberg would only draw the Norwegian level and Ekstrom would still win on countback of victories.

“This is probably the best day in my whole motorsport career – it feels like I have electricity running through my whole body,” grinned the new rallycross champion, Ekstrom.

He continued: “I have a lot of amazing memories: from winning the Swedish Touring Car Championship back in 1999, my first DTM title in 2004, my Race of Champions win against Loeb in Paris, and also against Michael Schumacher in 2007, then my second DTM title. Now I’m the new World RX Champion and this feeling beats it all because when I started EKS from scratch less than three years ago, this was my dream. I have always wanted to go to an FIA prize-giving ceremony and now I finally can. This is a huge effort for my family, the team and all the guys who have worked to make this happen. To become an FIA World Champion is what I have always wanted and it is the best feeling in the world. Obviously, I owe a lot of gratitude to my employer, Audi Sport. My bosses gave me permission to compete at the Estering in order to maximise my chances of winning the title. That couldn’t be taken for granted, and I’m very thankful for this. I hope that by clinching the big trophy, I was able to put a smile on their faces.”

Today’s event was won by Sweden’s Kevin Eriksson who started on the second row of the grid of the final. Solberg was fastest to the first corner which awarded him the Monster Energy Super Charge Award, but Eriksson stunned his competitors as he pulled off a sideways move from the outside and managed to take the lead, which he retained for the rest of the race. 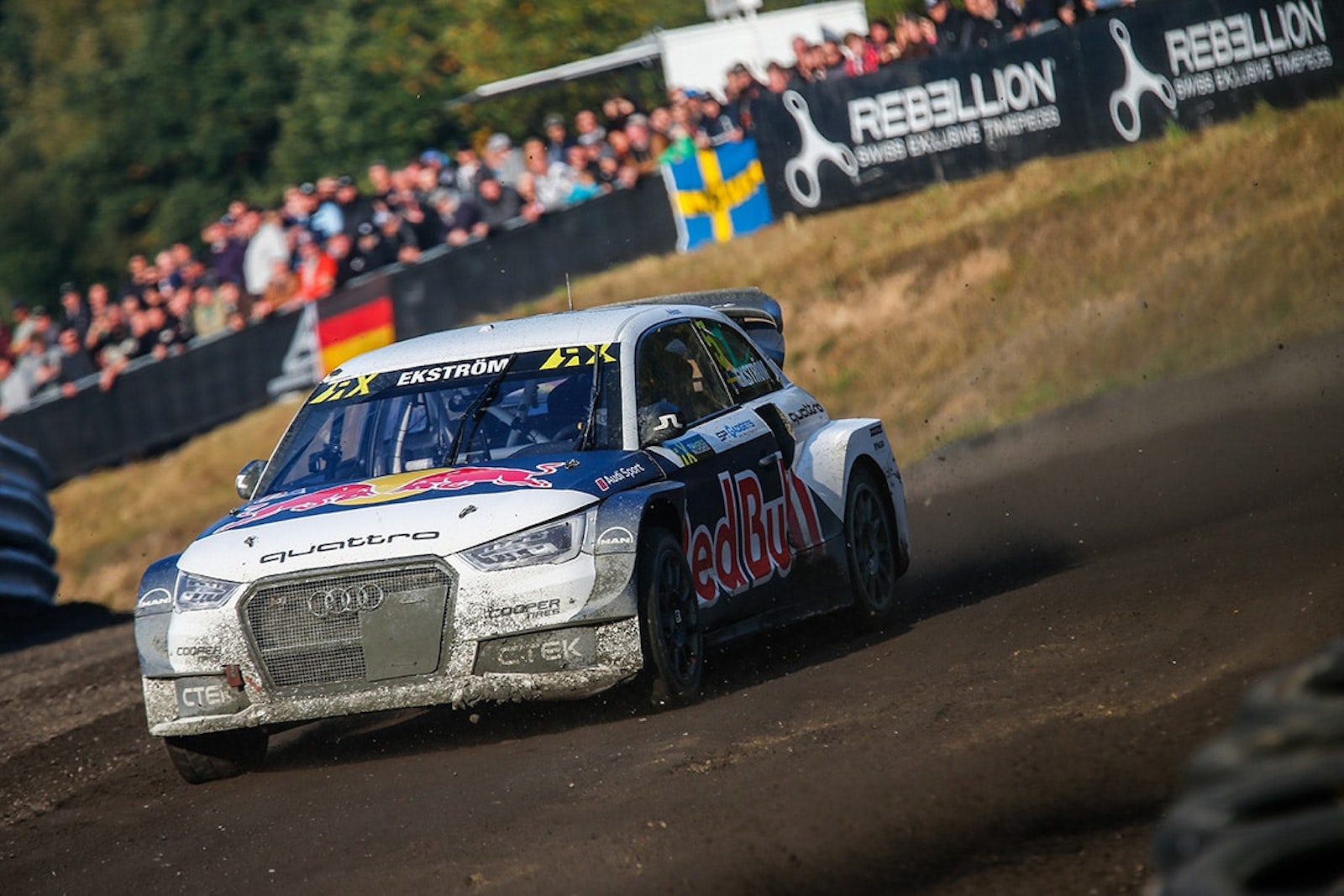 “I am speechless,” explained Eriksson, who has become the seventh different winner in World RX this year. “I saw Petter lead off the start and planned to stay behind him but then I saw an opportunity to go on the outside and hoped for the best. Somehow it worked! I felt I had really good speed throughout the weekend and to beat these guys you need to be driving at your very best. This weekend, everything came together and we got the consistency I needed to take the win.”

Second-placed Solberg was first to congratulate Eriksson on his debut World RX victory. “I am very impressed by Kevin. He won the Swedish Championship last weekend and now he has gone one better and take his first World RX victory, which was very well deserved – especially when I had a clear line into turn one and my car is very good on the gravel.”

Solberg continued: “To be honest, I am sad that the Championship is over for me. I have been fighting all year for my third World RX title and I hoped it would go down to the final round and the team were really motivated. It is so important for me to thank my amazing team – I may be the guy driving the car, but the car was so fast this weekend, I think one of the fastest on the track. I can only say thank you for all the hours they have spent in the last two weeks, making small changes which could make a difference for us. They have worked so systematically; second here is a great win for the whole PSRX team. Finally, Mattias is a very worthy winner, he has won a lot of races this year and been very consistent – big congratulations to him and to EKS.”

Hoonigan Racing Division’s Andreas Bakkerud was relieved to make it home in third place, after suffering from smoke inhalation for the duration of today’s final. He took up the story: “I had exhaust fumes and smoke in the cockpit for all six laps of the final – I have never wanted to see the chequered flag so much in my life! Then in the middle of the race, I also lost my gear lever which made life even more difficult.”

Reigning FIA European Rallycross Champion Kevin Hansen continued his fantastic form this season in the Peugeot 208 WRX Supercar to finish fourth overall in Germany. The 18-year-old commented: “It was nice to be back in the World Championship this weekend. The first day was a little difficult but I knew that our work had taken us in the right direction during Sunday morning’s warm-up. I don’t really know what happened in the final. The first turn was just crazy. Someone hit me and I ended up fourth, for the second time this year. With two fourth places and the European title in the bag, I am pleased with my season.” 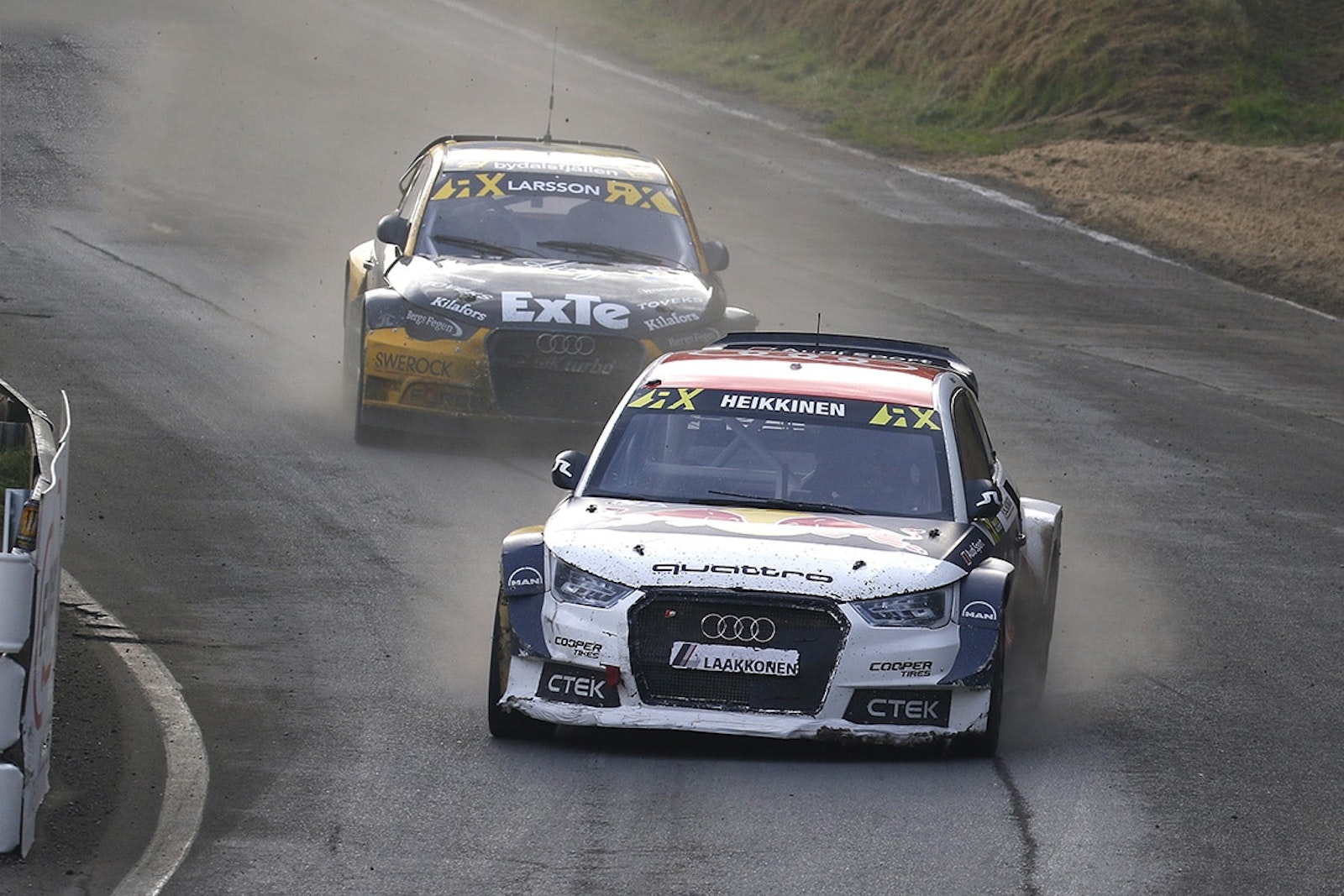 Meanwhile, Volkswagen RX Sweden’s Johan Kristoffersson entered the event with a mathematical chance of taking the Championship to the final round, which continued into the final, but a puncture on lap three while running fourth put him out of contention and he eventually finished the event fifth overall. Solberg’s second-place finish has seen the Norwegian move back to second in the overall leaderboard – four points ahead of Kristoffersson.

Sixth place was taken by Ekstrom’s team-mate Topi Heikkinen. The healthy points score taken by Heikkinen and Ekstrom this weekend has seen EKS extend its lead over Team Peugeot-Hansen in the Teams’ Championship by 17 points going into the final round of the season.

Elsewhere, America’s Tanner Foust started his second World RX event of the season with Volkswagen RX Sweden but was hampered by some minor problems on day one, which meant he did not qualify for today’s semi-finals.

Germany also marked the final round of the FIA European Rallycross Championship for both Super1600 and TouringCars, where both championships went down to the wire. In the Super1600 Championship, Hungary’s Kirsztian Szabo won in his Skoda Fabia and took the 2016 title by one point over Denmark’s Ulrik Linnemann who finished third in Germany. Egor Sanin finished runner-up in today’s event. In the overall standings, Kasparas Navickas ends the year third overall.

The TouringCar Championship proved just as close as Ben-Philip Gundersen triumphed over Sweden’s Magda Andersson by just one point. It was David Nordgard who won today’s event, followed home by Andersson and Anders Braten in third. Third overall in the points at the end of 2016 is Fredrik Magnussen.

World RX Managing Director for IMG, Paul Bellamy, concluded: “Congratulations to Mattias Ekstrom who has become our new FIA World Rallycross Champion after forfeiting his first DTM race in over 15 years. Both Mattias and EKS have worked relentlessly since entering full-time in 2015 and for Mattias to have won in both DTM and now in rallycross proves what a natural talent he is behind the wheel. To become World RX Champion is no easy feat – we have some of the best drivers in the world competing in our Championship. Well done to Kevin Eriksson and Olsbergs MSE who took the first win of the year, Kevin’s pace during today final was extraordinary. Congratulations also to Krisztian and Ben-Philip who are our new Super1600 and TouringCar Champions – it was very exciting to see both Championships being won by just a point and just goes to show how competitive both these categories have become. On top of the exhilarating on-track action, we’ve also had a sell-out crowd in Germany this weekend and it’s always encouraging to see how popular our sport has become.”

The season-closer to this year’s World RX Championship will take place in Rosario, Argentina, at the end of November as rallycross returns to South America for the third year.

Full results from Germany RX can be found on the following link: http://www.fiaworldrallycross.com/result/ger/2016

Championship standings can be found at: www.fiaworldrallycross.com/standings