Following Saturday’s cancelled stage and Sunday’s rest day, the riders and drivers were back in action on a modified 161 kilometre special route, the first half of this year’s marathon stage.

Due to the persistent bad weather, a new course mainly taking place on sandy terrain was designed from Bolivian capital La Paz to Uyuni with the competitors separated from their mechanics and having to repair their vehicles alone for the first time.

318 vehicles started the race one week ago, with only 110 bikes, 25 quads, 72 cars and 48 trucks still trying to make it to the finish line. Who will prevail? 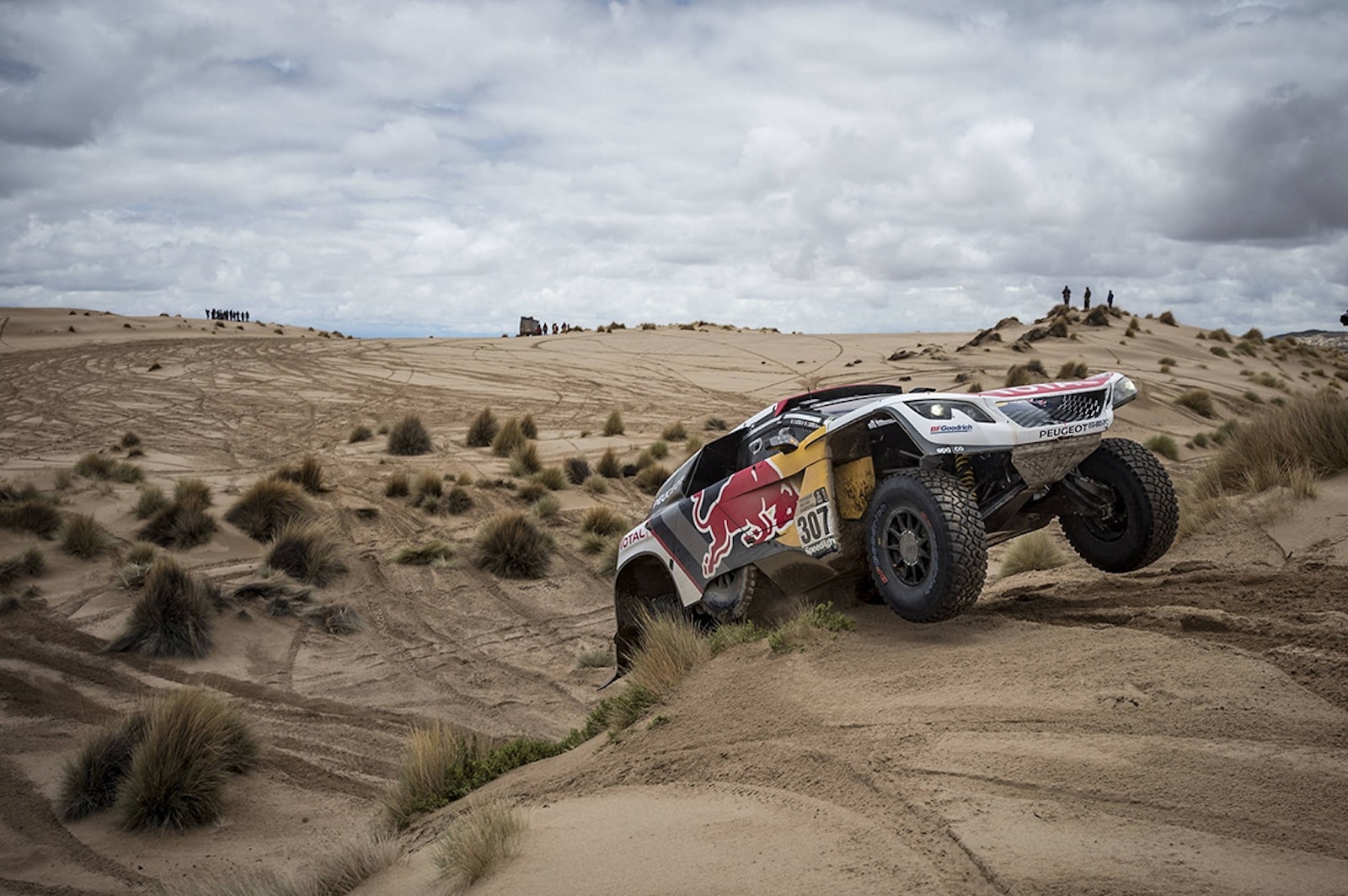 12-time winner Peterhansel enjoyed himself on the sand to get the better of a high level duel with Loeb and edge his second stage of the race.

The French Team Peugeot duo pushed each other all the way with Peterhansel taking it by just 48 seconds, ensuring he keeps a slender advantage from his compatriot at the top of the overall leaderboard.

Giniel de Villiers in the Toyota Hilux placed third with Nani Roma taking advantage of a tough day for Cyril Despres to finish fourth and sneak onto the virtual podium of the Dakar.

Peterhansel said: “It was small stage, but it was very interesting. There was a lot of navigation and it wasn’t easy. It was a little bit easier for me, because there were two cars in front of me and some tracks to follow, but we were doing good with the navigation already. The overall classification is still very close, but it’s a really interesting race for everybody, I think. We’re still in the fight and that’s the most important thing.”

Loeb added: “It wasn’t a long stage, but it was quite complicated, with a lot of sand, dunes and navigation at the start. At the end, there was a lot of mud, with big water splashes in faster sections, so we had to be a bit careful, but it was OK and there is no problem with the car. There’s still a long way to go.” 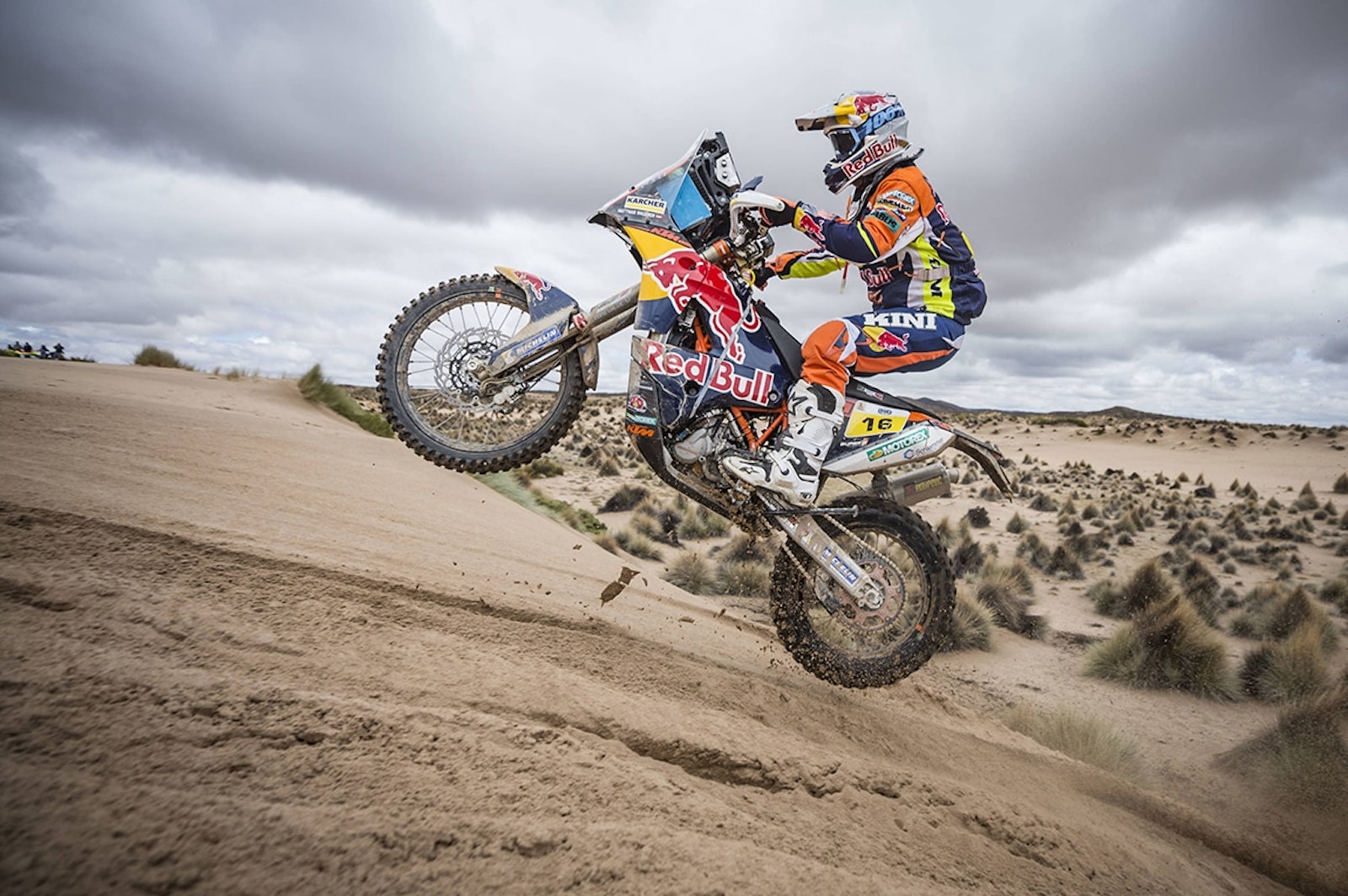 Another day, another different winner in the exciting bike category. Ricky Brabec this time took the honours by clinching Stage 7 from teammate Paulo Goncalves.

The American overturned an 18 second deficit to Goncalves after 90km to end up winning with a gap of one minute and 44 seconds.

KTM Factory Team rider Sam Sunderland still sits at the top of the standings after placing third but he had a scare 38km in after stopping in the sand dunes, 300 metres away from the correct route before recovering and limiting his losses.

Sunderland said: “It was a lot harder a stage than we were expecting – there was a lot of navigation. I lost some time today because it was a sandy stage and the guys from the back can see the tracks cleanly. I’m really happy with everything on the bike. It’s the first stage of the marathon day and the tyres are good so we’ll just keep ticking along.”

Walkner added: “I wanted to have a good position for tomorrow and I’m pleased it has worked out like this. It was a short stage, but tricky with rough terrain and lots of navigation. We’re set for more difficult navigation this week so the goal is to stay in a good position just off the front. Avoiding mistakes will be the key.”

Sergey Karyakin won his first stage in 2017 to take command of the general classification on his Yamaha.

The Russian has been consistent all race but finally picked up the elusive stage win with an assured performance to see off Axel Dutrie. Ignacio Casalehad another solid day to finish third and keep himself right in the mix.

Dmitry Sotnikov has been in the top ten in every stage so far since the start. He now has his victory with the trucks completing Monday’s action. The Russian stormed to first place in his Kamaz truck, beating Ton Van Genugten by nearly three minutes and climb up to second in the race standings behind Gerard de Rooy.

Race footage available for download, daily show on Red Bull TV and more – check out our extensive coverage of the Dakar 2017 HERE.