Coming into 2015 DirtFish took a big step forward, by creating the two DirtFish Motorsports teams. One part of the team was dedicated to stage rally, the other to Americas Rallycross. When most people think of the Americas Rallycross they think of people like Ken Block, Tanner Foust and Travis Pastrana running the insane 650 horsepower SuperCars that go 0-60 in less than two seconds. However, there is another class of cars that runs in ARX, the ARX 2 (SuperCar Lites), designed and manufactured by the Swedish rallycross powerhouse Olsberg MSE (OMSE). For those of you who don’t know, the GRC Lites run in a spec class, which means there is very little the teams can change on the cars. Each car has to run the same KMC Wheels (previously Motegi) wrapped in Cooper Tires, the rules also don’t allow any weight reduction or changing of any components on the car; all replacements parts must be purchased from OMSE. 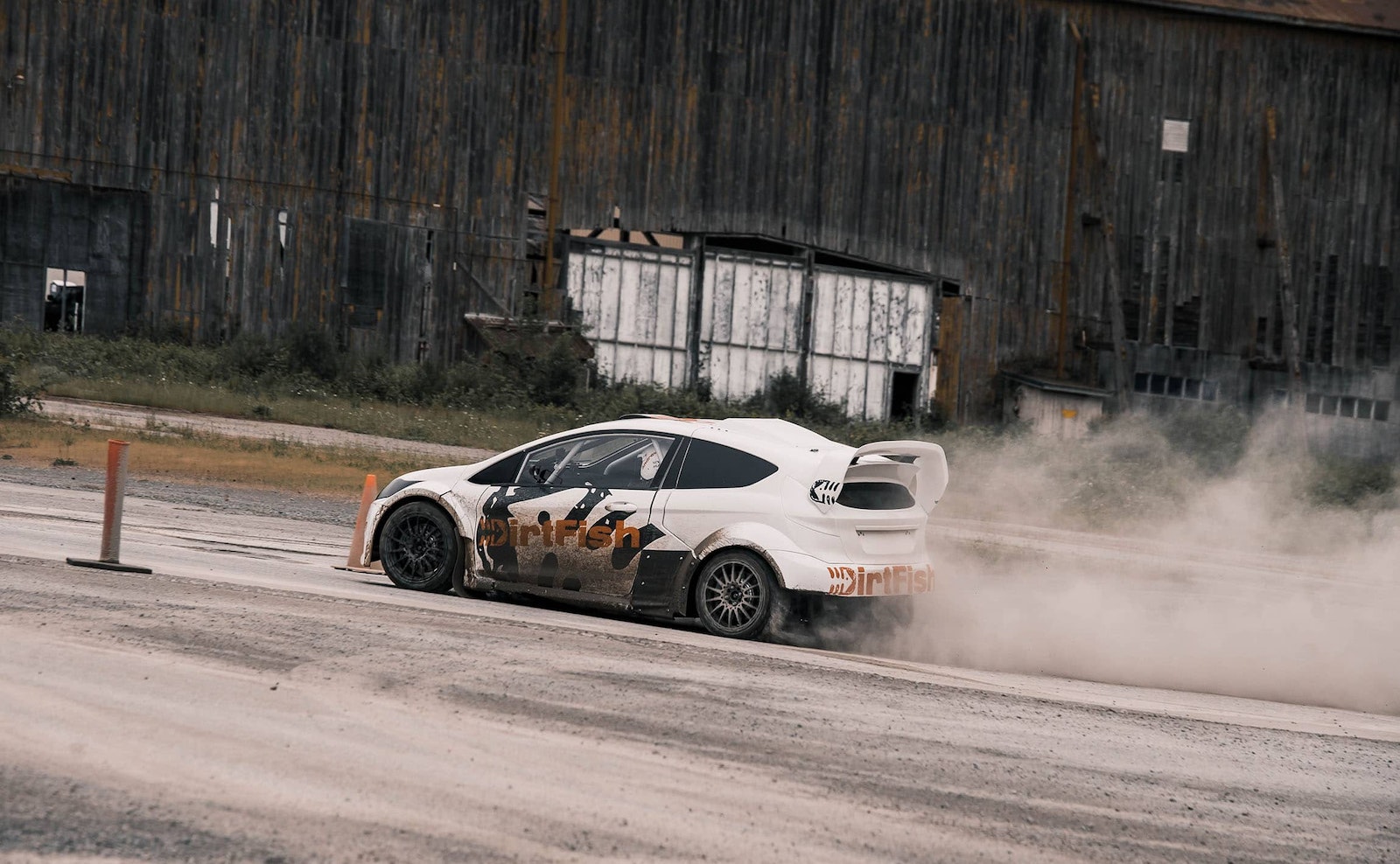 Here is an in-depth look at what these cars are all about and what makes them so cool! 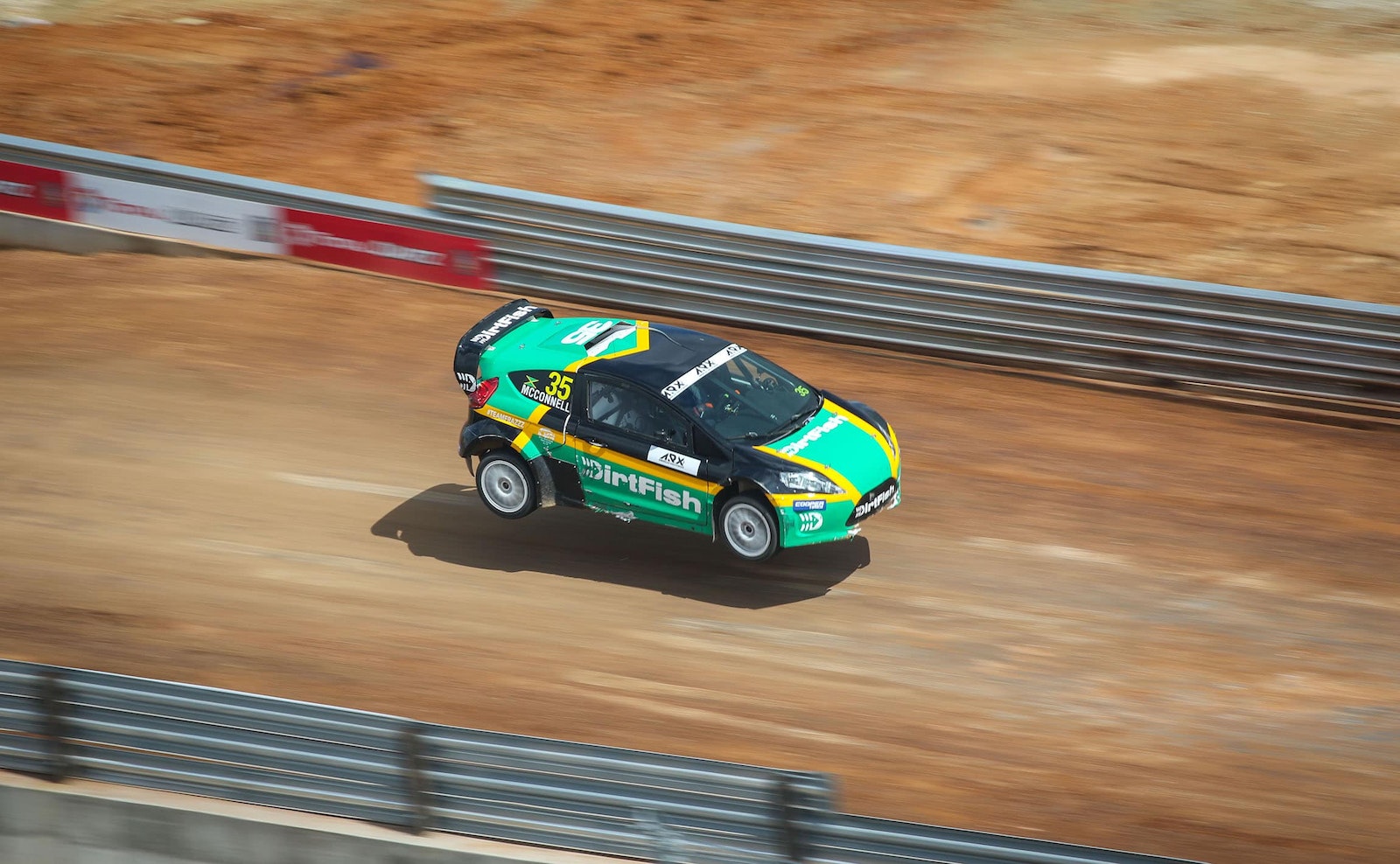 First of all, let’s clear one thing up. There is one common misconception about these cars; most people think they are a Ford Fiesta. While it may look like a Fiesta, that’s pretty much where the similarities end. The tube-frame chassis is completely purpose-built for rallycross from the ground up and is used in multiple series around the world. When you strip away the carbon and composite body pieces, you find the main driver tub and an intricately fabricated tubular rollcage and chassis adorned with custom hardware. The two photos below are a view of what the car looks like completely stripped down. 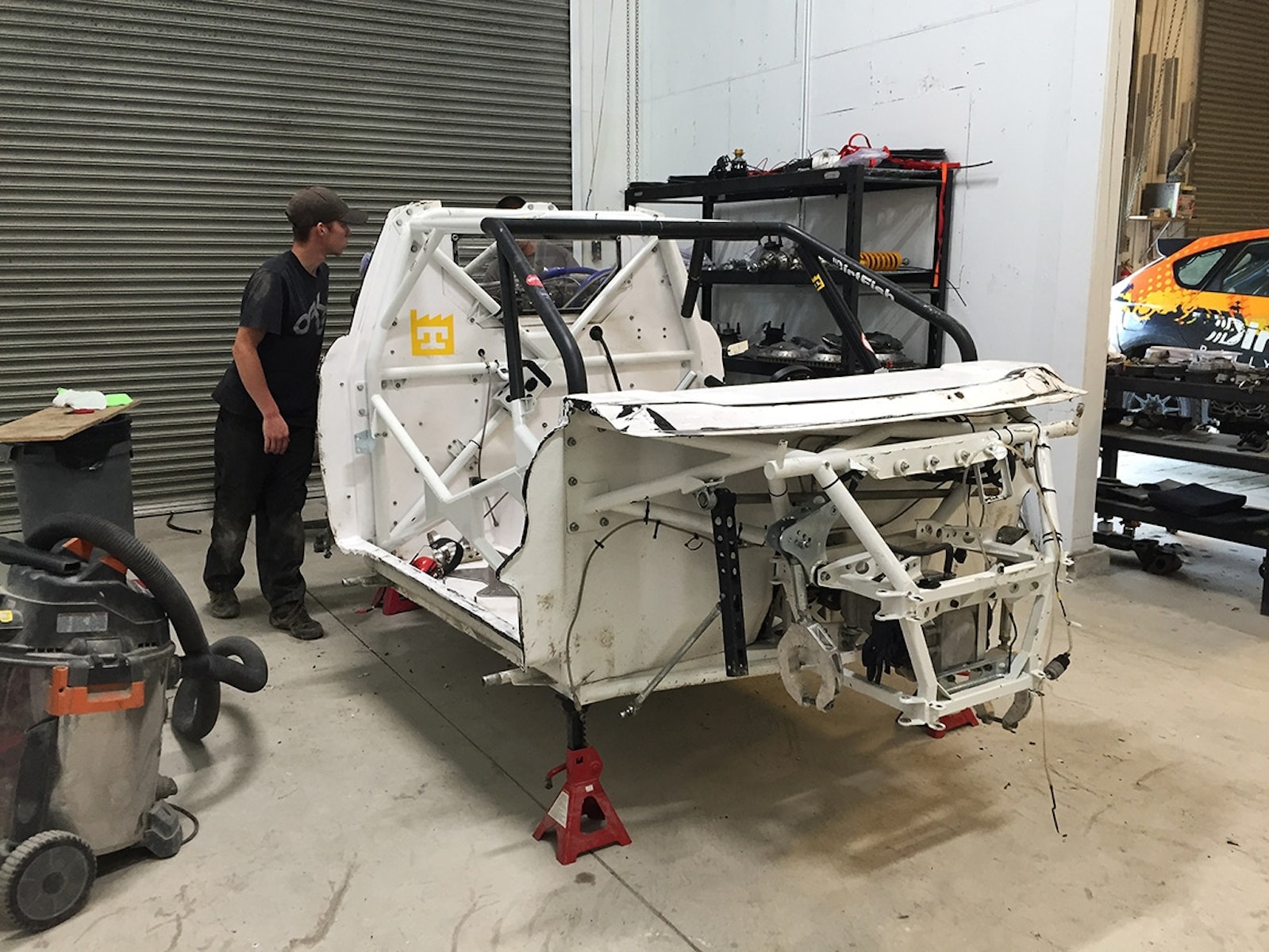 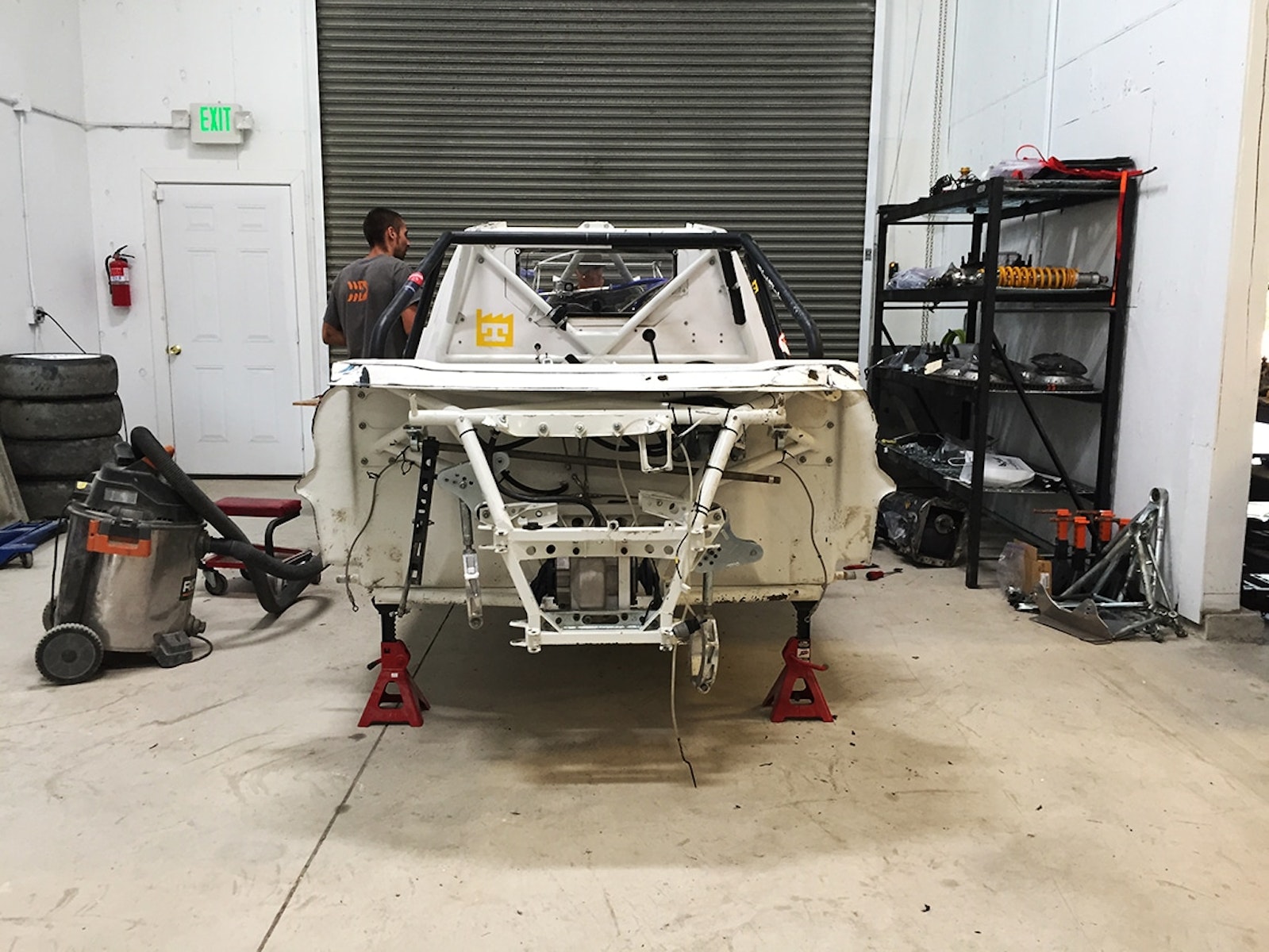 The next key component that you need to make the well-designed chassis move is the engine. It has a rear-mounted 2.4 liter 4-cylinder naturally aspirated Duratech engine with four valves per cylinder, which produces an impressive 310 horsepower and 300Nm of torque and hits the redline at 8,000 rpm. 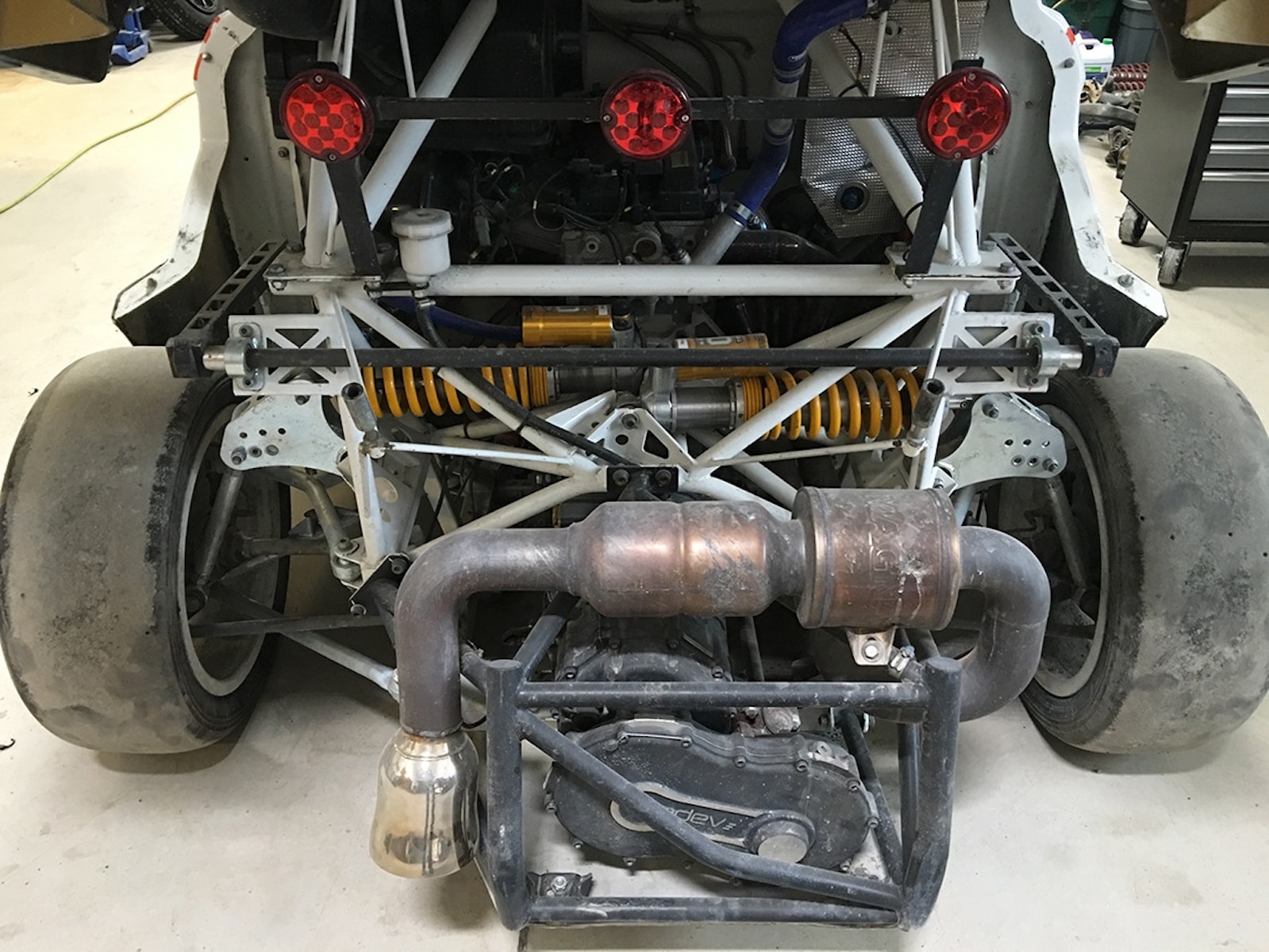 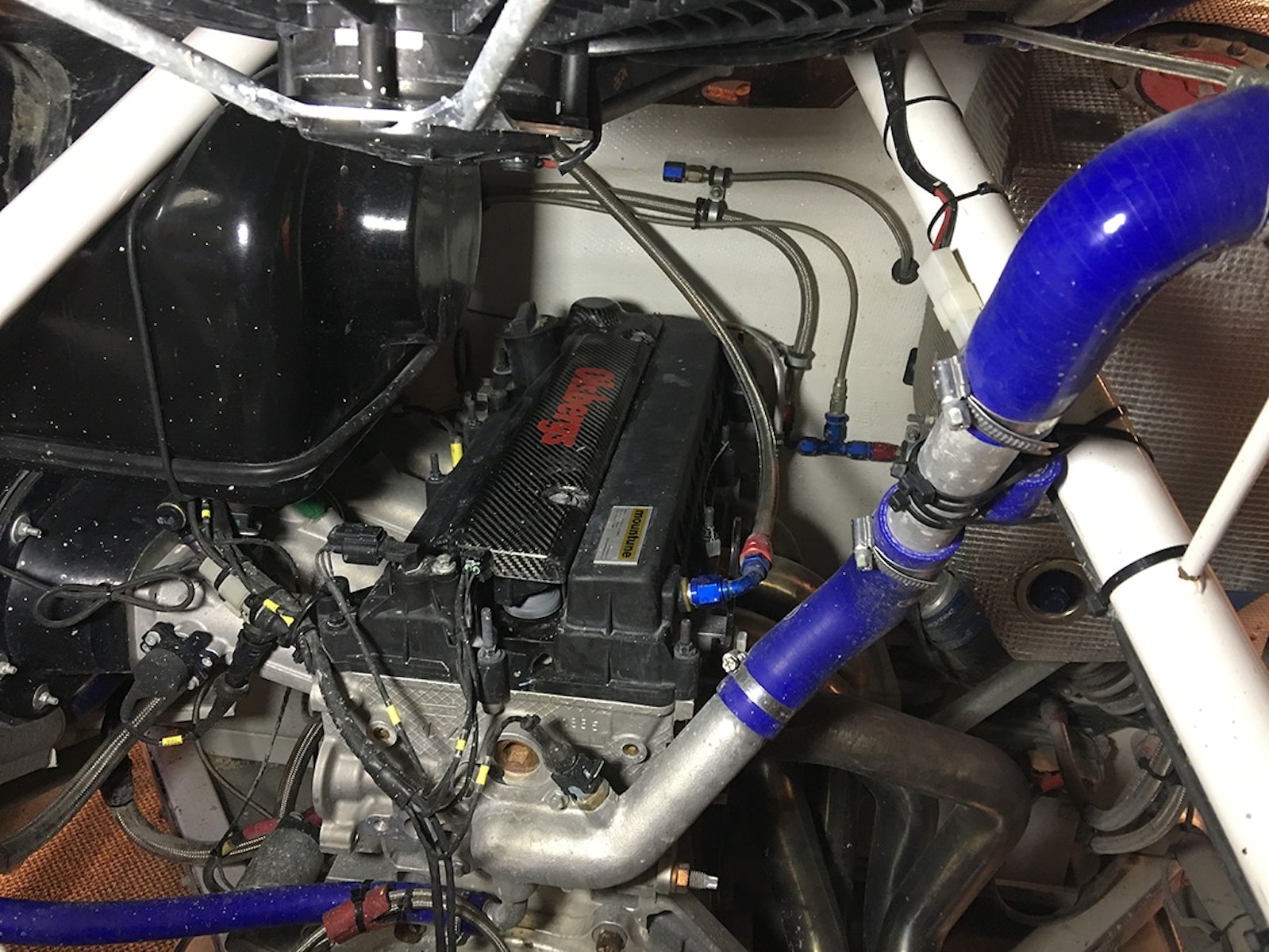 Because of the need to keep the engine well lubricated the car has a dry-sump old system. So, instead of the oil pooling in a standard oil pan at the bottom of the engine and sloshing back and forth during cornering, acceleration and braking the oil is pumped directly from the engine into a separate holding tank that also doubles as an air-oil separator. There are many advantages to having a dry sump system as opposed to a traditional system including a horsepower increase due to less viscous drag (crank assembly rotating through the pool of oil) and a shallower oil pan, allowing the engine to be mounted lower on the chassis. 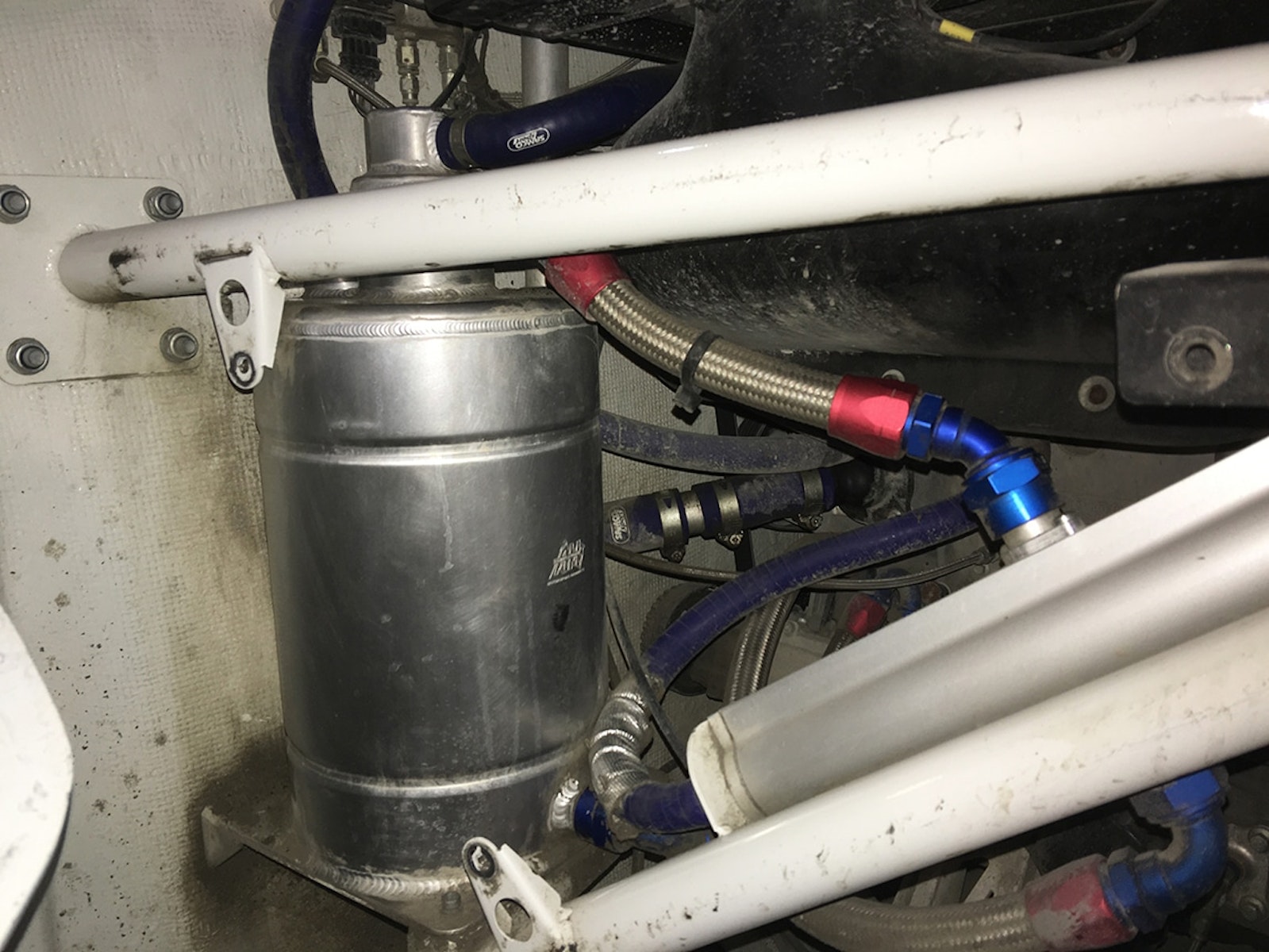 The massive scoop you see built into the top of the rear “clamshell” isn’t just there to look cool; it directs cool air into the rear-mounted radiator and air intake. 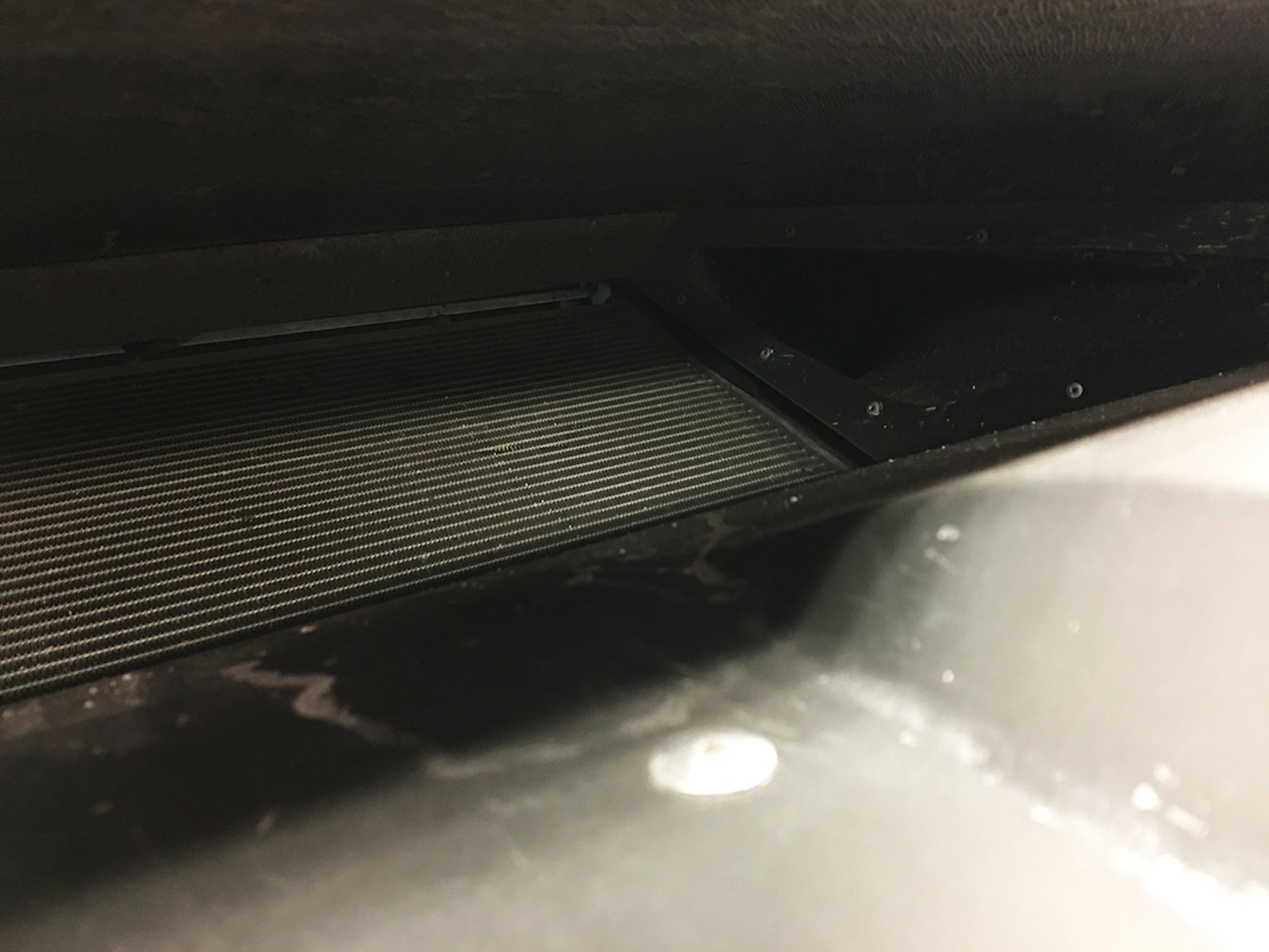 Getting the power from the engine to the full-time 4-wheel drive system, the car is equipped with a SADEV 6-Speed sequential gearbox with an ALCON two-plate clutch and light-weight flywheel, giving the car very fast and near-flawless gear changes. SADEV makes one of the most sought-after gearboxes in the world of rally and rallycross, in fact, it is the same company that supplies the gearboxes for the DirtFish BRZ rally cars. Connecting the gearbox to all four wheels are two limited-slip differentials; the front diff has a 37.5° drive ramp and a 90° ramp under braking, the difference in the rear diff is that the drive ramp is 45° instead of 37.5° with the braking ramp still at 90°. 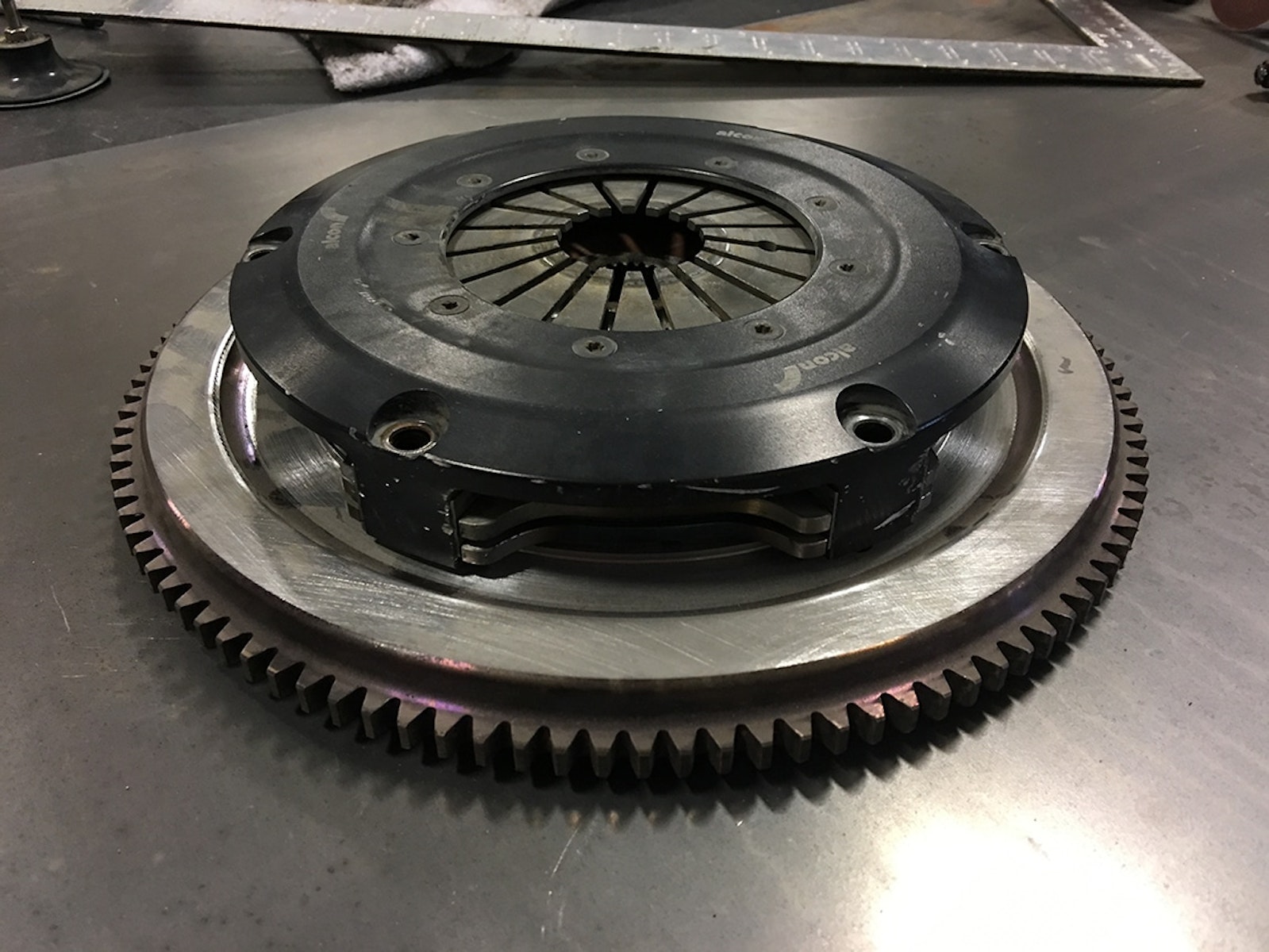 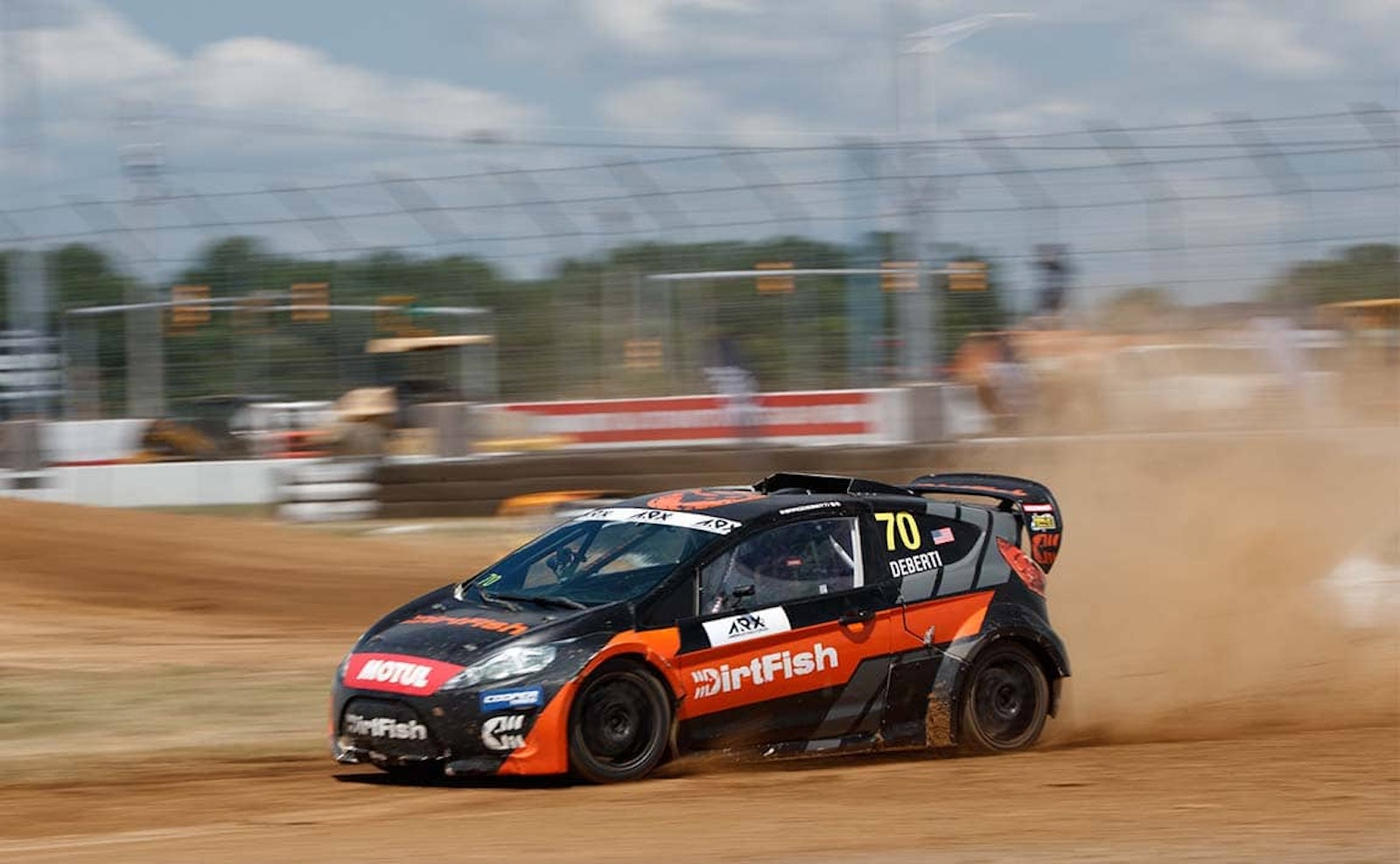 Not only can the ARX2 car get moving pretty well, they also have some serious stopping power with ALCON 330mm disc brakes and 4-pot calipers. Inside the cabin, the driver has an adjustable dual master cylinder and a hydraulic handbrake for tight maneuvers. 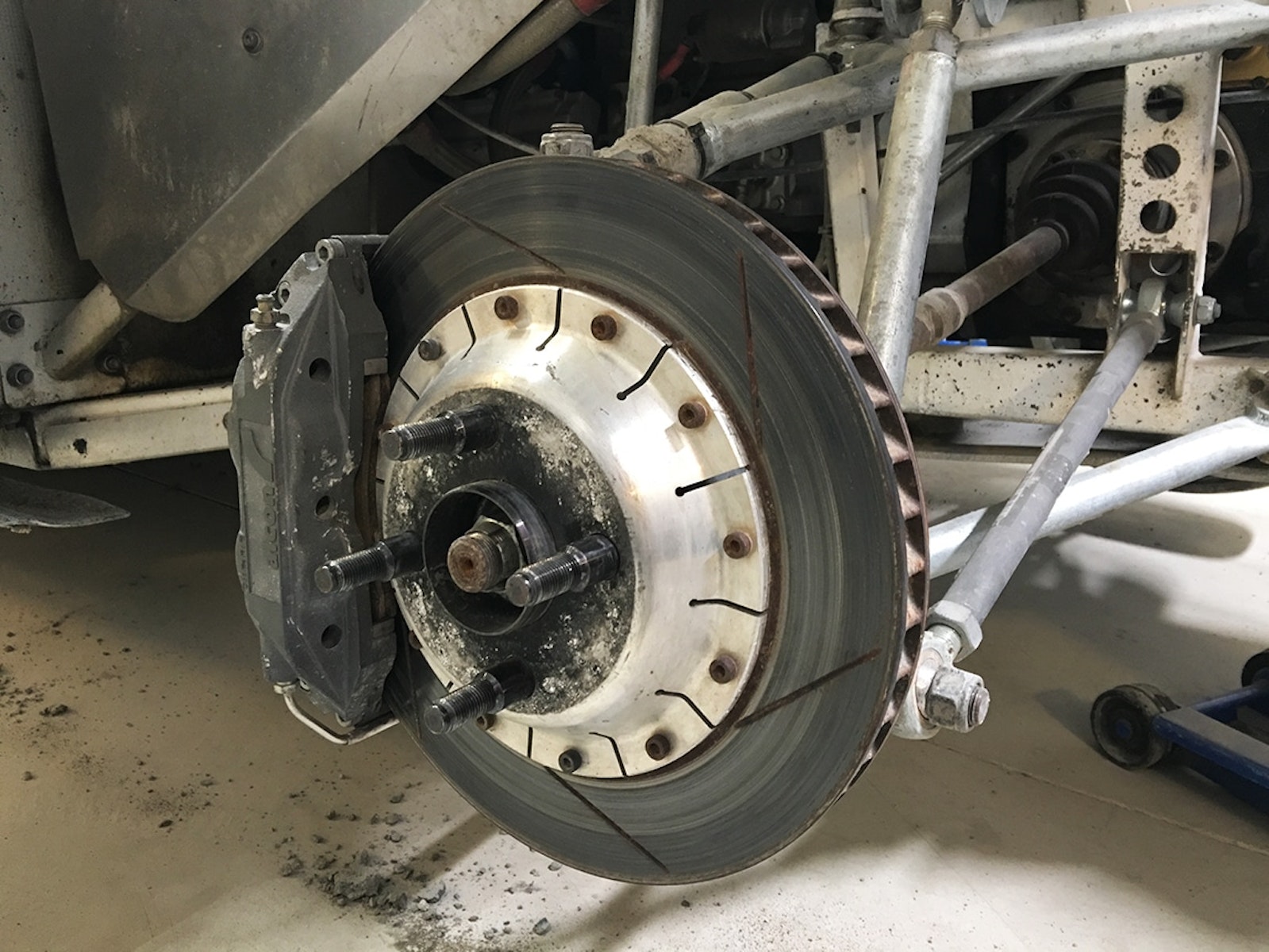 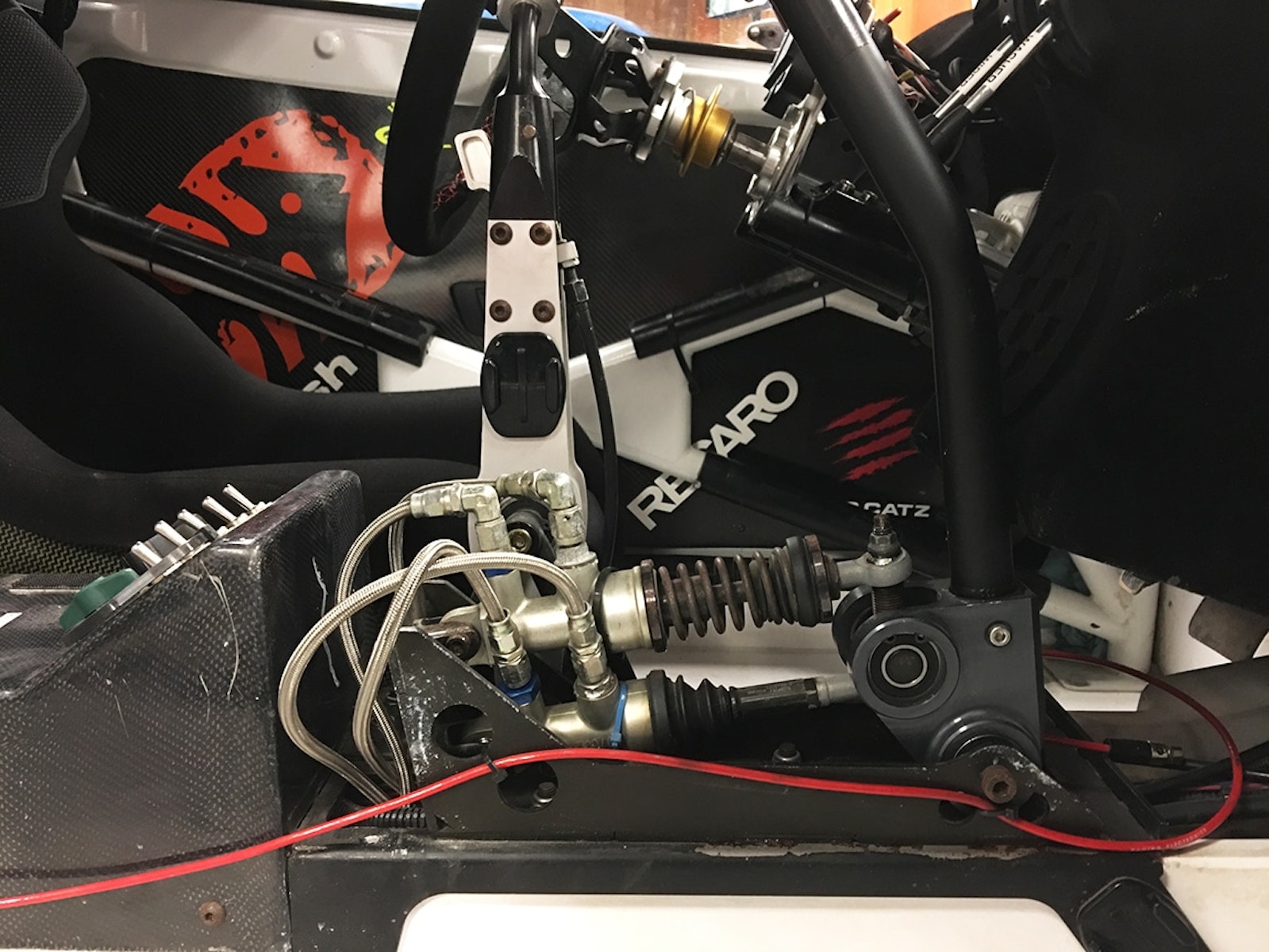 As with any racecar – when it comes to handling, the suspension is very well set-up and adjustable in many different ways. Both the front and rear are equipped with double-wishbone pushrod suspension, Öhlins TTX struts with spring perches that are adjustable for ride-height and tubular upper and lower control arms. Thanks to the tubular components we are able to adjust the camber and caster of the car. In addition to the adjustable Öhlins the suspension travel, stiffness and change whether the sprint rate is progressive or not, there is a bell crank that has six different positions built into it. 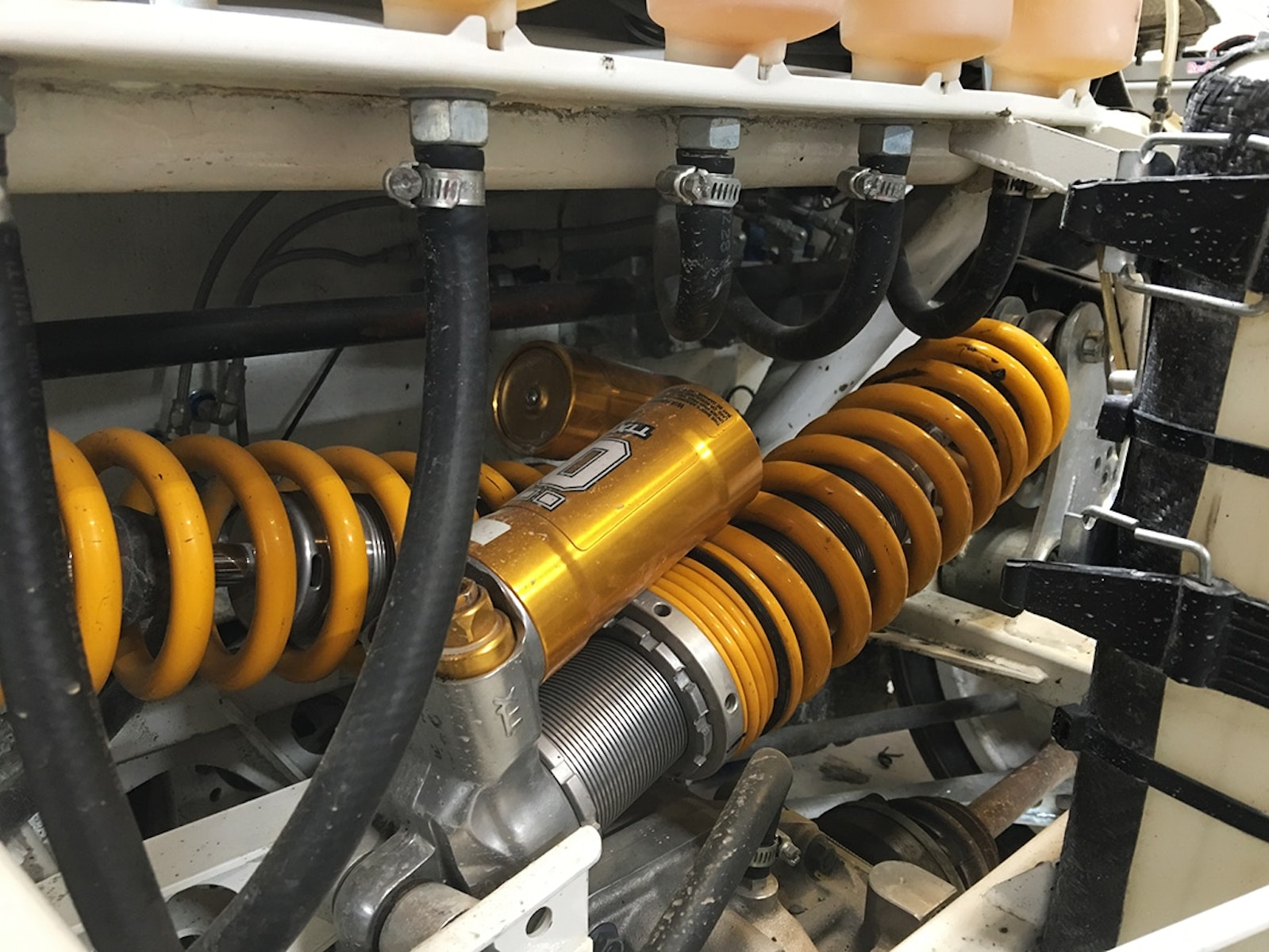 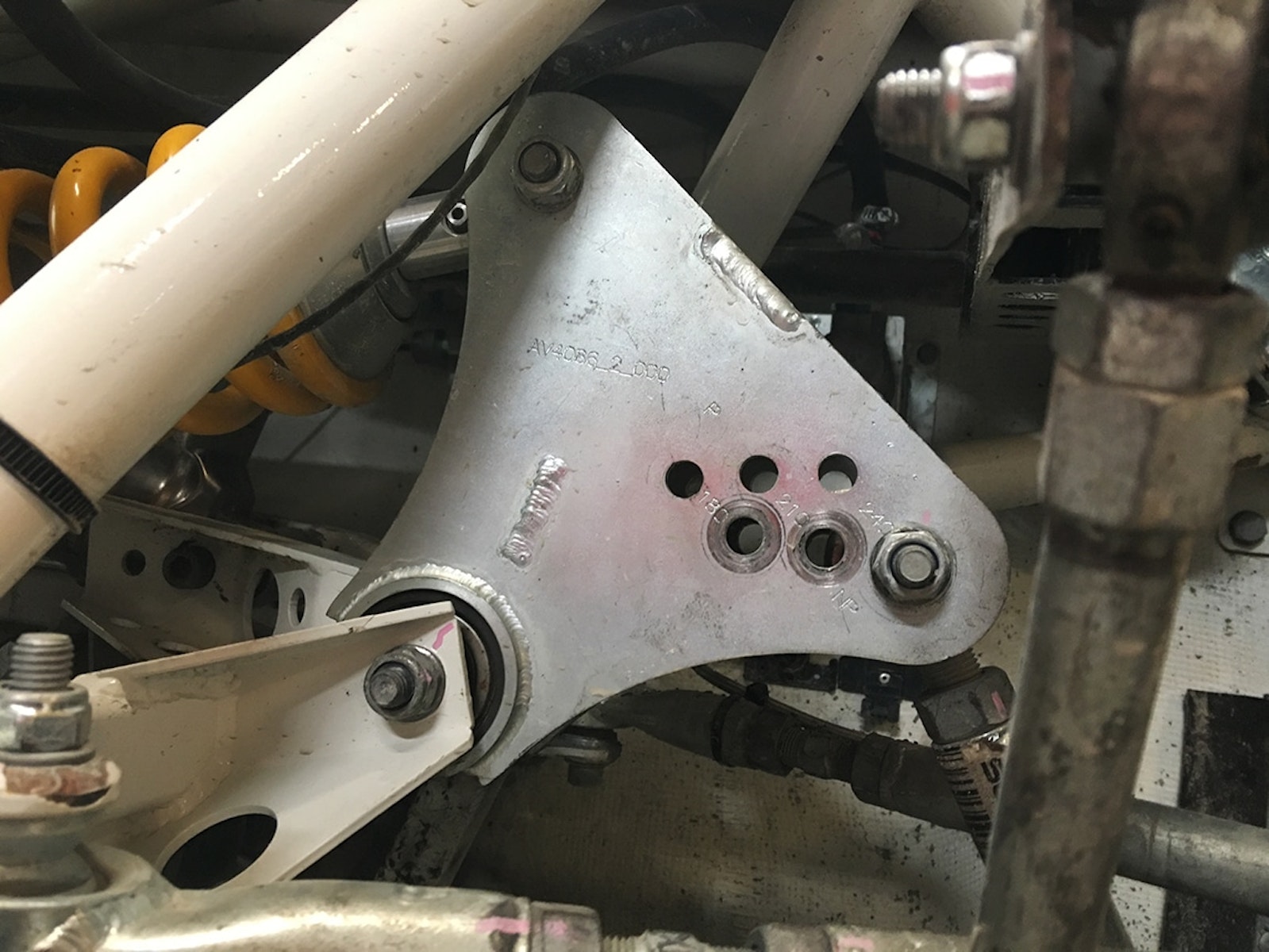 Moving back into the interior, the car is setup with an AiM Data-acquisition system and digital display. The AiM system in the DirtFish Lites car is equipped with a video system, allowing us to view the film and technical information about the car and driver all at once, which can help improve the performance of both. 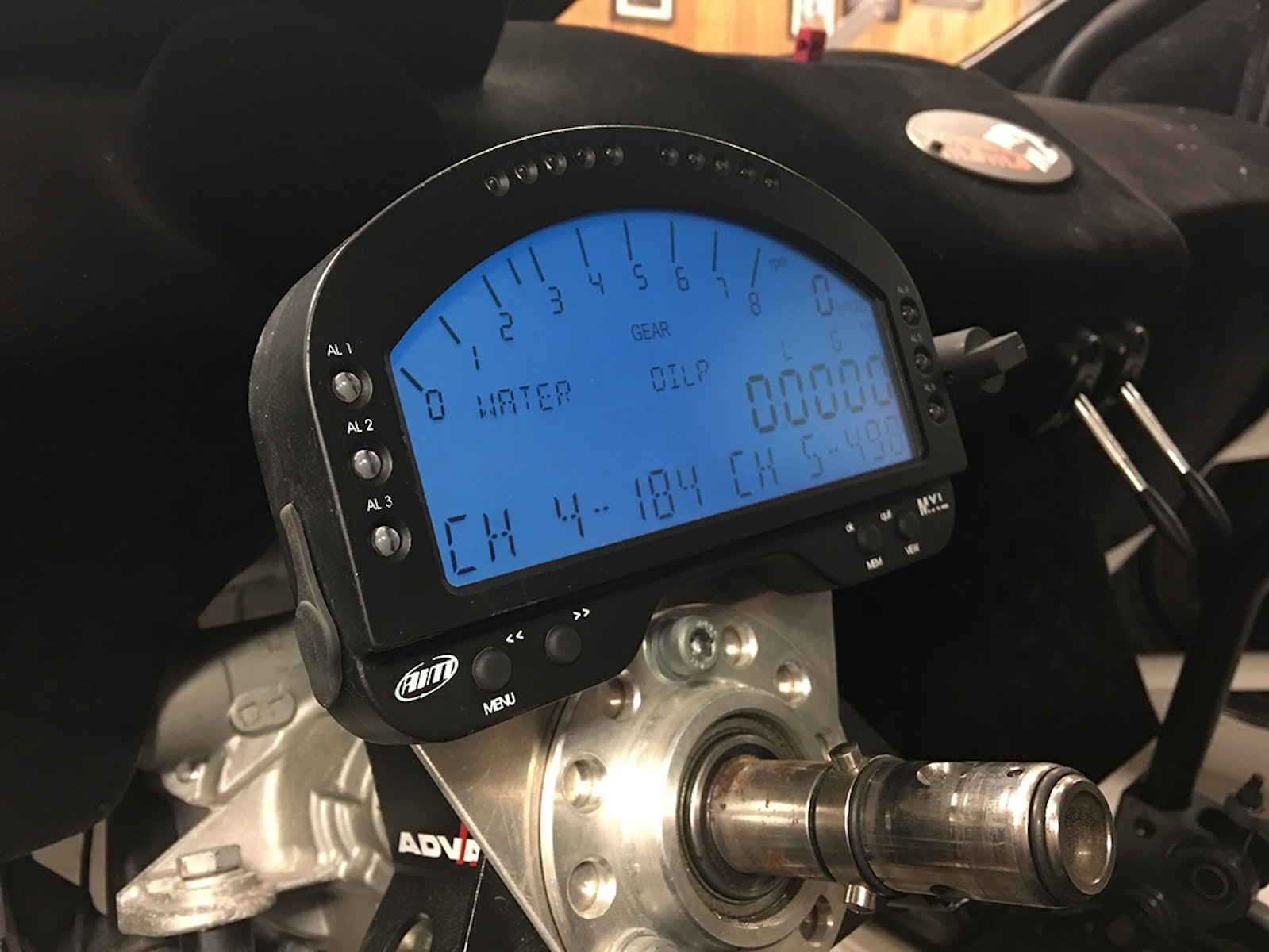 The engine management system is controlled by AEM Electronics’ Infinity ECU, which is required by the spec guidelines set in place by OMSE and the race series sanctioning body. This is a locked system that is controlled by the sanctioning body and only accessible by and AEM engineer. The Infinity is one of the most advanced aftermarket ECU’s and has the amazing ability to process 400 MIPS (million instructions per second). There is also a knob on the center console that allows the driver to adjust the Launch Control, which allows for more or less slip depending on the condition of the surface on the starting grid. 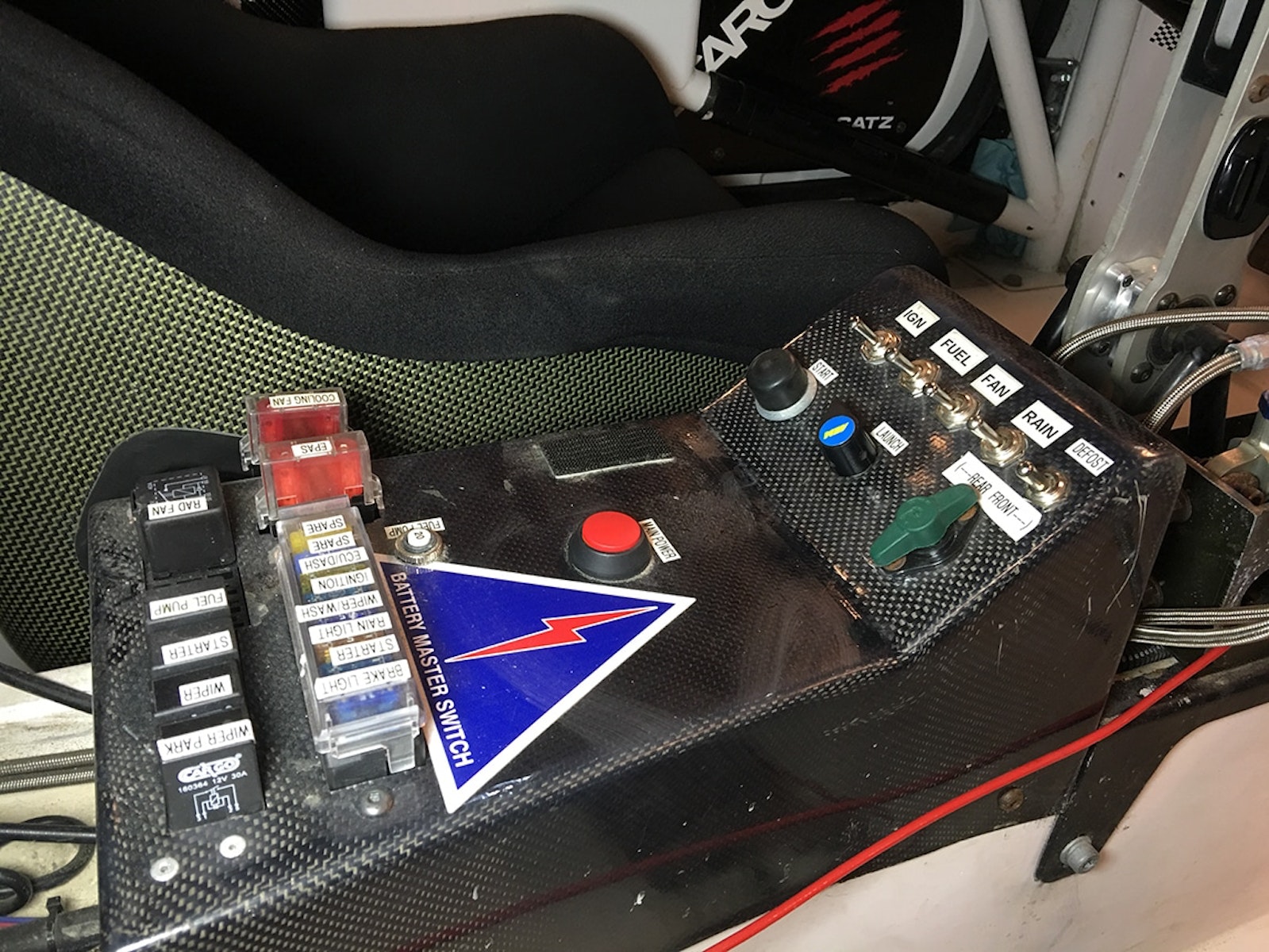 While they aren’t one of the fire-breathing, massive horsepower and torque Supercars these cars are a great stepping stone for anyone looking to get into Americas Rallycross or any other rallycross series around the world. As you’ve seen, they are equipped with some of the best racing technology on the market today.

Here are a few more detailed photos of these awesome cars: 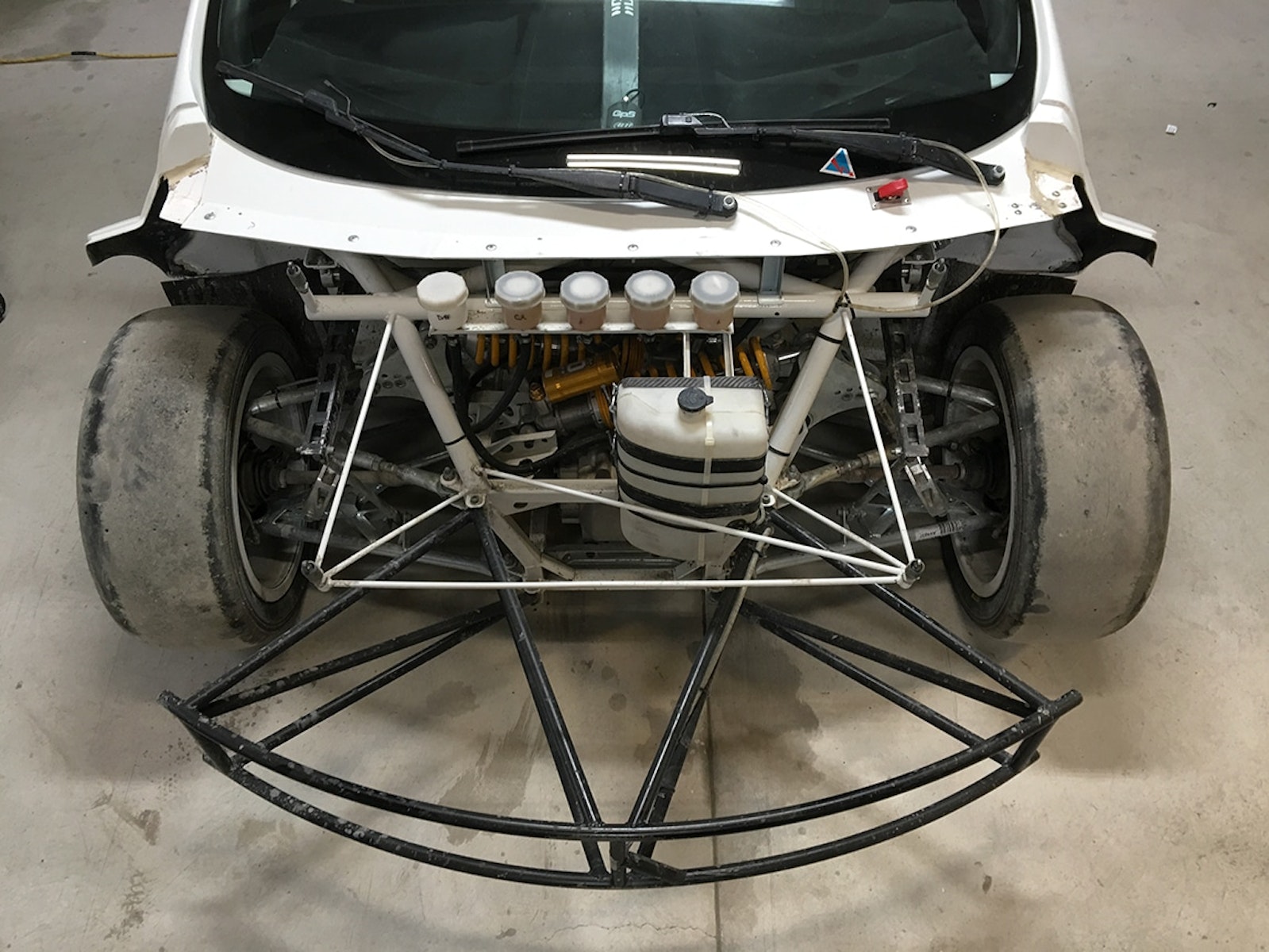 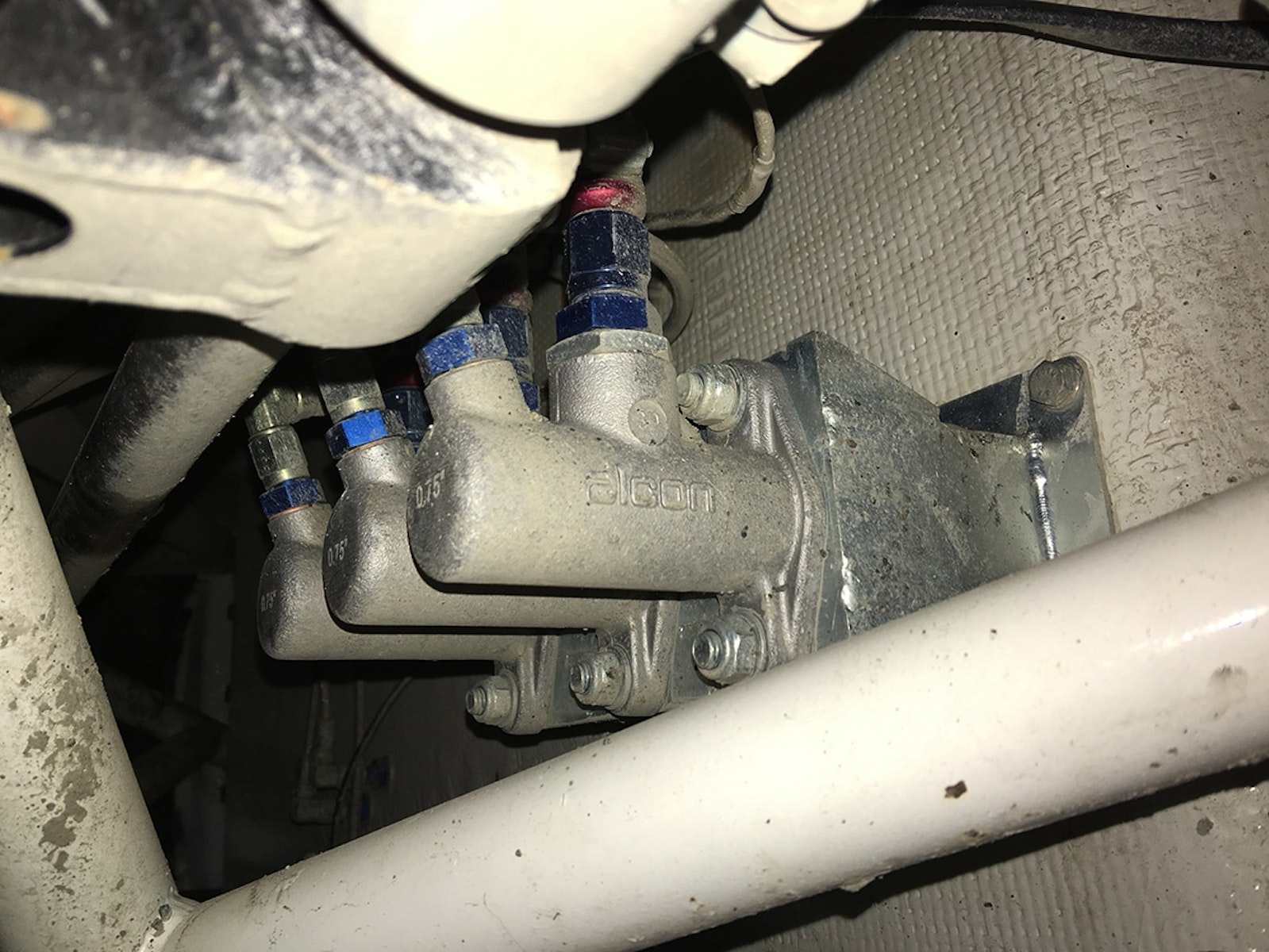 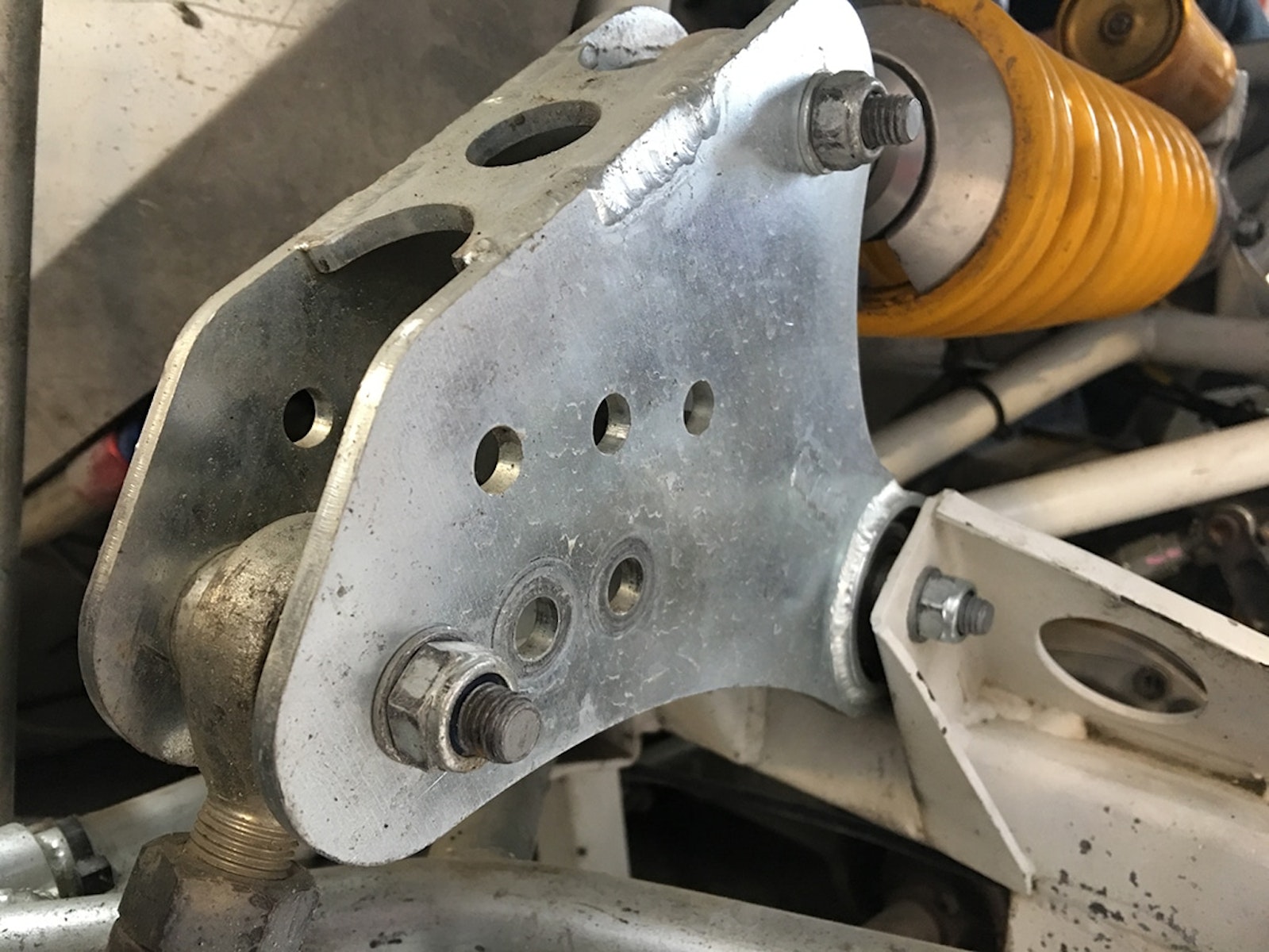 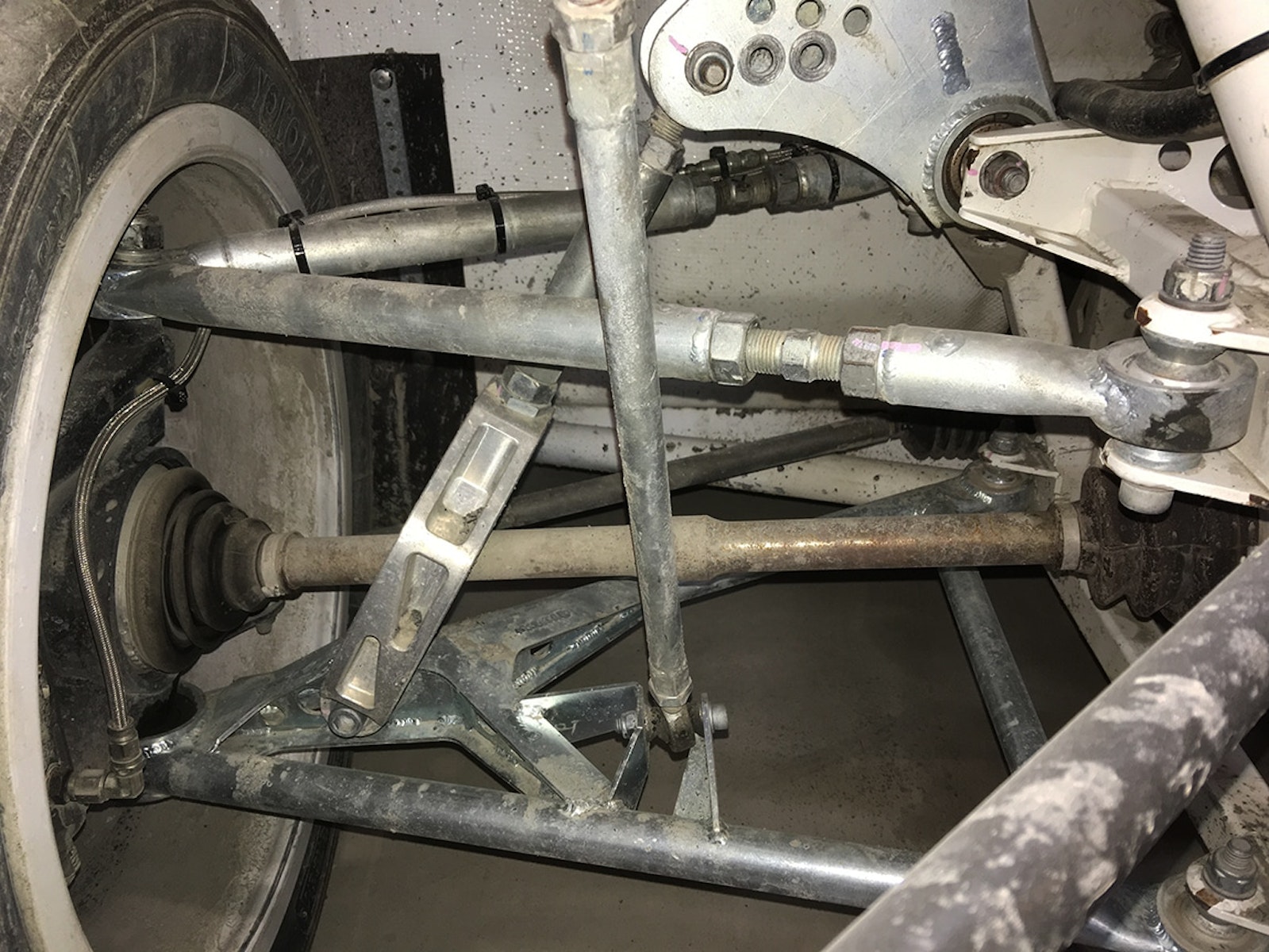